The Twilight Zone of the US State Department 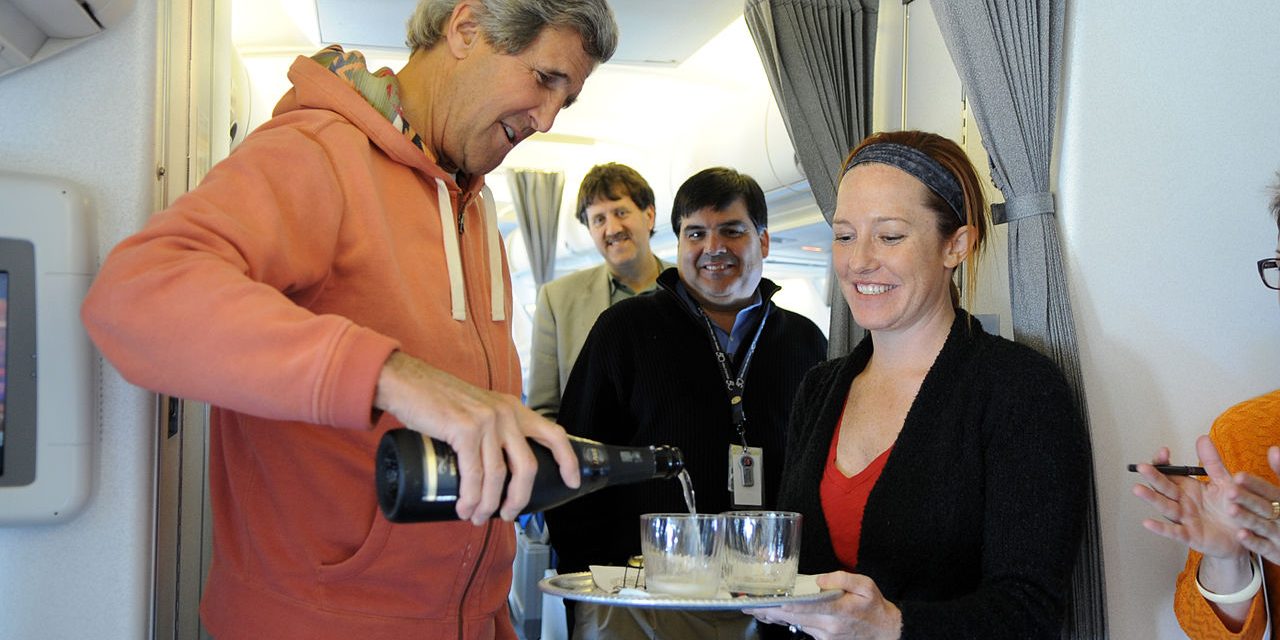 U.S. Secretary of State John Kerry uncorks a bottle of champagne en route from Andrews Air Force Base to Stockholm, Sweden as he celebrates the first press briefing at the U.S. Department of State Department by his new Spokesperson, Jen Psaki, on May 13, 2013. (US Department of State)

The State Department ought to review the list of governments the US had attempted to overthrow since the end of WWII.

“You are traveling through another dimension, a dimension not only of sight and sound but of mind. A journey into a wondrous land whose boundaries are that of imagination. Your next stop … the Twilight Zone.” — (American Television series, 1959-1965)

Lee: President Maduro [of Venezuela] last night went on the air and said that they had arrested multiple people who were allegedly behind a coup that was backed by the United States. What is your response?

Psaki: These latest accusations, like all previous such accusations, are ludicrous. As a matter of longstanding policy, the United States does not support political transitions by non-constitutional means. Political transitions must be democratic, constitutional, peaceful, and legal. We have seen many times that the Venezuelan Government tries to distract from its own actions by blaming the United States or other members of the international community for events inside Venezuela. These efforts reflect a lack of seriousness on the part of the Venezuelan Government to deal with the grave situation it faces.

Psaki: Well, my point here, Matt, without getting into history –

Lee: Not in this case.

Psaki: – is that we do not support, we have no involvement with, and these are ludicrous accusations.

Lee: In this specific case.

Lee: But if you go back not that long ago, during your lifetime, even – (laughter)

Lee: Well done. Touché. But I mean, does “longstanding” mean 10 years in this case? I mean, what is –

Psaki: Matt, my intention was to speak to the specific reports.

Lee: I understand, but you said it’s a longstanding US practice, and I’m not so sure – it depends on what your definition of “longstanding” is.

Lee: Recently in Kyiv, whatever we say about Ukraine, whatever, the change of government at the beginning of last year was unconstitutional, and you supported it. The constitution was –

Psaki: That is also ludicrous, I would say.

Psaki: That is not accurate, nor is it with the history of the facts that happened at the time.

Lee: The history of the facts. How was it constitutional?

Psaki: Well, I don’t think I need to go through the history here, but since you gave me the opportunity –- as you know, the former leader of Ukraine left of his own accord.

Leaving the Twilight Zone … The former Ukrainian leader ran for his life from those who had staged the coup, including a mob of vicious US-supported neo-Nazis.

If you know how to contact Ms. Psaki, tell her to have a look at my list of more than 50 governments the United States has attempted to overthrow since the end of the Second World War. None of the attempts were democratic, constitutional, peaceful, or legal; well, a few were non-violent.