“The Dragon” is there on the neighbor’s land 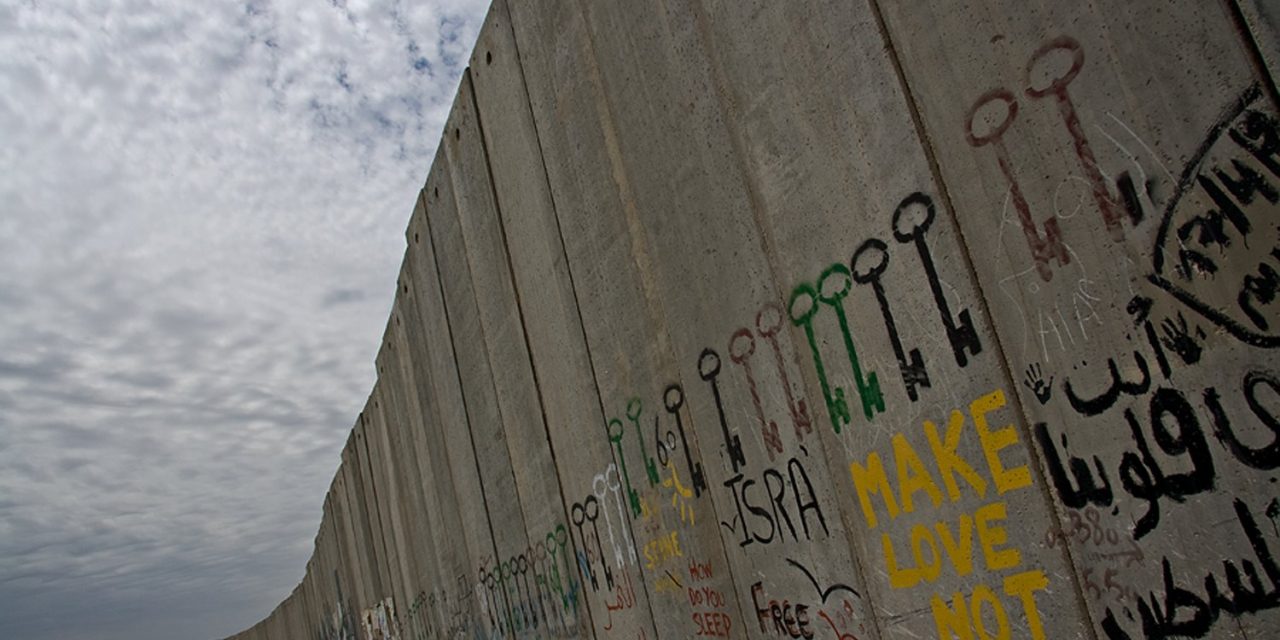 The wall is not built up in Israel, and hardly not on the border between Palestine and Israel. It is built almost entirely on stolen Palestinian land.

I left Jerusalem early and drove south. Soon I had the wall on my left hand side. The wall is enormous where it confines Palestinians who were born in Bethlehem. As a foreigner, a tourist or diplomat, I can easily go in and out. If you are a Christian or Muslim Palestinian, you are stuck.

I continued south, passing Hebron. Abraham is buried there but I did not stop. Drove west, passing through a few small villages. Here, nature is infinitely beautiful with hills and valleys. A mosque appeared in the distance. Stopped and asked for the village I wanted to get to. Continued and soon noted that I had come to the right place. I saw the village and slightly further west the huge Dragon. The dead grey Dragon winding its way through the countryside.

I looked for a suitable place where I could park the car just for a day. In the evening I would return by bus. Just a few hundred metres from the wall, I saw a couple of small shops and a garage. Asked if they were willing to guard the car. Was invited to Arabic coffee. Put on my boots, packed my rain coat, put on my backpack. I began my walk along the Dragon from south to north.

I had been out for two smaller test walks, first with an elderly Palestinian friend. We walked for five hours south of Abu Dis. Met men and women, but mostly children. Zacharias interpreted, I asked questions, but no one came to talk to me. The discussion went through my friend. Tried the next day to walk with a Norwegian. At first felt very good, safe, but we were always very alone. Very few came up to the two Scandinavians. No, walking is something I must do on my own.

Now I was on my way. The road winds its way between the villages. Sometimes quite near the Dragon, often at a distance. I wanted to go near the wall and set off into the wild, but often open countryside. Saw the shepherd, the old man on a donkey, children on their way home from school, an old man resting under an olive tree. Everything takes place in the shadow of the Dragon. It is there, always present. The wall has changed the landscape, the society, social interaction, the economy. It is there but you try to ignore it, as if it does not exist. As if it were death itself.

Afer two hours I had already been invited to three cups of Arabic coffee. The walk was slow. I always found someone who spoke English, often female teachers.

In the outskirts of a small village, I stood on a small mount. Saw how the wall winds its way down the valley and continues up on a hillside. Saw a low, flat, wide military car come rushing on the other side of the wall. It soon caught up with me. It must have passed through the huge gate I had walked by an hour earlier. The car braked and four young boys and girls jumped out. Two automatic weapons were directed at me, not at the upper body but rather to possibly shoot off my legs.

“What are you doing here?” cried one of the men, who felt more as a teenager. A youth with power in his hands. Power to kill or free.

“I just asked what you’re doing here, don’t you understand?”

It felt like all four had lifted their automatic rifles somewhat. They seemed frightened. I was also frightened. Alone with four frightened boys and girls, who would prefer to be at home with mum and dad, with siblings, at school.

“I’m sure you understand what it means to walk.”

“Why are you walking here?”

“Because I have never been here before. I usually walk in places that are unknown to me. Ideally in northern Sweden, but now I’m here.”

“Was that a question?”

“Yes, why do you take so many photos, why are you photographing the barrier?”

I replied that “I think it is beautiful, I would like to meet the architect.”

The youth calmed down somewhat. Said they were only here to protect me, that “they” pointing the gun towards the village, are dangerous. That I should not be here.

“But the villagers are not dangerous to me. I have no weapons. Just a camera.”

I suddenly saw how he danced. High up there, as if hovering on top of the wall. Happy, as if he was listening to music. As if he could not sit still. When he dances, the devil, it is a dance I have never seen before. He is happy. He has succeeded. He looks towards the village, the one I just left. The wall winds its way on the outskirts of the village, like the city walls around Visby. Some houses have been demolished.

The wall is not built up in Israel, and hardly not on the border between Palestine and Israel. It is built almost entirely on stolen Palestinian land. Palestine on one side, the western side, Palestine on the other side, the eastern side.

The devil rejoices that families have been split. Rejoices that land has been stolen. The devil continues to dance. I now hear settlers on the other side of the wall singing victory songs. They have put out mats on the ground. Open bottles of wine, share bread, singing and dancing. Up on the wall, the devil follows this reality theatre. Sees how Rashid also listens to the victory songs, how he hears the joy but does not rejoice, does not sing along. Rashid thinks about the olive trees, the old trees on the little hill. Where he used to let his sheep graze. Where he used to let his white horse rest. On the other side of the wall, there was water for the animals, for all the animals.

The devil continues to dance and rejoice over Rashid being forced to kill and sell all the animals. Only a wall separates. Nine metres high and 700 kilometres long. Settlers sing victory songs between Rashid’s olive trees, they can also lean against the devil’s wall. Rashid talks about everything he has lost. The list is long and includes a lost brother, lost land, lost trees, lost water and lost Jewish friends. He has also lost the possibiity to pray at the mosque in Jerusalem. But that comes further down the list, says Rashid. God hears me when I pray in my lonileness.

The devil sits up there, rests a little, dangling his legs. He has changed clothes, no longer wearing the light dress of the dance. Dresses to fit in. That it was that easy, he thinks. To get them to spend these huge sums to split up, lock up, shut out, destroy.

He sees how the dragon winds its way north. How it destroys, how nature has been bulldozed. How what has been destroyed can never be recreated. Destroyed forever. He laughs when he thinks about the dollar, which finances this madness. It should not read “In God We Trust,” he thinks, it should say something completely different.

I never believed in any devil. I did not even know for sure if I had experienced his dance. I got up, put on my backpack. Looked up. Saw the devil’s work. Saw evil. He featured throughout my walk. He followed me. He was my travel companion. I never needed to be alone. If I ever hesitated I only had to look up, the wall was always on my left hand side. Could touch it. Could touch the work of the devil. Be there when Palestinian youth defied the devil, when they wrote Apartheid on the wall.

An old man stood by the wall. He painted and wrote in green colour. I asked him what he had written with the beautifully winding Arabic characters.

God,
You are larger,
Where are you?

I continued. After seven hours of walking, I was tired. Tired of dancing with the devil. Took a bus to Hebron. Did not have to pay. Changed and continued with a second bus to the village where I had parked the car. Did not have to pay. The morning after, I continued my walk through Palestine from south to north and the corresponding bus rides from north to south.

As I walked, I heard inside of me how the old man continued to ask, “where are you?”

And up there the dance continues – and I, I am never alone.