Apartheid: It’s happening again – and the world is watching 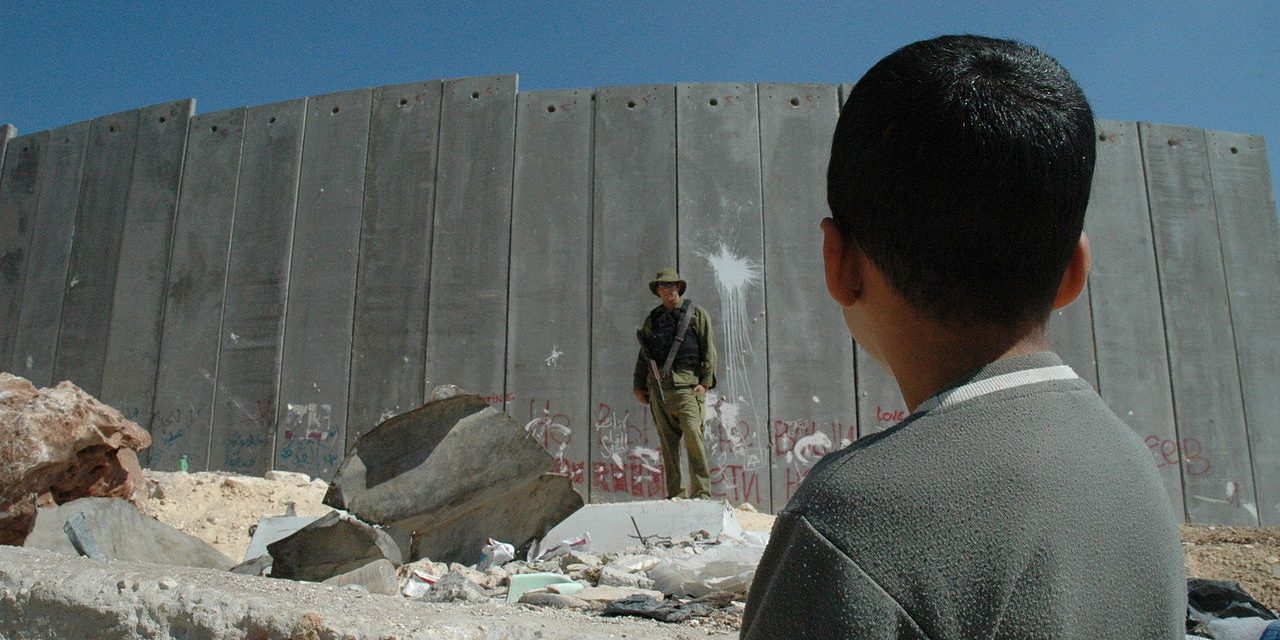 A Palestinian boy and an Israeli soldier by Israel's illegal separation wall in the West Bank. (Justin McIntosh/CC BY 2.0)

That which was once removed is now introduced at a faster speed and with impressive determination.

Suddenly she asks, “What is apartheid?”

She has probably heard me talking about apartheid a bit too much. I have started nagging. She is young. 14 years. I have only known her for less than a year.

To her, apartheid never existed. She doesn’t have a clue. She couldn’t know. And if she had known anything about apartheid, she’d probably think that it couldn’t have been that bad. It solved itself in the end. Today, IS has taken its place.

But now she wants to know and I begin to tell her. I reflect for a second if I know the answer myself. When I start talking, I hear myself repeating stories of my mentor, Tor Sellström. Not as articulate as him, or as visual, but for a moment I am glad to remember the many hours we spent together on Sveavägen and in Pretoria:

It started in South Africa, a country very far away. A beautiful country. A rich country. In this country, there were few white and many non-white. We can call them “the others”. The white came from Europe. With armed force, they took over large areas. The white could never get enough. They wanted more power, more power.

Most white people went to church. They went to an all-white church. In church they were taught that all are equal. God sees all as equal, but here on earth, the white are worth a little more. Not a lot more, just enough. Early on, “the others” started questioning this. It wasn’t right, not fair; they started fighting, but only a little. Just enough.

The white started introducing new laws. Laws that separated, segregated the white from “the others”. The few white people got large areas. Areas where they could harvest. Areas where there were diamonds. Areas with a view of the ocean. “The others”, who were so many, got the left over areas. Not a lot. “The others” continued to fight, or rather – tried to fight. The accessed weapons. Simple weapons. It didn’t work. The white got modern weapons from us in the north. Big ships were filled with weapons and transported to Cape Town and Durban. “The others” accessed weapons through smuggling. They were carried over the border on dangerous roads.

At an extraordinary speed, “the few” continuously declared new laws. Laws that prohibited “the others” from leaving their communities without special passes. If they lived in one area, they could not travel to the next. Different passes were introduced. The system became increasingly sophisticated. Eventually, very few could grasp the surveillance system. Everyone was eventually a part of the system, but not everyone knew about it.

The white and “the others” could no longer meet. In TV, in church, in school they talked about “the others”. The message was always the same. “The others” are dangerous, they are evil. In parallel to explaining how evil “the others” were, they promised safety, the South African police offered protection against the evil.

Appropriate bible verses were found in the New Testament, but more often in the Old Testament. Verses with prophecies which confirmed that they were not stealing, not killing – only doing what they had a right to do. The few had a sacred mission to transform the country, civilize the ignorant. The few were convinced that they had God on their side.

But there were meeting places. The white children met “the others” who changed the white children’s diapers, cooked their food, built their houses, mowed their lawns. They did all the heavy work.

“Ok,” says the girl. “But this happened a long time ago. Why are you talking about this now? It doesn’t exist anymore.”

I didn’t think so either. It was first when I came to Jerusalem, 2003, that I understood that the same system had been established in yet another country. A country that would like to belong to the EU.

The land is stolen, the houses are demolished.

Large areas are converted into military zones. People are crammed together in small areas, trapped in ghettos. They cannot come in and they cannot come out. Now it is no longer in church where verses are used to legitimize the oppression. Now it sometimes takes place in other buildings where one is taught that the country belongs to “us” and not “the others.” Now “the others” are Christian and Muslims speaking Arabic. An ideology is developed that gives the oppressors the right to demolish houses, to steal land, to create military zones, build walls, segregate, kill.

In Knesset, Sharon took over the rhetoric of P.W. Bothas. With similar words and logic. The same underlying message. It worked then! It works now! Will it work tomorrow? It is at the same time a political strategy that divides Israel. The Israeli peace movement and part of the the Israeli media, some Israeli politicians, the private sector are together dreaming about a different future.  Five hundred rabbies urge Israel to stop demolition of Palestinian homes. Stop the insanity.

Israelis and Palestinians live under different laws. Within the same area, some are brought to civil court and “the others” to military court. Continuous confrontations arise. Society crashes. When the settlers take over land and move in, the crash is heard across the whole world. In the White House, Obama reacts and wants the settlers stopped. Obama reacts but does not act.

South Africans visiting or working at the representative’s office in Ramallah see something they thought had been buried – homelands, passes, military laws. That which was once removed is now introduced at a faster speed and with impressive determination.

The world is watching.

Journalists write daily articles that explain and highlight how the innocent becomes homeless or children get killed. Diplomats write secret reports about things that everyone already know. They who opposed apartheid in South Africa were captured and tortured. In the same way, the list of imprisoned young Palestinians in Israel is long. Palestinians who were defending themselves when their house was demolished, land was stolen or when the wall of humiliation was built.

Just like in South Africa, it has taken a long time for the democratic world to recognize the oppression. Still, we cannot call apartheid what it is. Still, we deepen our ties with the oppressor. Still, someone who writes a text like this can be accused of being anti-Semitic.