Gaza: The Terrorist Feels No Shame 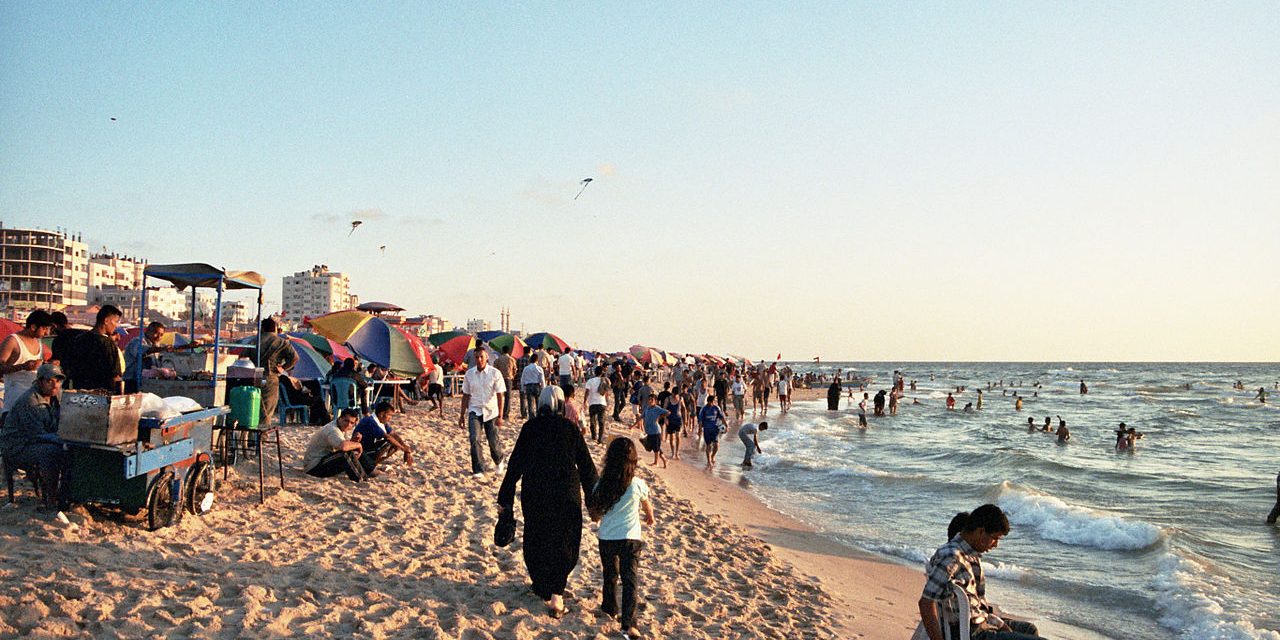 The terrorist strikes in the open. Four dead cousins on the Mediterranean shore...

It is crowded on the Gaza Strip. Very few playgrounds. Besides being crowded, it is also dangerous. Traps everywhere. Houses that were bombed to rubble during the last war have not been reconstructed. Children playing in the rubble get injured. Walls collapse, unexploded ordinances detonate when played with. Everything is missing to recreate the home that disappeared during the bombing. There is no cement, iron bars, aggregates, pipes, tools, wood. There is no electricity, water or sewage management. Everything must be imported and the tunnels are few and narrow.

Now the war has restarted.

The young cousins meet outside the house. A mother asks them to take it easy, but it is not easy remain calm. After days of waiting and hiding, they must now and then be children and break the rules. They run out and sneak off. Children do this. They leave the dilapidated houses, houses that have become targets just like everything else. For the terrorist, everything is lawful and the kids do not have the energy to care anymore, they have already cared for so long.

They leave the sad and the insecure. They hope that it will be quieter down by the beach, sand and sea. They want to get away from the danger, away from boredom; they want to laugh.

They play the same game that I played when I was their age. With my cousin I played American Indians and cowboys. For them it has become Arabs and Israelis. They laugh. It is serious but it is also a game. They can be heard shouting, how they capture the enemy and put him in prison. They are someone else; they are somewhere else. Soon they will play football. They will be in Liverpool, playing at Anfield against Manchester United.

They never get that far.

A few adults pass by on the road above the beach, thinking that they were recently there. They played the same role-plays. They had strong legs. Everything was possible. That was before the neighbor took all their rights, before he got all the rights, before he could kill freely.

The journalists have front row seats at Al-Deira’s hotel terrace. They look out over the Mediterranean. The war is underway just behind the hotel. But right now, everything is quiet.

And then it ends. They never really had enough time. Everything went so fast. Everything happened right in front of them. A journalist who demonstrably sat in the front row reports in The Guardian. Everything happened in the daylight. The beach was like a movie set. As if a Hollywood director staged a bloody scene of the Christmas bombings in Vietnam. It is as if someone wanted the whole world to be a part of it. Not in secret, not in the dark. The terrorist strikes in the open. Four dead cousins on the Mediterranean shore who had been playing the same game that boys play all over the world. The terrorist knows that he is doing wrong but feels no shame.

She has returned. Could not stay away from Palestine. It is the first time in many years that she returns to Gaza. Passes through the gate of humiliation. Goes through the ghetto of despair. She immediately sees how terror has hit, destroyed, razed to the ground. The war has been going on for 48 days. Now it is supposed to have ended.

When she was here last time there was a slow reconstruction going on. Nothing remains. She passes by bombed houses, clinics, hospitals and schools. She thinks about photos she has seen of Dresden and from Berlin. What would never happen again.

She photographs, documents. The newly purchased camera for a short while becomes a form of protection. She notes that this is so much worse than anything she has ever seen before. She has earlier been several times in Gaza, lived in Hebron and in refugee camps in eastern Chad, worked with displaced persons in the Congo, stayed in villages in Senegal, lived many years in Bangladesh and Ethiopia. She compares all images inside of her with what she is seeing. Everything here is so much worse. The destruction has been methodical, thought through. Clinics and hospitals that have been constructed to save lives, schools and homes where people felt safe have been bombed. The destruction has happened with a purpose, it has been planned.

It becomes so clear that what is happening here is not happening by chance. The terror is well thought out. Meanwhile, the world looks on. Condemns gently but does not seem to understand the extent of the massive terrorist attacks. The world does not really seem to care. Instead, it deepens the relationship with those who have killed, killed and killed.

She feels strong emotions, anger, despair. What she had not had to feel for so many years. Now the feelings are back. The war had not ended. It is still quiet in the afternoon. When darkness begins to fall the bombs begin to drop. She has lived her whole life in different countries. Often in difficult circumstances. For the first time she feels worried. The explosions seem to be so close. She leaves the window cracked open so that it does not shatter in case of a nearby explosion. She tries to make the room as dark as possible. Lies down on a mattress on the floor in the office. She tells herself that she should be safe here. For a moment she believes it but reality cannot be shut out. She thinks about how UN schools sheltering children have been bombed. In the dark, she begins to the get the feeling that no one in the Gaza Strip can be sure. Here, everyone is a target; here, the only one you can blame is yourself.

The night is long. She keeps looking at her watch. Thinking of the more than 2000 people who have been killed in the past seven weeks, that is more than 40 people per day. Most of them completely innocent. Their only crime was to remain, that they could not move. Hundreds of women and children. She thinks about all the children who have been orphaned, all the women and men who recently had a baby, the funerals, the injured, the mutilated. But when the bombings end, she mostly thinks that she is afraid. The minutes pass so slowly. The bombs are so many. At three am, she wakes up and notices that a full hour has passed. She is surprised that she could fall asleep despite the bombs.

It is a bit calmer in the morning. She eats a simple breakfast. Had brought some extra things in her backpack. Cannot escape the thought that she lived through the night, a whole night, just one night. That it was so powerful, so diabolical, that she could be so scared.

Only one night. Thinks of this “only” when she sees the children carefully peering out of their windows. Sees children that are only seven years old, who have lived through not only one but three wars. Who have wakened up every night when the murderers have released their bombs. Thinks about children who have seen their siblings killed, mothers who did not return, fathers who have been carried home with blood flowing from their bodies. Walks out on the street, sees people who walk away from her, who walk towards her, people who all carry a story. Thinks that she could randomly select any person and each person could tell a story of deep joy, sorrow, hopes and dreams on hold. That every person carries the deepest secret thoughts that most of them would probably be unable to share.

This is when she begins to wonder if she wants to stay, if she is a good fit for this, if she is the right person. Whether she wants to sit at Al-Deira and see children blown up. Does she want to be the one who constantly writes reports about terror. Compiles reports about what should be rebuilt, while negotiating with those who just recently were the ones bombing, destroying, killing and deep inside knowing that nothing will happen. Reports will be read and circulated. Many will be shocked by the pictures she takes, will ask if they can use her photos. For a moment she will feel proud, for a little while… before the war begins again. How much will be rebuilt before the destruction will restart? How many will be killed the next time? How long will the terrorist be able to continue without shame?