Time to Move Out: The Problem with Mahmoud Abbas and His Authority 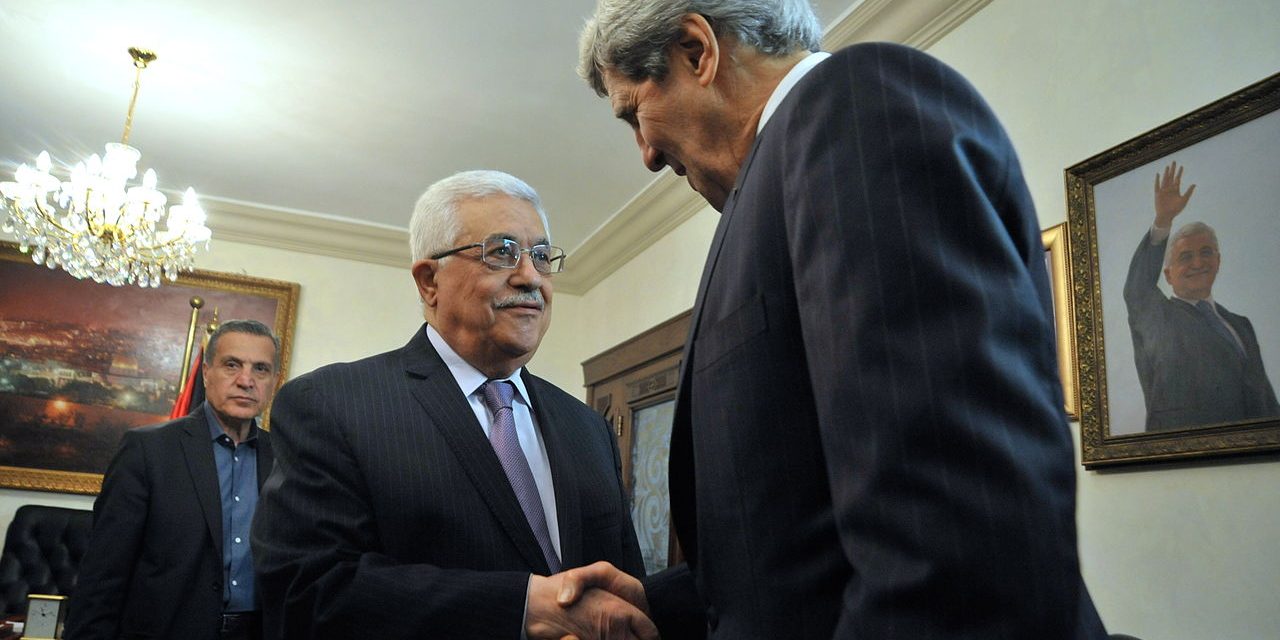 Palestinian Authority President Mahmoud Abbas greets U.S. Secretary of State John Kerry as he arrives for a meeting in Amman, Jordan, on June 29, 2013. (US Department of State)

The move to join the ICC has little to do with the war crimes in Gaza, and much with Abbas’ growing unimportance among his allies, but also his own people.

It was the moment many had been waiting for. On January 2, Palestine’s United Nations envoy, Riyad Mansour formally requested membership at the International Criminal Court (ICC).

“We are seeking justice for all the victims that have been killed by Israel, the occupying power,” he said.

There was no explanation why Palestine’s membership of the Rome Statue (through which the ICC is governed) was delayed in the first place; of why no justice was ever sought for thousands of victims in Gaza, and many in the West Bank and Jerusalem, although such membership would have been granted much earlier.

In fact, in 2012, Palestine’s status at the UN was upgraded, from an observer entity to an ‘observer state’. The move was largely symbolic, since it was an attempt at breathing life in the two-state-solution, which was long dead. But it had one single practical benefit—the coveted membership at the ICC. Finally, Israel could be held accountable for its war crimes; finally, a measure of justice was possible.

Yet, for two years, the Palestinian Authority of Mahmoud Abbas delayed. Not only did Abbas hesitate and carry on with the same tired charade of peace process, but he seemed keen on ensuring that Palestinian unity, even if achieved politically, remained pointless and ineffective.

But isn’t it better late than never?

Agence France Press described Abbas’ move as a “shift in strategy … away from the US-led negotiation process.” Indeed, the US seemed peeved by the move, describing it as “counterproductive”. It will take some imagination to consider what a ‘productive’ alternative might be, considering that the US’ unhinged bias, and unconditional support of Israel had emboldened the rightwing government of Benjamin Netanyahu into carrying out the most hideous of war crimes.

Yet this is not exactly about the killing of nearly 2,200 Palestinians, mostly civilians during the 51-day Israeli war on Gaza last summer. Nor is it about the more than the 400 children who were killed then. Or even the siege on the Strip, the occupation, and illegal settlements in the West Bank and Jerusalem.

Certainly Abbas had numerous chances to admonish Israel in the past, cement unity among his people, use his leverage with Egypt to at least ease the siege on Gaza, devise a strategy that is centered around national liberation (not state-building of a state that doesn’t exist), end the ongoing theft of Palestinian resources by the PA itself, establish a system of accountability, and so on. Instead, he kept his faith in Washington, playing the wait-and-see game of Secretary of State John Kerry centered on a single premise: pleading with Netanyahu to change his ways and freeze settlement construction, which never happened.

Conventional analysis suggests that Abbas’s ICC move was the direct outcome of the expected failure of a UN Security Council resolution that was put to vote a few days earlier. The US, Israel’s main political guardian was, naturally expected to veto the resolution, which would have imposed a deadline on Israel to end its occupation of Palestinian territories. The US used the veto, and only eight member states voted in approval. A day later, Abbas signed the application for the ICC, among others; the following day, the application was formally submitted.

But a ‘shift in strategy’ it was not.

The current political strategy of the PA reflects the unique qualities of Abbas himself, and is a testimony to his impressive abilities to find the right political balance, ultimately aimed at assuring his survival at the helm.

If Abbas’s own political subsistence largely depends on Israel’s acquiescent and US backing, one can rarely imagine a scenario in which Netanyahu and his war generals are arraigned as war criminals before the ICC.

It is unconceivable that Abbas had finally decided to break away from the restrictive role of being an active member of the US managed club of Arab ‘moderates’.

To do so, it would mean that Abbas is ready to risk it all for the sake of his people, which would be a major departure from everything that Abbas – the ‘pragmatic’, ‘moderate’ and conveniently corrupt Arab leader – has ever stood for.

“The move to join the ICC has much to do with Abbas’ growing unimportance among his own people.” [Tweet this!]

So what is Abbas up to exactly?

Since the late 1970’s, Abbas began his quest for an elusive peace with Israel, which ultimately lead to the signing of the Oslo accords in Sep 1993. It was Abbas himself that signed the accords on behalf of the PLO.

Let alone that the accords wrought disaster on Palestinians, and failed to meet a single deadline including the final status agreement, which was meant to actualize in May 1999; it introduced a bizarre culture of revolutionaries-turned-millionaires, operating within the confines of militarily occupied Palestinian territories.

Year after year, the corrupt PA maintained its privileges as Israel strengthened its occupation. It was a massive barter that seemed to suit the interests of Israel, selected Palestinians, and of course, the US itself, which, along with its allies funded the whole scheme.

Late leader Yasser Arafat was clearly not suitable for the job expected of him. Flexible at times as he was, he still had political boundaries that he would not cross. In 2003, Abbas, the ‘moderate’ was imposed on Arafat by both Israel and the US as a prime minister, a post that was invented with the sole purpose of containing Arafat’s control. Following a brief power struggle, Abbas resigned. Shortly afterwards, Arafat died from possible poisoning, and Abbas returned to power, this time unchallenged.

Abbas’ mandate, starting January 15, 2004, should have ended in early 2009. But he decided to extend it by another year, and another, and has since then ruled over the fragmented, occupied nation, with the help of Israel, without a shred of legitimacy, except what he, and his supporters bestow on him.

It has been almost exactly a decade since Abbas ruled over Palestinians. They were years of tragedy, political failure, economic crisis, disunity, and unprecedented corruption.

Yes, the 80-year-old leader has survived, partly because Israel found him the most flexible of all Palestinians (he wouldn’t end security coordination with Israel even after he himself described as the genocidal war on Gaza); the Americans too wanted him to remain in his post, for there is yet to be an alternative leader, who places US-Israeli priority ahead of his own people.

But he also survived because he used billions of dollars funneled by international donors to construct a welfare system, creating a class of Palestinian Nouveau riche, whose wealth was a result of the occupation, not despite it. While the new rich basked in their underserved wealth, the fate of millions of Palestinians were tied to pay checks, which were not the outcome of a productive economy but international handouts.

While Israel was spared the burden of looking after the welfare of the occupied Palestinians as dictated by the Geneva and other conventions, it was left with abundance of funds to expand its illegal settlements.

Somehow it all worked out for all parties involved, save the Palestinian people.

The Search for ‘Victory’

In a sense, Abbas was never really a leader of his people as he didn’t place Palestinian national priority as the prime motivator of his action. At best, he was a political manger, whose management strategy is predicated on finding political balances, and catering to those with greater power and influence.

Following the expiration of Kerry’s deadline of April 29, 2014 aimed at reaching a final status agreement, and another major Israeli war on Gaza that ignited massive anger in the West Bank, which is itself on the verge of an uprising, Abbas’s burden was too heavy to bear.

To create distractions, and to deny the Gaza resistance any claim on victory, he began to hunt for his own ‘victory’, which he would then promote back in Ramallah, amid major fanfare and celebration of his supporters. With every such symbolic victory, Palestinians were inundated with new songs of Abbas’ supposed heroism, as his mouthpieces traveled the globe in a desperate attempt to reassert Abbas, and the PA’s relevance.

And after much of delay and haggle, Abbas was forced by sheer circumstance to resort to the ICC, not to criminalize Israel, but to win political leverage, and to send a message to Israel, the US, and others that he still matters.

The move to join the ICC has little to do with the war crimes in Gaza, and much with Abbas’ growing unimportance among his allies, but also his own people.

The problem with Abbas, however, is bigger than Abbas himself. The ailment lies in the very political culture and class that sustained and benefited from political corruption for over 20 years.

Even when ‘President Abbas’ is shoved aside, due to old age or whatever else, the malaise will persist; that is until the Palestinians challenge the very culture that Abbas has painstakingly constructed with US money, and an Israeli nod.