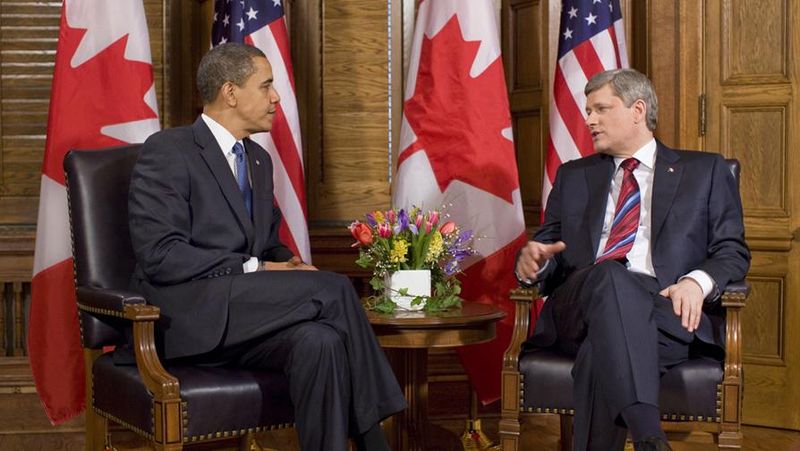 Canada has been the yappy little terrier trying to front run the U.S. imperial hegemon

It is the time of year for the mainstream media to make its lists, check them twice with the pundits, and find out who is naughty and who is nice. While not officially a year-end review, I have recently commented on Evan Solomon’s interview with General Breedlove in which mostly softball questions without curves or spins were gently lobbed at the General—who did a reasonably intelligent job of responding considering the knuckleball attempts on some of the questions. The next year end interview I viewed was between Peter Mansbridge, CBC’s senior correspondent, and Stephen Harper, Canada’s neo-Conservative head of state. As with the former interview, the Mansbridge interview was rather innocuous, with responses essentially reflecting Conservative canards about the economy, climate change, and foreign affairs.

After a brief introduction that actually contained the most powerful statement of the whole interview (and was ignored by Mansbridge), the first topic was climate change. Mansbridge introduced two quotes from Harper at the June 2007 Berlin climate change discussions and questioned Harper about his “walking the walk” comments. The reply did nothing more than reiterate the Conservative’s talking points, dissimulations, and evasions.

Harper indicated “bold action” was needed by everybody. He then said, “we are phasing out the use of traditional dirty coal…the biggest single GHG emitting source in the world. If they would just follow our lead, we’d have the problem solved.” Well, not quite. If everyone followed the province of Ontario’s lead, the problem would certainly be ameliorated. Except that Alberta’s tar sand production GHG emissions are increasing.

Well, okay, yes, GHGs in Canada have decreased from 2005 to 2011—except not under Conservative guidance, unless Harper wishes to claim credit for the economic recession that started in 2007-08. At that point, emissions dropped significantly as a weaker economy consumed less carbon fuel; after things stabilized, the new normal, GHGs began to increase again and have been doing so ever since. So much for federal government policy—oh which by the way, is supposedly done through “a scientific evaluation process,” a laughable comment coming from a government that has fired many scientists, stopped many environmental initiatives, and muzzled and collared the few scientists remaining working for the bureaucracy.

This discussion derived from comments about the Keystone pipeline.  While using the usual talking points for the Keystone project, Harper displayed a good degree of hypocrisy. He noted that, per energy resources, “We don’t direct the marketplace” and that “Ultimately it is up to the marketplace,” and the “scientific evaluation process…directed by others.” So somebody directs it? This could refer back to that first comment in the introduction that I will get to in a moment, but to argue that the “market”—this magical force of human mythology—is not directed is a lie, there are no ‘free’ markets in today’s highly financialized, manipulated, and controlled world.

Continuing this line of argument on climate change, Harper argued that “what is crazy would be for us to impose costs only on our industry in a way that would not reduce emissions but simply shift jobs and development to other parts of North America. That makes no sense.” But it makes sense to have lost manufacturing jobs under NAFTA “to other parts of North America [Mexico].” So what is your solution? None were offered.

After Keystone and climate change, the questioning turned towards “jihadism,” one of Harper’s favorite topics. Canada’s role alongside the U.S. imperial role was not questioned (certainly it never would be in those terms!) but whether the role would be extended in six months and to what degree was questioned.

The questions then naturally turned to the recent lone wolf attack on Parliament hill by a nutcase gunman.  Harper’s take on the overall situation was that, “We’re not at risk from ISIL because we’re fighting them, we’re fighting them because we are at risk from them.” Perhaps neither is true: they pose no risk to Canada, at least if Canada would mind its own business and not support the U.S. imperial drive and the Israeli occupation of Palestine (which was the original source of terror prior to the “new Pearl Harbor” of 9/11). Of course it is Harper’s dream to have a few terror incidents in order to instill the ‘fear of the other’ across Canada—thus finding a focus for distraction from his own foibles; and then to try and be able to appear as the tough talking fearless leader (regardless of closets) who is in control of Canada—thus finding a focus for distraction from his own foibles.

Success of neo-Conservatism in Canada

There were three final questions, the first on Veterans Affairs, and the second on the problem of the missing women of the First Nations. Both received rather platitudinous answers without much positive forward action being mentioned. The third question was more of a self-evaluation task on how the nine years of Harperism had worked out. The latter comments proved quite interesting and return the idea to my original teaser opening comment about the most powerful comment.

First, the final self-evaluation. Generally, “I think if you ask any objective analyst right now in the world, what’s the politically and economically most stable country in the entire world right now, they would say Canada. There’s no reason for us to change that. What we want to do is entrench that.” [italics added]

And that, “Canadian approach to foreign affairs which is that we take stands, clear stands based on our values and interests….whether it’s jihadism or Russia or some of the events in the Middle East, I think the truth is that we’ve been well ahead of the curve.” [italics added]

And then, “I don’t want to say if you’re not a Conservative you’re not really Canadian. I don’t think that would be fair. Um but look, I think we’re a country that’s pursuing good conservative economic, security and foreign policies.” [italics added]

First, yes we are stable with a majority government that wants to entrench its particular sense of stability (clear majority, no questions, do it my way). Secondly, for those who have read my previous writings on the topic, Canada has been the yappy little terrier trying to front run the U.S. imperial hegemon, well ahead of the curve of demonizing Russia and Muslims for the general purpose of controlling the U.S. fiat/petro-dollar and protecting the occupation of Palestine.

Finally, you may not want to say it, because that “would make the situation a bit tricky,” seeing as how you only have eighteen per cent of the population actually voting for you, which in Canada’s idiotic first past the post system allows you to govern.  The good conservative economic, security and foreign policies that are derived straight from the heart of corporate Republican America are good for one thing only, your ultimate dream that you stated at the beginning of the interview, “I think we’ve got the country on the right track but I would like to take some more time to put it on that track in a very permanent way.” [italics added]

That one statement is the most important of all these, expressing the megalomania of a man wishing to assume full control of all aspects of Canadian life for all time. It makes all these other issues—other than for the direct impacts of the people involved within the veterans affairs comments and the indigenous women’s comments—pale by comparison.

So what is to be made ‘permanent’? Trade agreements that place corporations above the control of the sovereign government, corporations that have no responsibility towards the environment, or their workers, or society in general (there is nothing ‘free’ about trade agreements). Trade agreements that allow foreign corporations to dominate and control our markets (ironically, China will probably get there regardless as they buy up Canada’s energy resources). The executive control of the government by way of the PMO and its unelected staff so that there is ultimately only one supreme leader.  The privatization of whatever can be privatized—regardless of the value to the Canadian public outside the profit motive—for the conservative desire for profits for the corporate elite.  The disenfranchisement—even more so than now—of all First Nations people, so that their land and resources can be privatized and corporatized for more profits to the elites.

One has to consider ultimately, the idea is that of “Fortress North America”, with Canada tied up alongside U.S. foreign policy directives, tied into a continental energy market that serves mainly the corporate elites and the military. True there may still be an imaginary line at the 49th parallel, but structurally we are being integrated into the imperial hegemon at a corporate level above and beyond an independent sovereign nation.

Fortunately, permanence is impossible in human political considerations. Unfortunately, the megalomaniacal desire for permanence bodes poorly for the future of an independent sovereign Canada, in spite of the neo-Conservative jargon and rhetoric about Canadian values.  Also unfortunately is that we have a mainstream media that increasingly does not seem capable of posing difficult questions about the corporate militarization of the world for the global hegemon…

…more on that as I deconstruct Baird’s interview with Evan Solomon on foreign policy, coming up soon.