A Tale of Two Girls: Malala and Nabeela 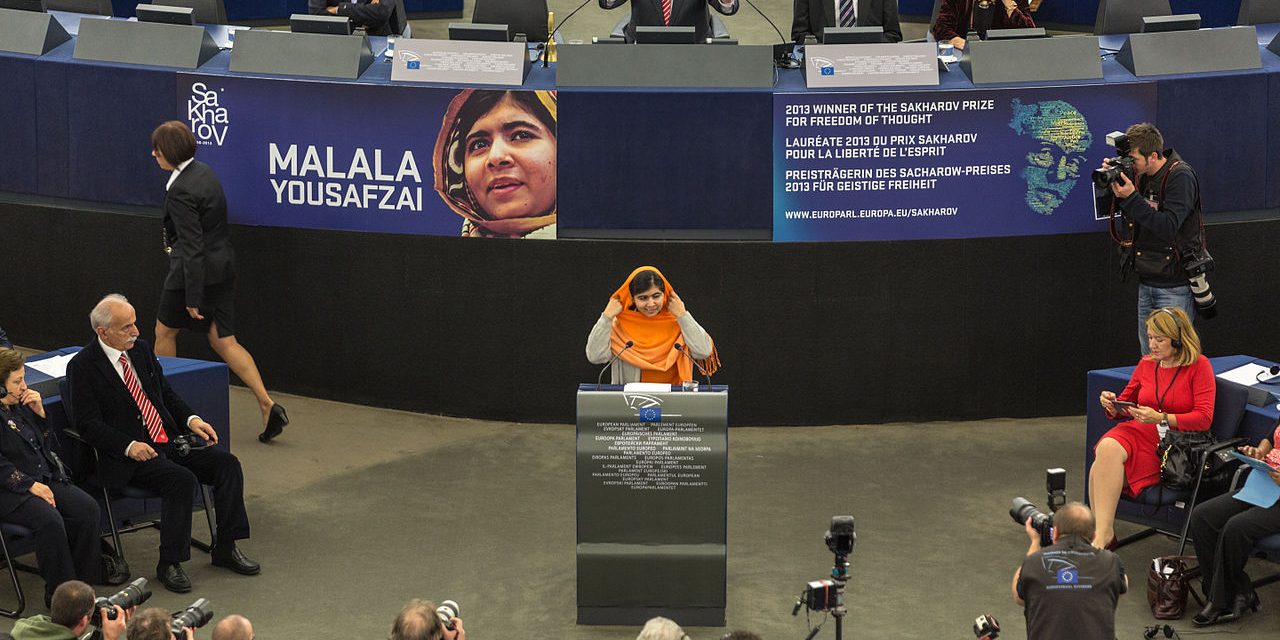 Malala Yousafzai was awarded the Sakharov prize for freedom of thought by the European Parliament on November 20, 2013 (Claude TRUONG-NGOC/Wikimedia Commons)

So Malaya Yousafzai recently won the Nobel Peace Prize, and everyone all around the world is singing her praises. Rightfully so.

In fact, Malala’s case is probably the only one wherein all media verticals seem to be in absolute agreement, be it Al Jazeera, or Press TV or even Fox News. That girl deserves praise for her efforts.

However, whilst Ms. Yousafzai was receiving her Nobel Prize, my attention was drawn towards the case of another young girl from Pakistan: Nabeela Rahman. Much like Malala, Nabeela, too, recently traveled to the Western part of the world, albeit the latter went to USA with an altogether different purpose.

Let us go back to October 2012. Somewhere in North Waziristan, eight-year-old Nabeela Rahman and her siblings, along with their grandmother Momina Bibi, were preparing for the festival of Eid.

Apparently, a Predator Drone, possibly the best symbol of American freedom nowadays, decided that Nabeela and her family were potential threats, and released its entire payload on the defenseless civilians. In the blink of an eye, Nabeela’s world was ruined beyond repair: seven children were injured, and Momina Bibi was killed on the spot.

Back to the present day. Nabeela, along with her father and twelve-year-old brother, recently travelled to Washington DC. The objective? She sought answers.

Here is what Nabeela’s father had to say: “My daughter does not have the face of a terrorist and neither did my mother. It just doesn’t make sense to me, why this happened… as a teacher, I wanted to educate Americans and let them know my children have been injured.”

“Unlike Malala, Nabeela was not the poster-girl for warmongers’ propaganda.” [Tweet this!]

Five out of 430 Congressional representatives showed up to listen to Nabeela and her plight. One would expect a better audience, but well, it so happened that (unlike Malala) Nabeela was not the poster-girl for warmongers’ propaganda.

Western media did cover Nabeela’s visit, though, and even pointed out the fact that the translator broke down in tears while recounting their story. However, as expected, the American government thought it wiser to overlook and remain as mute as possible. Just in case it matters, President Obama was entertaining the CEO of Lockheed Martin (a weapons manufacturer) at exactly the same time when Mr. Rahman and his children were narrating the injustice meted out to them all thanks to a botched execution of an American weapon.

Malala Yousafzai was nearly assassinated by the Taliban. As such, Western media groups and pro-war political outfits decided to pitch her as a girl who stood up in favor of their cause. However, instead of actually applauding the girl for her heroism, advocates and proponents of war viewed Malala Yousafzai as a potential tool of political propaganda. They promoted Malala as a victim—someone who needed to be saved. As a result, by using Malala’s example, warmongers could aptly justify their acts and showcase the Predator Drones as symbols of liberty. Remember that slogan? Drones kill so Malala can live!

This is exactly why the propagandists decided to ignore the truth. Max Fisher, writing for The Washington Post, described the situation as follows: “Western fawning over Malala has become less about her efforts to improve conditions for girls in Pakistan, or certainly about the struggles of millions of girls in Pakistan, and more about our own desire to make ourselves feel warm and fuzzy with a celebrity and an easy message. It’s a way of letting ourselves off the hook, convincing ourselves that it’s simple matter of good guys vs bad guys, that we’re on the right side and that everything is okay.”

And what about Nabeela Rahman? Well, her case shows the other side of the picture: the dismal truth behind extrajudicial killings, torture and drone strikes. But she cannot be given the same sympathy that is showered upon Malala—in a war, one’s own victims need to be ignored, whereas the enemy’s victims need to be highlighted. Therefore, as unfair as it might sound, Nabeela will not be getting a prize, nor will there be an audience when she speaks, and of course, there will be no celebrities eager to share the stage with her. Malala, on the other hand, will continue to be seen as the de facto poster girl, and her story will be told innumerable times, simply to justify NATO’s outings in Asia. As outlandish as it might sound, Rudyard Kipling’s “White Man’s burden” logic can be applied here as well—the only reason the world is going crazy over Malala and not Nabeela is because the former is showcased as a victim, whereas the latter is not.

In any case, whilst the rest of the world was swooning over the words of Ms Yousafzai, I was busy listening to the testimony of a ten-year-old girl, who lost her happiness due to no fault of hers: “When I hear that they are going after people who have done wrong to America, then what have I done wrong to them? What did my grandmother do wrong to them? I didn’t do anything wrong.”