Living with Insanity: Harper, Abbott, and Cameron at the Brisbane G-20

Canada’s Prime Minister, Stephen Harper, is reported by a spokesman to have had the following exchange with Russia’s President Vladimir Putin during the Brisbane G-20 summit: “Well, I guess I’ll shake your hand, but I only have one thing to say to you: you need to get out of Ukraine.” Putin is said to have replied, “Impossible. Since we are not there.” 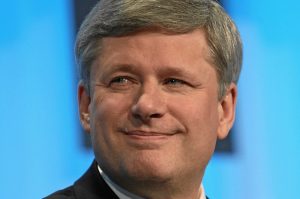 A graceless bit of diplomatic crudity from a truly graceless man, Stephen Harper, someone Canadians know has a history of underhanded practices at home, from introducing ugly personal-attack campaign advertising, using secretive and bullying tactics in parliament, failing to deal with corrupt practices by subordinates especially an American-style election scandal of robo-calls which sent some voters to the wrong polls, to having appointed several unbelievably incompetent and corrupt ministers. He is known for a ferocious temper in private, a very controlling man who grants his political associates absolutely no freedom of expression, and is reported by insiders as having on at least one occasion thrown a chair in a meeting. His silencing of Canadian government scientists from offering their opinions on issues in areas of expertise has been a simmering international scandal, as has his complete suppression of environmental issues.

Before Harper, Canada enjoyed for many decades a reputation for fairness and decency and intelligence in international affairs with statesmanship and openness exhibited by figures like Lester Pearson or Jean Chretien or Paul Martin. Harper has destroyed a great deal of that as he pursues a single-minded role as American junior partner in almost all things.

He completely abandoned Canada’s traditional policies of fairness and balance in the Middle East, literally shocking many Canadians at times with fervent outbursts about Israel, including suggestions that Canadian critics of Israel are anti-Semitic. He does this, as any astute political observer recognizes, to solicit increased campaign funds from Canada’s financially successful Jewish community, taking his cue from Republicans in the United States such as Newt Gingrich, who alone received $18 million dollars from one wealthy supporter of Israel for his last nomination campaign in exchange for inserting into his speeches that there was no such thing as a Palestinian, an utterly insincere and ridiculous statement. Since Israel is no admirer of President Putin’s, he being too independent-minded and opposed to the American exceptionalism Israel tightly embraces and by which it prospers, this activity of Harper’s puts him in an anti-Russian frame of mind from the start.

Harper has made an annual photo-op journey to Canada’s North, always trying to appear to voters as the man most concerned with a future there of melting ice creating free access through the Northwest Passage. Ironically, he periodically mentions Russia as the nation he is most concerned about, but Canada’s recent history couldn’t make it clearer that it is the United States which represents the great threat to our Northern waters and shore. Everything from unauthorized American atomic submarine prowling to a giant American oil tanker passing to published American charts showing this future open water as international tells a pretty harsh story. But in every detail, Harper only pretends America is a great and non-threatening friend.

Harper is the single most obsessed leader in Canada’s history with pleasing, almost fawning over, the United States. Had the history of Canada, which included a great deal of disagreement and contention with the United States over its many imperialistic behaviors, included many leaders of Harper’s character, there quite likely would not be a county called Canada today.

So here are the demonstrated qualities of the man performing as Canada’s diplomatic ass at the G-20 in Brisbane. He demonstrates a genuinely anal-retentive temperament, is intolerant of differences of opinion, and embraces a willful blindness to the world’s greatest threat to peace, the United States in its self-appointed role as imperial arbiter among nations.

In case you wonder why a man like Harper even holds office in Canada, it is because the effective opposition was split with internal battles and because the last leader they selected in desperation following those battles was a man of no political intelligence or even experience and a totally unattractive personality to the public, Michael Ignatieff, someone who managed to do almost everything wrong. It also reflects a democratic deficit in our parliamentary structure where a party with just over 39% of the vote can be a parliamentary majority. So despite Canadians consistently being about 60% or higher inclined to somewhat progressive parties, Harper has had a free run at pole-axing the country’s traditional international reputation. Every day we come to be seen as a bit more like the deceptive and brutal American colony in the Middle East he embraces so closely.

We unfortunately live in a time utterly lacking statesmen in the West. I don’t know the detailed backgrounds of those other aggressive fools at the G-20, Abbott of Australia and Cameron of Britain, but I know they are both men who have lied exceedingly and been intimately involved with such nasty business as favors for the unsavory Rupert Murdoch empire. I can think of nothing which recommends either of them as statesmen. Indeed, they both, quite literally, kowtow to America.

Putin is head and shoulders above these men in intellect and focus, readiness to communicate clear views to the world, someone demonstrating considerable patience, and, from all evidence, someone notably free of the blowhard ideology which virtually characterizes Harper, Abbott, and Cameron.

Putin’s moves in Ukraine seem to me appropriate for dealing with a deliberately-induced crisis in an important neighboring country, and one with a long history of connections and associations. He has not invaded Ukraine, something which he could easily do were he so inclined. I suspect he has supplied weapons to East Ukraine, but that is something the United States does all the time, including supplying weapons to some of the most brutal groups and governments on earth, as it is right now doing in Syria, with secret night cargo flights out of Turkey to terrorist cutthroats. Just ask yourself what America would do about a comparable situation in Mexico: patience simply would not exist, and Mexico City would be quickly overrun by tanks.

The people of East Ukraine, Russian in background and sympathies, deserve protection as much as they deserve the huge amounts of emergency supplies Russia has supplied in a conflict owing its origin entirely to the covert acts of America. Had the coup-established government of Ukraine originally offered protection of Eastern interests, including language rights they openly tried suppressing, the story might have been different, but they did precisely the opposite, passing unfair laws, making threat after threat, and attacking their own citizens. Who wouldn’t rebel in that environment, including any of the states of the United States? How easily people forget past rebellions in the United States, the greatest of which was the Civil War, still the bloodiest war Americans ever experienced.

It is quite clear that the United States is responsible for destabilizing Ukraine. Its funds have been invested into many unsavory projects, perhaps most disturbing is its paying support to a collection of neo-Nazi groups ranging from extremist parties to violent militia forces, some of the very groups who have committed atrocities such as murdering many hundreds of civilians and some of whom actually march under swastika-like flags. It does seem more than a bit strange that men like Harper, Abbott, and Cameron implicitly support that kind of filthy work while charging Putin with dark acts, dark acts which are stated ambiguously and certainly never proved.

It is also clear that the United States has pressured all authorities involved to delay and obscure the investigation into the destruction of Flight MH17, and the only explanation for that can be America’s preventing, for as long as possible while the new coup-created government of Ukraine consolidates its position, the highly embarrassing finding that Ukraine in fact shot it down. The United States has said over and over it has evidence about the crash, yet it has never produced a scrap of it. Just as it never produced evidence for so many past claims from what actually happened on 9/11 to the assassination of a President.

The great irony of the G-20 summit in Brisbane is that its only substantial agreement concerned doing everything possible to promote growth in a world whose economy is dangerously stagnating, yet it wasted time and energy on America’s fantasy stories about Russia and Ukraine, insulted Russia’s President, and threatened in some cases further growth-suppressing sanctions. Nothing could be more contradictory and unproductive or, frankly, just plain stupid.