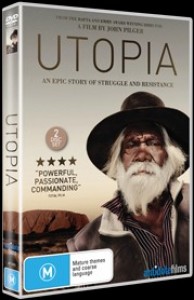 In a clash of cultures, the one carrying the most guns, germs, and steel wins.  In Australia, as with all former British colonial possessions, cultural views are dominated by white society.  The First Nations of Australia, commonly referred to as the aborigines, have struggled through two centuries of subjugation by a white society that refuses to recognize the histories of the two peoples and their conflicting cultures.

As described by native elder Robert Eggington at the end of the film, “In our culture, our laws, if we were to harm the land and to hurt that land the way in which it is being done today, we would be punished spiritually severely for that.  White Australia doesn’t have a sense of belonging to this land and it only has a sense of belonging to the establishment and its institutions and it cities it’s built here.  It doesn’t understand their country.”

Utopia examines the many contradictions and double standards, the many ignorances of the white population, and the many cruelties and violences that they have visited on the land and people of the First Nations of Australia.  It is a captivating and hauntingly disturbing film as these actions are not simply historical incidents to be forgiven by some simplistic apology, but are actions that are occurring through the beginning of the Twenty-first Century without concern for essential human rights.

The capital city, Canberra, was where a “city of white was born,” and the first Prime Minister, Edmund Barton said that “equality of man never intended to apply to those who were not British and white skinned.”  This arrogant, ignorant, and racist viewpoint was common throughout the British empire and still clings strongly to former imperial states, but is arguably strongest in Australia.

Throughout the film, John Pilger examines the lies and platitudes of those in government with the actual historical record and with the narrative of the First Nations people.

As recently as the 1990s, there was an “ideological campaign known as the history wars.”  The historians claimed that there were “no invasions, no massacres, no genocide” and the natives should be grateful for Britain’s arrival, as “they and their culture were all but obsolete, their history worthless. This genocide denial was the propaganda of empire, trying yet again to justify the stealing of a land, and banishment of its people.”

Specific cases are examined, looking at their history, their modern history of the past twenty-five years as witnessed by Pilger, and the ongoing lack of real concern and real action to address the problems.  Comparison are between a lavish resort that charges $30,000 (AUSD) per week on land from which it was “resolved to exterminate the whole race of blacks in that quarter (Sidney Monitor, 1838);”  and a former concentration camp, Rattnest Island, that now serves as a holiday resort with rooms (former cells) renting at $240 a night, where “thousands of aboriginal men and boys incarcerated here,  many of them tortured and killed. Today it a hotel with a luxury spa (Karma Spa).”

Government is only part of the factor of Australia’s racism.  Pilger examines how the media, print and visual, support the generalized racist views within Australia.  Towards the end of the film, he makes a comparison between the “lost generation”—those that were removed from their homes and families in order to deny their culture and lifestyle embedded into the landscape the government and corporations wished to exploit (again a typical factor in other British colonial regimes)—and the much more recent “Interventions” of 2008-09, a government scheme concocted for the same reasons: exploitation of the land and its resources.

The excuse for the interventions was a false claim by a disguised government minister on a TV show about sexual abuse and drugs being rampant within the aboriginal communities.  The government suspended the racial discrimination act and sent in the military, job schemes were eliminated, benefits and pensions were restricted, and a pass card was issued (how so much like South Africa, Canada, Israel and the British supported histories of apartheid).  “With incomes quarantined, starvation was reported and “rates of self-harm and suicide quadrupled.”

The fraud was exposed with no evidence for the charges that led to the intervention.   No one paid any penalty, not the government personnel involved nor the media station (ABC, “Lateline”) that promulgated the misinformation.  The bitter irony of the event is that it created situations similar to the previous “lost generation” wherein children were and still are being removed from families without explanation, many adopted for domestic servants leading to “rape and sexual exploitation used by whites against black women and children.”

Enter the corporations. In 2007 a government program, “Top Secret 2” in 2007 was searching to create “the new frontier in mining.”  After this, and the “interventions” it was found that there was a “huge amount of uranium and rare earths” in the affected area.

While it is mostly a service economy (as per most neo-liberal economies today) mining is a large part of the industrial economy, shipping mostly coal, iron ore, and gold to China (30%) and other Asian countries.  It is “enormously profitable – one billion per week….from minerals they didn’t make from land they don’t own.”

In the 1980s, an attempt was made to legislate national land rights, but a combination of industry, media ads, and scare tactics were “bold, crude, and sadly effective” in defeating it.  Universal land rights were abandoned.  In 2010, PM Gillard attempted to raise the tax rate on the mineral super-profits, but the tax was effectively reduced to nothing, with lost revenue estimated at $60 billion dollars.

Today, the First Nations of Australia are still discriminated against with all the resultant socio-economic problems that go along with the lack of good housing, education, and land and employment.  The Australian government and the majority of its white population hold the typical ignorant and racist British colonial views concerning other races.

Utopia addresses these issues directly, creating a picture of struggle and survival against the oppressive nature of a racist society.   Australia is the “only western country repeatedly condemned for its abuse of indigenous people….reconciliation is not possible without justice.”  The First Nations should be “offered genuine treaty that shares this land….until we give back their nationhood, we can never claim our own.”