Syria: Engaging the Opposition with More than Weapons 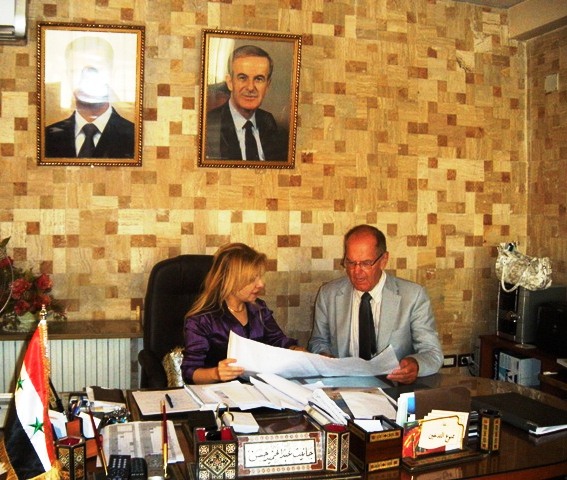 ​Principal Janet Hasan, adapting her school to war conditions to keep her students safe and inspired to learn (Photo courtesy of the author)

Tadmon and Kafr Sousa neighborhoods, DAMASCUS — To my knowledge this observer has never been—nor likely ever will be—accused of being particularly astute and certainly not the least bit prescient.  Yet, the more Syrians I meet in Damascus neighborhoods, seemingly from a fairly broad spectrum of political views, I am changing some earlier assumptions and tentative judgments about “this interminable Syrian war.”  While any sort of a timetable to end this horror is not yet discernible, the beginnings of putting much of it behind this ten millennia birthplace of civilization may be fairly imminent.

Eighteen months ago, more than a dozen neighborhoods in the Damascus suburbs were engaged in moderate to intense fighting between rebels and the Syrian army. Today, only four neighborhoods are under fairly heavy fire: Jobar, Daraya, al-Qabun, and Yarmouk.  In most of the others, the government and rebels appear to be seeking an accommodation of sorts.

Residents from Tadmon, as well as some Damascus University students, offered this observer some examples of how both sides of the civil war are trying to work positively with their sworn enemies despite the conflict approaching its fourth year.

One major quality of life necessity is electricity in our homes. Supplying power to its areas is a major concern of both sides in this conflict. Frankly, even the current Syrian system appears far better than in Lebanon, which regularly sees road blockades and burning of tires to protest the nearly half century of incompetence and indifference of politicians in delivering as few as six hours of daily electricity and that depending on which area and which confession controls relevant cabinet ministries.

In these days of civil war in Syria, the government delivers power two hours on and two hours off and full power during the night from 10 p.m. to 10 a.m.  Not too bad by Levant standards.  Even rebel groups in an increasingly number of neighborhoods, and to a lesser extent in the countryside, get government power. In some rebel neighborhoods electricity is being delivered to residents 24/7.

This is achieved by militia stealing power via cables they run to other neighborhoods.  They quite often seem to get away with it but occasionally they fight among themselves, as happened earlier this month in Al Qudsayya when a dozen or so Nusra fighters routed around 50 FSA (Free Syrian Army) types caught hooking up wires under neighborhood buildings.

Nusra and the FSA fight over a myriad of issues and especially over high-rise buildings.  Tall buildings are at a premium for obvious reasons including being desirable for sniper nests and mortar launchings.  Many neighborhood clashes occur in full view of army checkpoints that control neighborhood egress.

Whether or not the army has orders not to interfere or engage with militias, they reportedly often do.  Militia and army commanders, if not on exactly friendly terms, sometimes meet and parley as deemed necessary in an effort to create and maintain neighborhood peace. This practice appears to work for the benefit of both sides and is reportedly spreading, particularly around Damascus.

When rebel factions fight one another, as they often do and endanger a neighborhood, the army appears increasingly ready to will “mediate.”  If their orders to end the residents endangering fight are not immediately followed the army can and often does cut power to all sides until they receive pledges to honor the governments ‘recommendations.”

Rebel and government “contracts” as the locals call them, cover many subjects, some seemingly odd if not very bizarre.  One example: as news reports suggest the government’s policy is to pacify the neighborhoods so refugees can return, and it has made remarkably progress around Damascus despite an increase in rebel mortar firings into Damascus from approximately 6 per day a year ago to as many as 23 per day currently.

It is reported on good authority from eyewitnesses, that certain army checkpoints  will actually allow armed militiamen to  pass through army checkpoints freely if they will head to Jobar or Duraya or other ‘fighting fields”  to challenge the army there and keep local peace in their local community.  Some do.

Last week, according to a student who lives in al-Qabun, there was a potentially serious problem, but it was solved at one of the periodic meetings between rebel leaders and army officers. The unusual problem was that when a dozen or so rebels headed to the army checkpoint to go fight the same army near Jobar they were observed carrying two AK-47’s each.  The local army commander was livid because by the expressed terms of an earlier agreement each rebel fighter could only safely pass and return through the neighborhood army checkpoint if he was carrying only one AK.  The rebels protested complaining that they need two, always fight with two and it was no big deal for the army to let them pass. The army insisted on only one AK-47 per rebel fighter and threatened to not only stop rebels from exiting and entering their neighborhood but that if they did not keep the earlier agreement the army would attack the rebel positions, presumably with artillery or airstrikes.

This caused panic among the local civilians, many of whom have relatives in the FSA, Nusra, and even Da’ish. Long story made short, the rebels listened to their parents and relatives as well as to the reasoning of the army and finally agreed that they would carry only one AK-47 each thru the army checkpoints on route to fight the army a few kilometers away. According to two eyewitnesses to these events, all sides shook hands at the checkpoint as the rebels handed their second AK-47’s to the army for “safe keeping.”  An unwritten rule between the army and their sworn enemies en route to try to kill them is that if the rebel gets killed the army checkpoint guys gets to keep his weapon.

This is not to say the army and the rebels are in league, but the Syrian government is working to secure the neighborhoods and does not want to resort to bombing if they can obtain their objectives by other means. One hears of many ‘contracts’ being made among sworn enemies around Syria in order to try to end this slaughter.

Another brief example: last week saw the doors of 17,486 of Syria’s  22,192  public schools open their doors. This according to Dr. Farah al-Mutlak, Deputy Minister of Education of Syria, who generously gave this observer his time to discuss the current challenges for children in Syria. The gap of approximately 4,500 schools between the above figures is caused by the fact that 2,613 of Syrian schools, as of opening day were controlled by rebels including Da’ish.  Six-hundred eighty-eight former schools are now being used to house homeless refugees, 1,385 are war damaged and currently can’t be used. The figure was higher but over the past year the government has been able to repair 435.  In addition, approximately 128,000 children are attending “school clubs” in particularly volatile areas of Syria. This year alone, 72,000 children in Syria and 587,000 child refugees have received psychosocial support. 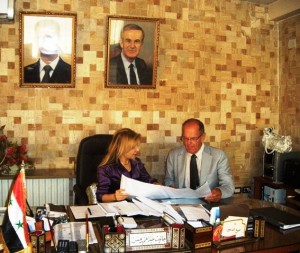 ​Principal Janet Hasan, adapting her school to war conditions to keep her students safe and inspired to learn (Photo courtesy of the author)

Excited and sometimes apprehensive children by the thousands are arriving for the new school year and according to Janet Hasan, Principal of the Salahedine Primary and Middle School in the Mezzeh neighborhood of central Damascus which was among those this observer visited, her school which normally teaches 600 girls now has 1,436. Class size has traditionally been 30 students of average.  Today, the average class size at Salahedine School is 60 students per class.

Yet despite severe overcrowding the classes appear very well organized and when the results of last June’s Baccalaureate were announced 94% of Principal Hassan’s students passed.  According to educator Hasan and some of her faculty this observer met with,  due to the crisis attending school is enormously important for the children to experience at least some love and normalcy with peers and authority figures while learning about more than  only the obvious effects of war on their lives.

If militias are in control  of an area with a public school,  efforts are being made by both parties to keep it peaceful and toward this goal the government and the militia, “cooperate” with the exception of Da’ish (IS) who have set up essentially Madrassas that do not teach anything  much at all-but memorizing the Koran.  Da’ish forbids teaching music, dancing, studying philosophy, western literature or other ‘secular subjects.’   Al Nusra does not, unlike Da’ish, insist on a Madrassa type education in public schools which so far are a big success this new year and working to the benefit of the children and their exhausted and often destitute families. 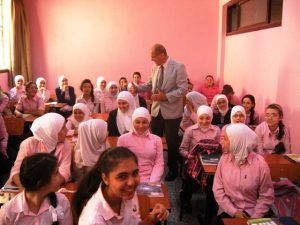 Virtually every educator, government official and critic of the Assad regime with whom this observer has discussed what the Syrian government is doing to provide quality education for youngsters these days  have agreed that all sides, except Da’ish, are trying at different levels to cooperate to help Syria’s cherished youth. All also express abhorrence at what is happening to Syrian school children forced to take refuge in Lebanon. In Lebanon, there’s simply no space in many schools nor much political will left to help Syrian or Palestinian refugees plus the education system is overwhelmed by the sheer numbers of child refugees. Around 80 percent of Syrian refugee children in Lebanon don’t attend school, according to Save the Children and UNHCR.

One positive sign is that partly due to the Syrian Ministry of Education seeking international help, more than $316m was pledged this week, according to Dr. al-Mutlak, to support Syrian children affected by the conflict.  This assistance is part of a UN-led initiative to alleviate the impact of the crisis on young people. Despite this wonderful and much needed help a funding gap of more than $200 million remains.

Another issue that both sides are trying to resolve at citizens request is to open the neighborhoods on the weekends so residents can move around.  Currently in as many as a dozen Damascene neighborhoods the rebels prevent residents from leaving their area on Friday because they believe they should pray and stay at home.  Some militias close the neighborhoods they control during both Friday and Saturday. Both sides have indicated that a mutually agreed resolution may be near so residents can head to the beautiful parks and old city for sightseeing or visit friends and family.

There is growing evidence here that the government and the rebels are trying to collaborate in various ways in order to save and entire generation of their children from being denied education due to the ravages of ongoing civil war. This massive catastrophe for Syria and the region can be ended if the above noted trend continues.