Goon Thugs and Gullible Conservatives: Where Are the Class Action Suits?

Reports such as this one are routine occurrences that happen many times each day.  Gratuitous police violence in America is totally out of control.  Every day police murder 1.4 Americans, and beat, taser, body slam, and break into the homes of many others.  Ferguson made it into the news, but Americans suffer police violence every day. 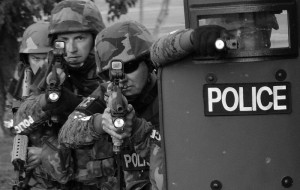 In response to the killing of Michael Brown in Ferguson, apologists for police brutality concocted every possible excuse imaginable in order to justify Brown’s killing.  Yet, we know for a fact that unprovoked police violence is routine and apparently unavoidable.  The willingness of “law and order conservatives” to give the police the benefit of the doubt in the face of all evidence to the contrary is inexcusable.

In the story reported in the above link,  a 68-year old woman and her adopted daughter were attacked in their home by a goon thug SWAT team that destroyed their unlocked front door, threw stun grenades into the home blowing out the windows, ordered the women to the floor with rifles pointed at their heads, handcuffed them and paraded them out of the house in front of neighbors.

What was it all about?  More stupid incompetence and outrageous behavior by our goon thugs.

The women’s wireless internet signal was not protected by a password, and a neighbor used it to post a silly message that read as a threat to the Evansville police.  The police followed the IP address to the women’s home and terrorized them.

The violence inflicted on the women and their home was totally unnecessary and totally unjustified.  Luckily, the women did not have a pet dog or it would have been shot by the goon thugs.  The trauma gratuitously inflicted on the two women is experienced by Americans many times each day.  Our taxes are used not to protect us but to traumatize us and to inflict property damage on us.  The Federal Reserve reports that 52% of American households cannot raise $400 in cash, which is about the cost of replacing a shattered door and door frame.

Other than the endless wars cooked up in Washington by the neoconservative warmongers, the police are the greatest threat that Americans face.  The police do not protect anyone.  They get their jollies murdering, beating, and tasering American citizens.  We would be much safer without the police.

The SWAT team assault on the women’s home demonstrates that police lack sufficient judgment and humanity to be trusted with weapons and authority of any kind.  The police behave in brutally mindless ways for which no justification exists.  Moreover, they seldom tell the truth about their brutal encounters with the public.  Nevertheless, the “law and order” conservatives can always be counted on to believe whatever tale the goon thugs tell and, indeed, to add to the exculpatory tale themselves.

It has long been known that power attracts bullies and psychopaths and that the less accountable power is the more unrestrained its use will be.  Given this fact, it is impossible to comprehend the stupidity of government that gave the go ahead to the militarization of the police.  The police are taught that their lives are so important—exceptional lives—that no risk whatsoever must be taken with them, even when confronting elderly women and children.

The consequence of this training is to elevate the role of violence in police encounters. The police are trained to ensure that the citizen bears all the risks of a police confrontation even in instances in which citizens are incapable of harming the police.

In my opinion, it was a felony to train police to abuse their authority and the public.  We need to find out who is responsible and to bring class action suits seeking restitution against the criminals who trained the police to become a deadly threat to the public.