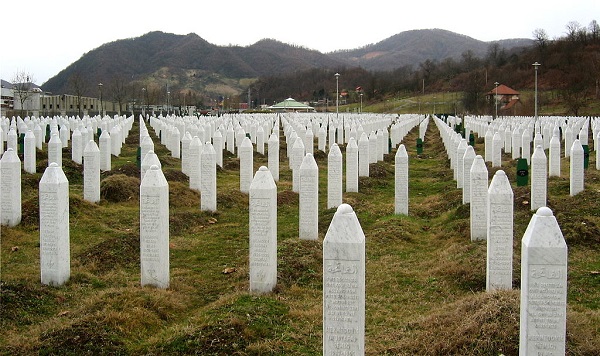 Every year in July, the memories of the Srebrenica Massacre swell anew and bring tears to not just Bosniaks but anyone who has even an ounce of humanity left in him/her. Years go by, debates keep happening, and we keep telling ourselves that humanity is not yet dead.

Yes, Srebrenica was a protected UN Safe Area. There was a Dutch peacekeeping force stationed in the region and their job was to protect the refugees in and around Srebrenica. Needless to say, the peacekeepers failed.

This massacre, unarguably the worst one ever witnessed by Europe after the Second World War, was carried out by the Serbian terror forces under the command of General Ratko Mladic. The victims were shot and dumped in mass graves, thereby making identification very difficult. Thus far, the International Commission on Missing Persons (ICMP) has identified nearly 6500 victims of the Srebrenica Massacre.

Certain videos have surfaced, which show the atrocities committed by Mladic’s men. Here is one such video (be warned: contains very graphic scenes of violence):

The Dutch peacekeeping forces too failed to impress. To quote General John Sheehan, the then NATO’s Supreme Commander:

“The case in point that I’m referring to is when the Dutch were required to defend Srebrenica against the Serbs. The battalion was under-strength, poorly led, and the Serbs came into town, handcuffed the soldiers to the telephone poles, marched the Muslims off, and executed them. That was the largest massacre in Europe since World War Two.”

The Appeals Chamber states unequivocally that the law condemns, in appropriate terms, the deep and lasting injury inflicted, and calls the massacre at Srebrenica by its proper name: genocide. Those responsible will bear this stigma, and it will serve as a warning to those who may in future contemplate the commission of such a heinous act.”

The Ghost of Genocide

However, the hatred is still alive. During the course of the trial, Colonel Luka Dragicevic stated in his testimony that he had no remorse for the 1995 events, and he felt that “Serbians are genetically stronger, better, more beautiful and smarter” as compared to Bosnians.

Such blatant racism is just the tip of the iceberg. Karadzic’s daughter, Sonja Karadzic-Jovicevic, recently announced that she will run in the upcoming parliamentary elections of Republika Srpska in October this year. She openly denies allegations of genocide, questions the authority of The International Court in The Hague, and puts forth a sectarian ideology. It is also noteworthy that Radovan Karadzic is being viewed as a war hero (not a war criminal).

Furthermore, the Republika Srpska has granted over $1m from its government budget to an NGO (owned and operated by a Serbian lawyer named Stephen Karganovic) that intends to present a one-sided and false account of the Srebrenica Massacre.

Quite obviously, denial and perversion of history is an acceptable task for the Republika Srpska.

1995 is long gone, but the scars of the tragedy are still fresh. Serbian government aspires to join the EU. However, it needs to realize that its agenda of “intended indifference” towards crimes of yesterday is not the right road to be on.

People in Republika Srpska need to realize that their current leaders — be it the previous President Radovan Karadzic, his daughter Sonja Karadzic-Jovicevic, or the current President Milorad Dodik — need to ousted at the earliest. Nationalism is acceptable, but ultranationalism serves no fruitful purpose.

On the other hand, the Bosniaks too need to develop a conscious willingness to work together. Having suffered the ill-effects of war and witnessed a full-fledged genocide, most Bosniaks are undergoing a sort of existential crisis. Absence of violence does not mean absence of fear, after all. As such, the Bosniaks need to realize that their struggle for justice is far from over. They need to find the strength to aspire for a glorious future.

The horrid flashbacks of 1995 can fade only when there is hope for regional cooperation and harmony. Until then, even if The Hague Court were to pronounce its verdict and punish the culprits, the sad episodes of Srebrenica will linger on in memory.