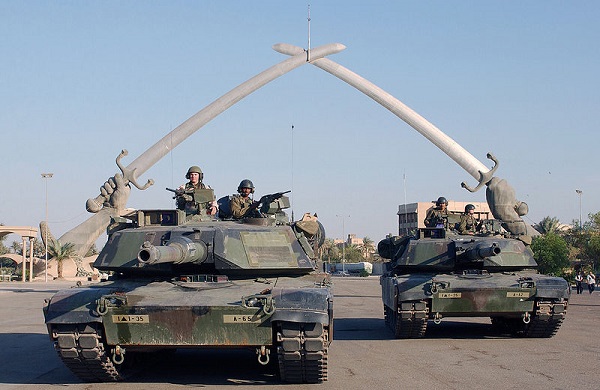 US Army M1A1 tanks at the "Hands of Victory" in Ceremony Square in Baghdad, Iraq

George Herbert Walker Bush, a former Director of the Central Intelligence Agency who became President courtesy of being picked as Ronald Reagan’s Vice President, was the last restrained US President.  When Bush the First attacked Iraq it was a limited operation, the goal of which was to evict Saddam Hussein from his annexation of Kuwait.

Kuwait was once a part of Iraq, but a Western colonial power created new political boundaries, as the Soviet Communist Party did in Ukraine.  Kuwait emerged from Iraq as a small, independent oil kingdom.

According to reports, Kuwait was drilling at an angle across the Iraq/Kuwait border into Iraqi oil fields.  On July 25, 1990, Saddam Hussein, with Iraqi troops massed on the border with Kuwait, asked President George H. W. Bush’s ambassador, April Glaspie, if the Bush administration had an opinion on the situation.  Here is Ambassador Glaspie’s reply:

“We have no opinion on your Arab-Arab conflicts, such as your dispute with Kuwait. Secretary [of State James] Baker has directed me to emphasize the instruction, first given to Iraq in the 1960’s that the Kuwait issue is not associated with America.”

According to this transcript, Saddam Hussein is further assured by high US government officials that Washington does not stand in his way in reunifying Iraq and putting a halt to a gangster family’s theft of Iraqi oil:

“At a Washington press conference called the next day, State Department spokesperson Margaret Tutweiler was asked by journalists:

“to which she responded: ‘I’m entirely unaware of any such protest.’

“On July 31st, two days before the Iraqi invasion [of Kuwait], John Kelly, Assistant Secretary of State for Near Eastern affairs, testifiedto Congress that the ‘United States has no commitment to defend Kuwait and the U.S. has no intention of defending Kuwait if it is attacked by Iraq’.”

Was this an intentional a set-up of Saddam Hussein, or did the Iraqi takeover of Kuwait produce frantic calls from the Bush family’s Middle Eastern business associates?

Whatever explains the dramatic, sudden, total change of position of the US government, the result produced military action that fell short of war on Iraq itself.

Suddenly, in 2003 Iraq was no longer acceptable. We don’t know why. We were told a passel of lies:  Saddam Hussein had weapons of mass destruction that were a threat to America. The specter of a “mushroom cloud over an American city” was raised by the National Security Advisor. The Secretary of State was sent to the UN with a collection of lies with which to build acceptance of US naked aggression against Iraq. The icing on the cake was the claim that Saddam Hussein’s secular government “had al Qaeda connections,” al Qaeda bearing the blame for 9/11.

As neither Congress nor the US media have any interest to know the reason for Washington’s about face on Iraq, the “Iraq Threat” will remain a mystery for Americans.

But the consequences of Washington’s destruction of the secular government of Saddam Hussein, a government that managed to hold Iraq together without the American-induced violence that has made the country a permanent war zone, has been ongoing years of violence on a level equal to, or in excess of, the violence associated with the US occupation of Iraq.

Washington is devoid of humanitarian concerns. Hegemony is Washington’s only concern. As in Afghanistan, Libya, Somalia, Pakistan, Yemen, Ukraine, Syria, and Iraq, Washington brings only death, and death is ongoing in Iraq.

Does anyone remember the propaganda that Washington had to overthrow Saddam Hussein in order to bring “freedom and democracy and women’s rights to Iraqis”? We had to defeat al Qaeda, which at the time was not present in Iraq, “over there before they came over here.”

Do you remember the neoconservative promises of a “cakewalk war” lasting only a few weeks, of the war only costing $70 billion to be paid out of Iraqi oil revenues, of George W. Bush’s economic advisor being fired for saying that the war would cost $200 billion? The true cost of the war was calculated by economist Joseph Stiglitz and Harvard University budget expert Linda Bilmes who showed that the Iraqi war cost US taxpayers $3 trillion dollars, an expenditure that threatens the US social safety net.

Do you remember Washington’s promises that Iraq would be put on its feet by America as a democracy in which everyone would be safe and women would have rights?

What is the situation today?

Mosul, the second largest city in Iraq, has just been overrun by al Qaeda forces.  These are the forces that Washington has claimed a number of times to have completely defeated.

These “defeated” forces now control Iraq’s second largest city and a number of provinces. The person Washington left in charge of Iraq is on his knees begging Washington for military help and air support against the Jihadist forces that the incompetent Bush regime unleashed in the Muslim world.

What Washington has done in Iraq and Libya, and is trying to do in Syria, is to destroy governments that kept Jihadists under control.  Washington faces the prospect of a Jihadist government encompassing Iraq and Syria. The Neoconservative conquest of the Middle East is becoming an al Qaeda conquest.

Washington has opened Pandora’s Box.  This is Washington’s accomplishment in the Middle East.

Even as Iraq falls to al Qaeda, Washington is supplying the al Qaeda forces attacking Syria with heavy weapons.  It is demonized Iran that has sent troops to defend the Washington-installed regime in Baghdad!  Is it possible for a country to look more foolish than Washington looks?

One conclusion that we can reach is that the arrogance and hubris that defines the US government has rendered Washington incapable of making a rational, logical decision.  Megalomania rules in Washington.