Who Is More Exceptional: The United States or Russia? 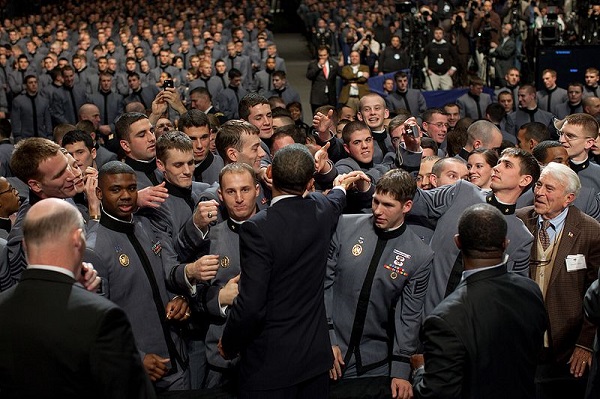 President Barack Obama greets cadets after delivering a speech on Afghanistan at the U.S. Military Academy at West Point in West Point, N.Y., Dec. 1, 2009. More recently, he spoke at the commencement ceremony on May 28, 2014. (Pete Souza/White House)

I was going to write a commentary about President Obama’s speech to the graduating class at the US Military Academy (West Point) on May 28. When he speaks to a military audience the president is usually at his most nationalistic, jingoist, militaristic, and American-exceptionalist – wall-to-wall platitudes. But this talk was simply too nationalistic, jingoist, militaristic, and American-exceptionalist. (“I believe in American exceptionalism with every fiber of my being.”) To go through it line by line in order to make my usual wise-ass remarks, would have been just too painful. However, if you’re in a masochistic mood and wish to read his speech, it can be found here.

Instead I offer you part of a commentary from Mr. Jan Oberg, Danish director of the Transnational Foundation for Peace and Future Research in Lund, Sweden:

What is conspicuously lacking in the President’s West Point speech?

Ironically, on May 30 the Wall Street Journal published a long essay by Leon Aron, a Russia scholar at the conservative American Enterprise Institute in Washington. The essay took Russian president Vladimir Putin to task for claiming that Russia is exceptional. The piece was headed:

“Why Putin Says Russia Is Exceptional”

“Such claims have often heralded aggression abroad and harsh crackdowns at home.”

It states: “To Mr. Putin, in short, Russia was exceptional because it was emphatically not like the modern West – or not, in any event, like his caricature of a corrupt, morally benighted Europe and U.S. This was a bad omen, presaging the foreign policy gambits against Ukraine that now have the whole world guessing about Mr. Putin’s intentions.”

So the Wall Street Journal has no difficulty in ascertaining that a particular world leader sees his country as “exceptional”. And that such a perception can lead that leader or his country to engage in aggression abroad and crackdowns at home. The particular world leader so harshly judged in this manner by the Wall Street Journal is named Vladimir Putin, not Barack Obama. There’s a word for this kind of analysis – It’s called hypocrisy.

“Hypocrisy is anything whatever may deceive the cleverest and most penetrating man, but the least wide-awake of children recognizes it, and is revolted by it, however ingeniously it may be disguised.” – Leo Nikolaevich Tolstoi, (1828-1910) Russian writer

Is hypocrisy a moral failing or a failing of the intellect?

The New Cold War is getting to look more and more like the old one, wherein neither side allows the other to get away with any propaganda point. Just compare any American television network to the Russian station broadcast in the United States – RT (formerly Russia Today). The contrast in coverage of the same news events is remarkable, and the stations attack and make fun of each other by name.

Another, even more important, feature to note is that in Cold War I the United States usually had to consider what the Soviet reaction would be to a planned American intervention in the Third World. This often served as a brake to one extent or another on Washington’s imperial adventures. Thus it was that only weeks after the Berlin Wall came down in 1989, the United States bombed and invaded Panama, inflicting thousands of casualties and widespread destruction, for the flimsiest – bordering on the non-existent – of reasons.  The hostile Russian reaction to Washington’s clear involvement in the overthrow of the Ukrainian government in February of this year, followed by Washington’s significant irritation and defensiveness toward the Russian reaction, indicates that this Cold War brake may have a chance of returning. And for this we should be grateful.

After the “communist threat” had disappeared and the foreign policy of the United States continued absolutely unchanged, it meant that the Cold War revisionists had been vindicated – the conflict had not been about containing an evil called “communism”; it had been about American expansion, imperialism, and capitalism. If the collapse of the Soviet Union did not result in any reduction in the American military budget, but rather was followed by large increases, it meant that the Cold War – from Washington’s perspective – had not been motivated by a fear of the Russians, but purely by ideology.