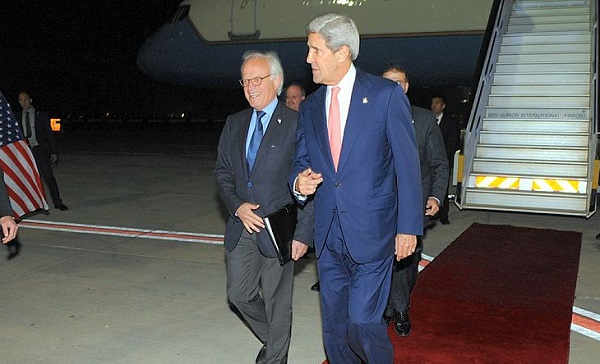 To understand how thoughtless the US latest ‘peace process’ drive has been, one only needs to consider some of the characters involved in this political theater. One particular character who stands out as a testament to the inherently futile exercise is Martin Indyk.

Indyk, a former US ambassador to Israel, was selected by Secretary of State John Kerry for the role of Special Envoy for negotiations between Israel and the Palestinian Authority. Under normal circumstances, Kerry’s selection may appear somewhat rational. Former ambassadors oftentimes possess the needed expertise to navigate challenging political landscapes in countries where they previously served. But these are not normal circumstances, and Indyk is hardly a diplomat in the strict use of the term.

As the US-sponsored peace process began to falter, Kerry made a peculiar move by dispatching his envoy Indyk to Jerusalem. On Friday, April 18, Indyk took on the task of speaking to both sides separately. International media depicted the event as a last ditch effort to revive the talks, and to help bridge the gap between the PA’s Mahmoud Abbas and Israel’s Benjamin Netanyahu. The envoy visit took place a day after intense and difficult talks were reported to have taken place between Israeli and PA negotiators. “No breakthrough was made,” an official Palestinian source told AFP of the Thursday meeting.

It was not that any progress was expected. Both sides are not talking about resolving the conflict per se, but the deliberations were mostly concerned with deferring Kerry’s deadline for a ‘framework agreement’, slated for April 29.

The Americans want to maintain the charade for reasons other than peace. Without a ‘peace process’ the US will be denied an important political platform in the Middle East. US administrations have bestowed upon themselves the title ‘honest broker’. Of course, it takes no particular genius to realize that the Americans were hardly honest in their dealings with both parties. In fact, the US was not a third party at all, but was and remains steadfast in the Israeli camp. It used its political and financial leverage as a platform that allowed it to advance Israeli interests first, and their own interests second. Indyk is an example.

Martin Indyk, the prospective harbinger of peace, worked for the pro-Israeli lobby group AIPAC in 1982. AIPAC is a rightwing outlet that has invested unlimited funds and energy to impede any just and peaceful resolution to the conflict. It has such a strong grip over US Congress to the extent that some have suggested that Capitol Hill has become, in a sense, an occupied territory by Israel and its allies. Indyk’s most important contribution to Israel, however, was the founding of the Washington Institute for Near East Policy (WINEP) in 1985, another Israeli lobby outlet that has done tremendous damage to the credibility of US foreign policy in the Middle East by using ‘intellectuals’ and ‘experts’ as mediums.

Writing in Mondoweiss last year, Max Blumenthal recalled some interesting statements made by Indyk at J Street’s first annual convention in Washington DC in 2009. J Street is another Israeli lobby group that has cleverly distinguished itself as pro-peace, thus deceiving many into believing that AIPAC’s dominance in Washington is being seriously challenged. However, its cleverly worded statements, and the colorful past of its honored guests and speakers indicate otherwise. Indyk, the rightwing Israel lobbyist, was indeed among friends.

“I remembered stumbling into a huge auditorium to hear Indyk describe how he made ‘aliyah to Washington’ during the 1980’s to ensure that US policy remained slanted in Israel’s favor, and go on to blame Yasser Arafat for the failure of Camp David,” Blumenthal recalled.

He quoted Indyk. “I came to that conclusion 35 years ago when I was a student in Jerusalem and the Yom Kippur war broke out,” said Indyk. “I worked as a volunteer there in those terrible days when Israel’s survival seemed to hang in the balance and I witnessed the misery of war and the critical role that the United States in the form of Henry Kissinger played through activist diplomacy in forging a peace out of that horrendous war.”

These were not passing comments made by Indyk, but a reflection of the man’s undying commitment, not to peace, but to Israel, or, more accurately, to ‘peace’ as envisioned by Israel, which is the core of the ongoing crisis. Israeli Prime Minister Netanyahu never ceases to talk about peace, as does his Foreign Minister Avigdor Lieberman. Even the Minister of Economy, Naftali Bennett, leader of the extremist party, The Jewish Home, who is known for his bellicose rhetoric, is an ardent advocate of peace. But it is not peace that is predicated on justice or that envisaged by international and humanitarian laws. It is specifically-tailored peace that would allow Israel to maintain an unmistakably racist agenda, and a colonial policy of land grabbing.

Unsurprisingly, this is the same kind of ‘peace’ that the Americans envision as well. Kerry’s new peace agenda is not entirely a rehash of old agendas. Yes, it is that too, but it almost completely embraces the once far-fetched ideas of Lieberman and rightwing groups, that of annexations – the Jordan Valley – and ‘land swaps’ in exchange of main settlement blocs. When Lieberman floated these ideas a few years ago, he sounded like a deranged politician. Thanks to Kerry, it is now part of mainstream thinking.

So Indyk, who dedicated a lifetime to securing an Israeli style ‘peace’, is now magically branded as the one attempting to revive talks and exert pressure on both sides like any good ‘honest broker’ would do in these situations. But Indyk is not the only lobbyist-turned advocate for ‘peace.’ He is one of many. Dennis Ross, one of Washington’s essential political hawks for many years and a strong supporter of the disastrous Iraq war, served as a special Middle East coordinator under Bill Clinton, and was handpicked by President Barack Obama very early on to continue to the play the same role in the new administration. Aside from the diplomat’s strong links to neoconservatives, especially those involved in the now defunct pro-war group, the Project for the New American Century; he also served as a consultant to the same lobby club founded by Indyk, WINEP.

It was no coincident of course. WINEP, as other hawkish pro-Israeli groups, has served as an advocacy platform for Israel, and also fashioned Israeli styled ‘peace makers.’ Interestingly, both Dennis and Indyk blamed Palestinians for the failure of previous peace talks. Blumenthal astutely highlighted Indyk’s J Street tirade blaming late PLO leader Arafat with “that big shit-eating grin of his” for the failings of the so-called Clinton peace parameters, despite the fact that Arafat had indeed accepted them.

Indyk reminisced: “I remember Shimon Peres saying to me at the time when Arafat had to decide whether to accept the Clinton Parameters, he said, history is a horse that gallops past your window and the true act of a statesman is to jump from the window on to a galloping horse. But of course Arafat let the galloping horse pass by leaving the Israelis and Palestinians mired in misery.”

Now, it’s Indyk, the die-hard Israel lobbyist, being sent along with another galloping horse outside Abbas’ window. We all know well how this is going to end, and we can imagine Indyk giving another speech at an AIPAC or J Street conference deriding Abbas for failing to jump.