Omar and the Checkpoint: The Essential Story that is Rarely Told 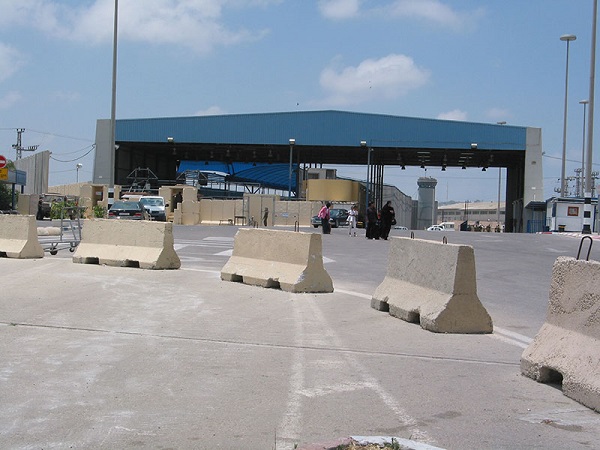 Erez Crossing at the northern end of the Gaza Strip. (Zero0000/Wikimedia Commons)

Omar is a 7-year-old boy from Gaza. His family managed to obtain the necessary permits that allowed him to cross the Erez checkpoint to Jerusalem, through the West Bank, in order to undergo surgery. He was accompanied by his father. On the way back, the boy and his father were stopped at the Qalanidya checkpoint, separating occupied East Jerusalem from the West Bank. The father needed another permit from the Israeli military to take his son, whose wounds were still fresh hours after the surgery, back to the strip. But the soldiers were in no obliging mood.

This story was reported in its painful details by an Israeli rights activist Tamar Fleishman, of Machsomwatch (checkpoint watch). Her name is synonymous with the Qalanidya checkpoint, because she has been hovering there for countless hours, reporting on the Israeli military’s infuriating torment of Palestinian travelers. Her report, although painful to read, shed a light on a side of the Israeli occupation that oftentimes goes unnoticed. Many speak of Israel’s checkpoints dotting the occupied territories, but few truly appreciate the real experience of living life imprisoned between checkpoints, by being held hostage to the temperament of unruly soldiers.

Omar’s “body was still full of anesthetics (as he) collapsed on the metal bench at the shed in front of the DCL offices at Qalandiya checkpoint,” Fleishman wrote in the Palestine Chronicle. “It was very cold as the day turned into evening. Omar’s father took his leather coat off and wrapped it over his son. Omar didn’t open his eyes. Neither the healthy eye nor the one that was swollen from the surgery.  He kept sleeping. He seemed to be in a state between sleep and loss of consciousness.”

Omar’s heartrending photo, also taken by Fleishman, is of him lying awkwardly at the metal bench, covered by a black leather coat. The boy was likely unaware of much of the reality that encircled him. He might have heard his father pleading his case to the soldiers; or felt the gentle caressing of his hair by a Palestinian mother, also held at the checkpoint; he might’ve even sensed the cold air penetrating his skin to his frail bones. Or he might’ve felt nothing at all. But still, Omar, is every sick Palestinian and his story symbolizes the very depravity at the heart of the Israeli occupation.

Omar is not a poster child for victimhood. His pain and that of his dad should not merely invoke sights of petty, or philosophical diatribes of how the occupation is killing Israel’s soul, or reignite yet more arguments of what ‘solution’ to the ‘conflict’  we like most. Neither the action of the soldiers, that of their military and political superiors, or of those who have armed and financed them (mainly the United States and European countries) are in the least influenced by fervently debated political and academic discourses. They simply have the means and power to maintain such a colossal matrix of control that turns the lives of ordinary Palestinians into a never-ending nightmare, and they have no reason to stop.

And why should they? Israel’s military occupation is a hugely successful business venture. Jewish settlers are rarely aware of how their presence in occupied land constitutes a violation of international law and the Fourth Geneva Convention. It’s a war crime.  But do they know that? And if they do, should they care? They live in government subsidized housing, connected through a very costly road system—preserved for ‘Jews only’ back to Israel—enjoy numerous perks, ones that even those living in Israel cannot access. Settlers siphon Palestinian water from West Bank aquifers, while Palestinians barely get by with a small share of their own water resources. Settler children receive excellent healthcare, the best schooling, and their parents cruise around with nice cars as they enjoy the finer things in life. Most Palestinians subsist at a low-income and live life negotiating access through checkpoints, from the day they are born, until the day they die, and every day in between.

Israeli leaders thrive at the political support they receive from settlers, and cringe at the very thought of losing favor with the most messianic and ultra-nationalist and rightwing among them. The Israeli army is deployed throughout the West Bank—aside from ensuring that the Palestinian population is thoroughly subdued—to safeguard settlers and settlements. The checkpoints, like those of Qalandiya, are there to serve that purpose. As in many checkpoints in and around the West Bank, the fast lane is reserved for Jewish settlers, who are ushered in with ease. While Palestinians have to squeeze between concrete walls, giant cement blocks or fences as they wait to plead their case to the soldiers.

Some of the checkpoint’s waiting areas look like massive cages. Ma’an news agency reported on January 6 that a man was crushed to death at the Ephraim/Taybeh checkpoint near the West Bank city of Tulkarem. 59-year-old Adel Muhammad Yakoub from the village of Balaa “died as a result of extreme overcrowding,” it reported.  “Some 10,000 Palestinian workers cross through the checkpoint every day and that inspection procedures at the checkpoint go very slowly causing dangerous levels of overcrowding inside the checkpoint.”

Yakoub left behind a wife and seven children. Now, 9,999 workers continue to cross through the Taybeh checkpoint. Even if the Israeli army increased the number of soldiers that process the permits for Palestinian workers, or enlarged the cage-like fences a few feet to the right or left, the fundamental question remains: what will compel Israel to end its occupation, tear down its walls, fences, and bring this horrific and protracted episode to an end?

How long will it be before Palestinian workers push back the fences and soldiers who take part in the collective and daily torment of hundreds of thousands of Palestinians?

As for the rest of us, will we continue to espouse this banal debate: one side that justifies Israel’s action, at times in the name of God and his ‘Chosen People’ and at others in the name of ‘security; and another side that is stuck promoting Palestinian victimization as if an end in itself, without much understanding of the true political underpinnings, or the sheer desire to carry out tangible acts of solidarity for the likes of Omar and his dad?

Omar was finally woken up by his distressed father, who managed to produce the boy’s original birth certificate (a copy, said, Fleishman, is unacceptable); and both, after a long wait, were allowed to go home to Gaza before Erez was scheduled to close. But still, another Omar must be waiting at some checkpoint, somewhere, with his original birth certificate in hand, accompanied by a distressed relative, beseeching the sense of morality of an unfeeling soldier, who has none.