Democracy Murdered By Protest: Ukraine Falls To Intrigue and Violence 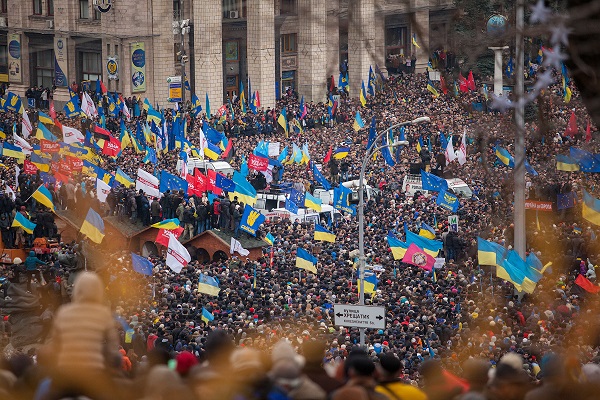 Who’s in charge?  Certainly not the bought-and-paid-for-moderates that Washington and the EU hoped to install as the new government of Ukraine. The agreement that the Washington and EU supported opposition concluded with President Yanukovich to end the crisis did not last an hour.  Even the former boxing champion, Vitaly Klitschko, who was riding high as an opposition leader until a few hours ago has been booed by the rioters and shoved aside. The newly appointed president by what is perhaps an irrelevant parliament, Oleksandr Turchynov, has no support base among those who overthrew the government. As the BBC reports, “like all of the mainstream opposition politicians, Mr. Turchynov is not entirely trusted or respected by the protesters in Kiev’s Independence Square.”

In western Ukraine the only organized and armed force is the ultra-nationalist Right Sector. From the way this group’s leaders speak, they assume that they are in charge.

One of the group’s leaders, Aleksandr Muzychko, has pledged to fight against “Jews and Russians until I die.”  Asserting the Right Sector’s authority over the situation, Muzychko declared that now that the democratically elected government has been overthrown, “there will be order and discipline” or “Right Sector squads will shoot the bastards on the spot.”

The bastards are any protesters who dare to protest the Right Sector’s control.

Muzychko declared, “The next president of Ukraine will be from Right Sector.”

Another Right Sector leader, Dmitry Yarosh, declared: “the Right Sector will not lay down its arms.”  He declared the deal made between the opposition and the President to be “unacceptable” and demanded the liquidation of President Yanukovich’s political party.

The Right Sector’s roots go back to the Ukrainians who fought for Adolf Hitler against the Soviet Union during World War II. It was the Right Sector that introduced armed fighters and turned the tide of the protests in Kiev from peaceful protests in favor of joining the EU to violent attacks on police with the view of overthrowing the democratically elected government, which the Right Sector succeeded in doing.

The Right Sector did not overthrow the Ukraine government in order to deliver it into the hands of the Washington and EU paid “opposition.”

There is a tendency to discount the Right Sector as a small fringe group, but the Right Sector not only took control of the protests away from the Western supported moderates, as moderate leaders themselves admitted, but also the Right Sector has enough public support to destroy the national monument to the Red Army soldiers who died liberating Ukraine from Nazi Germany.

Unlike the US orchestrated toppling of the stature of Saddam Hussein, which was a PR event for the presstitutes in which Iraqis themselves were not involved, Ukrainian rightists’ destruction of the monument commemorating the Red Army’s liberation of the Ukraine had public support. If the Right Sector hates Russians for defeating the Nazis, the Right Sector also hates the US, France, and England for the same reason. The Right Sector is an unlikely political party to take Ukraine into the EU.

The Russian parts of Ukraine clearly understand that the Right Sector’s destruction of the monument commemorating the stand of the Red Army against the German troops is a threat against the Russian population of Ukraine. Provincial governments in eastern and southern Ukraine that formerly were part of Russia are organizing militias against the ultra-nationalist threat unleashed by Washington’s stupidity and incompetence and by the naive and gullible Kiev protesters.

Having interfered in Ukraine’s internal affairs and lost control, Washington is now issuing ultimatums to Russia not to interfere in Ukraine. Does the idiot Susan Rice, Obama’s neoconservative National Security Advisor, think Putin is going to pay any attention to her ultimatums or to any instruction from a government so militarily incompetent that it was unable to successfully occupy Baghdad after 8 years or to defeat a few thousand lightly armed Taliban after 12 years?  In only took a few hours for Russian troops to destroy the American and Israeli trained and armed Georgian army that Washington sent to invade South Ossetia.

Where does Obama find morons like Susan Rice and Victoria Nuland? These two belong in a kindergarten for mentally handicapped children, not in the government of a superpower where their ignorance and arrogance can start World War 3.

Ukraine is far more important to Russia than it is to the US or EU. If the situation in Ukraine spirals out of control and right-wing extremists seize control, Russian intervention is certain. The arrogant and stupid Obama regime has carelessly and recklessly created a direct strategic threat to the existence of Russia.

According to the Moscow Times, this is what a senior Russian official has to say: “If Ukraine breaks apart, it will trigger a war.”  Ukraine “will lose Crimera first,” because Russia “will go in just as we did in Georgia.”  Another Russian official said: “We will not allow Europe and the US to take Ukraine from us. The states of the former Soviet Union, we are one family. They think Russia is still as weak as in the early 1990s but we are not.”

The Ukrainian right-wing is in a stronger position than Washington’s paid Ukrainian puppets, essentially weak and irrelevant persons who sold out their country for Washington’s money. The Right Sector is organized. It is armed. It is indigenous. It is not dependent on money funneled in from Washington and EU financed NGOs. It has an ideology, and it is focused. The Right Sector doesn’t have to pay its protesters to take to the streets like Washington had to do.

The American media is a useless news source. It serves as a Ministry for Government Lies. The corrupt propagandists are portraying the undemocratic removal of Yanukovich as a victory for freedom and democracy. When it begins to leak out that everything has gone wrong, the presstitutes will blame it all on Russia and Putin.  The Western media is a plague upon humanity.

Americans have no idea that the neoconservative regime of the White House Fool is leading them into a Great Power Confrontation that could end in destruction of life on earth.

Ironic, isn’t it.  America’s “first black president,” the person liberals thought would restore justice, morality, and reason to Western civilization, is instead now positioned as the person who will have to accept humiliating defeat or risk the destruction of life on earth.