Still No Jobs for Americans 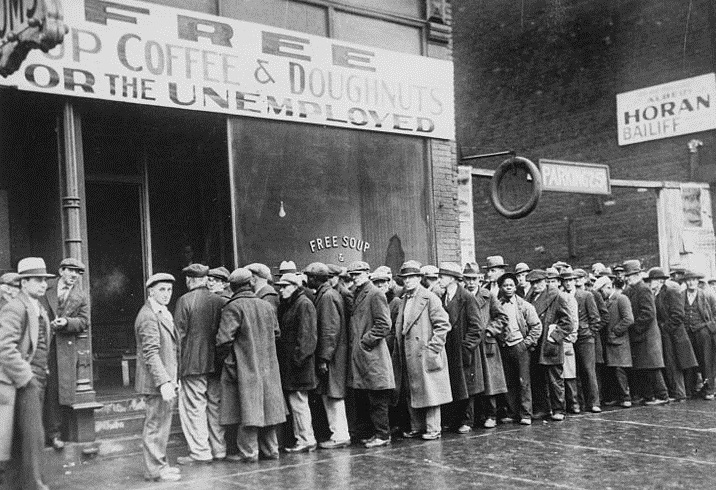 Unemployed men stand in line outside a soup kitchen opened in Chicago by Al Capone during the Great Depression, February 1931 (US Information Agency)

Wholesale and retail trade accounted for 70,700 of these jobs, or 95.5%.  It is likely that the December wholesale and retail hires were temporary for the Christmas shopping season, which doesn’t seem to have been very exuberant, especially in light of Macy’s decision to close five stores and lay off 2,500 employees.  It is a good bet that these December hires have already been laid off.

I noticed today that the financial media presstitutes were a bit hesitant to hype the drop in the rate of unemployment when there was no jobs growth to account for it. The Wall Street and bank economists did their best to disbelieve the jobs report, as did some of the bought-and-paid-for university professors. Too many interests have a stake in the non-existent recovery declared 4.5 years ago to be able to admit that it is not really there.

I have been examining the monthly jobs reports for a decade or longer.  I must say that I was struck by the December report. Normally, a mainstay of jobs gain is the category “education and health services,” with “ambulatory health care services” adding thousands of jobs.  In December, the net contribution of “education and health services” was zero, with “ambulatory health care services” losing 4,100 jobs and health care losing 6,000 jobs. If memory serves, this is a first.  Perhaps it reflects adverse impacts of the ripoff known as Obamacare, possibly the worst piece of domestic legislation passed in decades.

I was also struck by the report that the gain in employment of waitresses and bartenders, normally a large percentage of the job gain, was down to 9,400 jobs, which were offset by declines elsewhere, such as the layoff of local school teachers.

Aren’t Washington’s priorities wonderful?  $1,000 billion per year in Quantitative Easing, essentially subsidies for 6 banks “too big to fail,” and nothing for school teachers.  It should warm every Republican’s heart.

A tiny bright spot in the payroll jobs report is 9,000 new manufacturing jobs. The US manufacturing workforce has declined so dramatically since jobs offshoring became the policy of American corporations that 9,000 jobs doesn’t register on the scale. Fabricated metal products, which I think is roofing metal, accounted for 56% of the manufacturing jobs. Roofing metal is not an export.  Employment in the production of products that could be exported, such as “computer and electronic equipment,” and “electronic instruments” declined by 2,400 and 3,500 respectively.

Clearly, this is not a payroll jobs report that provides cover for the looting of the prospects of ordinary Americans by the financial and offshoring elites. One can wonder how the BLS civil servants who produced it can avoid retribution. It will be interesting to see what occurs in the January payroll jobs report.