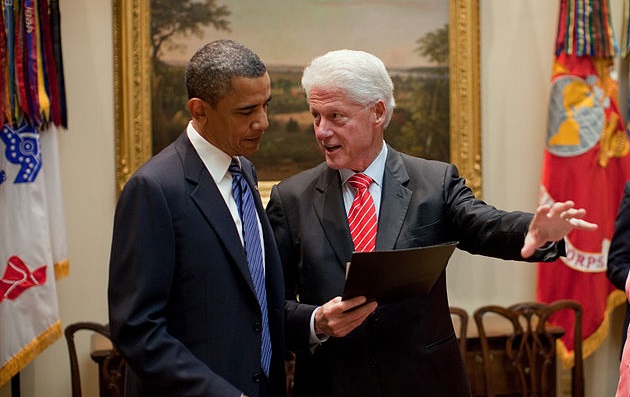 BEIRUT — They will if they can, and in league with the US Zionist lobby, they well might. The latter is currently eager to fund and promote the Clintons’ new project, according to New Orleans sources close to political operative James Carville, a veteran of three Clinton and two Obama presidential campaigns. Carville has publicly sworn recently, while out late with drinking buddies in his favorite French Quarter bar, that he was finished “pimping for the Clintons.”  Plus he has come to “really admire the current President”.

But Bill is not and does not.

Despite the Clinton estate, which is by now valued at tens of millions of dollars and continues its rapid expansion since the White House days, the former President is reportedly often short-tempered and grouchy these days.

Put very simply, Bill’s problem has to do with his planned “third act” in life. Le Clinton needs La Clinton to return the Oval Office to where Le claims he belongs.  But La is tired and laments that she does not really want to go through another grueling and humiliating (her word) Presidential campaign season. Addingto domestic pressure at home, one imagines, is the fact that the 2016 Presidential campaign is already starting as White House aspirants move around Iowa and New Hampshire and to myriad venues launching their ‘trial balloons.’

Mrs. Clinton is reportedly hearing from her husband sweet entreaties and whispers to the effect that all she needs to focus on is getting elected in November of 2016 and he will help her campaign a lot. If things work out as hoped, La Clinton’s name will be on the White House stationery, but Le will run the show through 2024 from “behind the curtains and do the yeoman labor in the vineyards for America,” according to one former Member of the Democratic National Committee with whom this observer served as DNC member from Oregon years ago.

There are several surfacing problems, some apparently not anticipated, with the former President’s reportedly carefully crafted plan. An increasingly major one is perceived to be President Obama.  “Barack appears to be threatening to break out of the Uncle Tom mold and get all uppity and radical and do things he claims to have believed in from childhood but put off until his last term,” according to the same source. American history reveals many similar transformations of lame duck Presidents with many falling short of their last term goals.  Obama appears ready to fight for his.

As he increasingly discusses privately with friends in Congress, Barack Obama wants to extricate the US at least to some extent from the Middle East quagmire, end more than a decade of criminal wars, get real about the phony ‘war on terror’ and lessen US funding and even lighten US and UN political cover for the Zionist regime still illegally occupying Palestine. He is equally passionate about wanting to “re-build America—its schools, medical system and infrastructure” as he stressed during his joint appearances with the Republican nominee Mitt Romney, shortly before Obama’s stronger than expected showing on election night.

Moreover, Republicans don’t appear to have connected much with the voters and they have yet to capitalize on Obama’s shortcomings. The Clinton camp sees Obama’s hoped for legacy as fatal to their chances, not least for the reason that he makes no bones about being livid over Tel Aviv’s obstructionism during “peace negotiations” which he has reportedly come to believe are a ploy to steal more Palestinian land and undermine any realistic prospect for a viable Palestinian state.

The Clintons are said to believe that if Obama breaks loose from the Washington establishment and returns to the ideas his unconventional mother—who was an activist, liberal, multicultural student who not only advocated full racial and gender equality, but married an African—that the US right wingers and the Zionist lobby will combine to put a Republican in the White House.

One political operative on Capitol Hill who follows Presidential politics closely claims that over the past few weeks, one issue has come to symbolize the Obama Administrations goals and Obama’s potential legacy, and that is restoring some modicum of normalization of US-Iranian relations.  John Kerry, a potential 2016 White House candidate himself, and one who stands to gain substantially at the ballot box for his role, since his and Obama’s views are increasingly in synch with the American public, which according to a recent poll favors improved relations with Iran by more than 80%.

For Le Clinton and his team, this is not good news, less so for the Zionist Congressional lobby which reliably and consistently votes for Israel’s interests over their own constituents’ needs and wishes. For this reason Tel Aviv has gone all out to force Congress to impose more sanctions on the people of Iran and to raise barriers to the Obama-Kerrey initiative. This week they failed again to scuttle hopes for improved US-Iran relations, try as they might, to impose threats that would force the Rouhani government in Tehran to retreat from their gamble that the American side was serious about resolving the nuclear file and improving relations while scrapping some of the US political sanctions that having increasingly been targeting the civilian population of the Islamic Republic with the hope of igniting a street movement for regime change given the inflating cost of food and consumer, and unavailability of certain chronic care drugs.

Some of the regular cast of characters who appear as if for a Broadway curtain call when summoned by AIPAC—Congressmen Eric Cantor, Mark Kirk, Ed Royce, Elliot Engel, Robert Menendez, Michael McCaul, and Rep. Brad Sherman among others—failed to parry John Kerry’s arguments late this week before Congress as he argued for more time to see what will happen over the next six months. This observer’s Congressman in Maryland’s 5th District, whose staff swear they read my 2-cents worth of rants, actually balked and left the lobby high and dry on the efforts to abort the While House initiative. Times they may be changing—however late on the game clock.

Kerry teamed with Obama in the White House decision to crack down on oil and shipping companies accused of helping Iran evade economic sanctions, a move that came as the White House appeared to gain ground in its fight to keep Congress from enacting even tougher restrictions that threaten to derail nuclear talks with the Islamic republic. “We will continue to take action against those who evade, or attempt to evade, our manifold sanctions on Iran,” David S. Cohen, the Treasury Department’s undersecretary for terrorism and financial intelligence, told Congress this week. “Make no mistake about it, Iran is still off-limits for most oil and banking transactions,” Cohen said.

The enforcement actions against Asian, European, and Iranian firms were announced moments before two of the administration’s top experts on Iran appeared before a Senate panel to warn again that the imposition of further sanctions could doom any chance of a final agreement with Iran on permanent limits to the country’s nuclear program. The White House is reported to have loved the timing, which helped deflate the Zionist project.

Late this week, according to a former aide who claims that she has given up politics, word from the Clinton camp is that Bill has apparently concluded that La Clinton can’t secure the Oval Office without the green (as in the color of US currency) light from Tel Aviv.

Even though this observer was a Jerry Brown supporter at the 1992 Democratic Convention in New York and stuck with my guy despite heavy lobbying from William Jefferson Clinton, I sort of like the fellow and think the charitable work he is doing is helping many and he should stick with it. As for Hillary, as she told Katie Couric recently, what she really wants most is a grandchild to love and spoil. Let it be so…