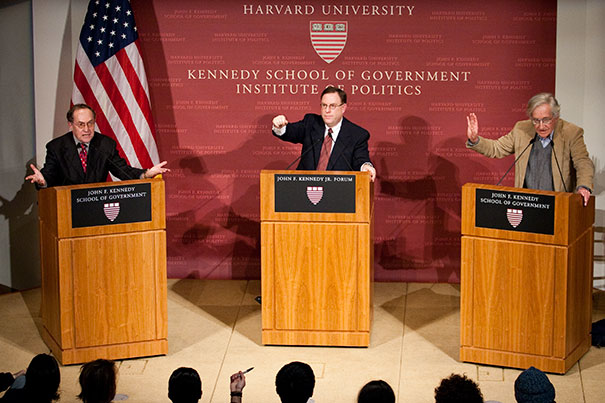 My friend and former collaborator, Howard Friel, has written an intriguing book contrasting the worldviews and polemical styles of two Jewish American intellectuals with world class reputations, Noam Chomsky and Alan Dershowitz (Friel, Chomsky and Dershowitz: On Endless War and the End of Civil Liberties, Olive Branch Press, 2014). The book is much more than a comparison of two influential voices, one critical the other apologetic, with respect to the Israel/Palestine struggle and the subordination of private liberties to the purveyors of state-led security at home and abroad. Friel convincingly favors Chomsky’s approach both with respect to the substance of their fundamental disagreements and in relation to sharply contrasting styles of argument.

Chomsky is depicted, accurately I believe, as someone consistently dedicated to evidenced based reasoning reinforced by an abiding respect for the relevance and authority of international law and morality. Chomsky has also been a tireless opponent of American imperialism and military intervention, and of oppressive regimes anywhere on the planet. He is also shown by Friel to be strongly supportive of endowing individuals whether citizens or not with maximal freedom from interference by the state. From such perspectives, the behavior of Israel and the United States are assessed by Chomsky to be betrayals of humane values and of the virtues of a constitutional democracy.

In contrast, Dershowitz is presented, again accurately and on the basis of abundant documentation, as a dirty fighter with a readiness to twist the truth to serve his Zionist predilections, which include support for the post-9/11 drift toward authoritarian governance, and an outrageous willingness to play the anti-Semitic card even against someone of Chomsky’s extraordinary academic achievements in the field of linguistics and of global stature as the world’s leading public intellectual, who has an impeccable lifelong record of moral courage and fidelity to the truth. Dershowitz has devoted his destructive energies to derailing tenure appointments for critics of Israel and for using his leverage to badger publishers to refrain from taking on books, however meritorious, if they present either himself or Israel in what he views to be a negative light.

Friel illustrates the contrast between these talented and titanic antagonists by reference to the much publicized debate about Robert Faurisson, the French Holocaust denier. Chomsky signed a petition in 1979 that defended Faurisson’s freedom of expression, an act consistent with his overall long record of support for unrestricted academic freedom. Dershowitz abandons his own earlier allegiance to a similar approach, not only refusing to allow free speech to protect Faurisson, but lashing out to condemn Chomsky for his supposed show of support for Holocaust denial because he had the temerity to defend Faurisson’s right to say what he said. This is a typical tactic employed by Dershowitz, deliberately confusing a principled support for the right to hold and espouse ethically unacceptable views with an alleged identification and sympathy with the substance of the views being expressed. To contend that Chomsky is tacitly embracing Holocaust denial by supporting Faurisson was, as Friel conclusively shows, clearly defamatory, ignoring numerous occasions on which Chomsky has denounced the Nazi experience culminating in the Holocaust as a predominant historical instance of pure evil.  For Dershowitz to overlook such plain facts in relation to Chomsky on such an inflammatory matter is to show his true colors as a dirty fighter who has no inhibitions about smearing his opponents, however distinguished and honorable they happen to be, and no matter how clearly he must know better. Dershowitz must be assumed to realize that Chomsky’s entire life displays an abiding concern for the ethical treatment of ‘the other,’ and to allege that somehow Chomsky is himself flirting with Holocaust denial is the most irresponsible slander and ironically, an unforgiveable abuse by Dershowitz of the freedom of expression, which transgresses civility if not the law. Civil discourse and public reason in a democratic society depend on the overall willingness of individuals to show self-discipline, and avoid exploiting the opportunities for defamation that the law allows in commentary on so-called public figures.

Dershowitz is primarily known, aside from his controversial notoriety as a trial lawyer in high profile criminal cases, as an unconditional defender of Israel against a wide range of responsible critics. He wrote a number of books and numerous articles with vicious attacks on such moral authority figures as Jimmy Carter and Archbishop Desmond Tutu, including his notorious tract The Case Against Israel’s Enemies: Exposing Jimmy Carter and Others Who Stand in the Way of Peace (2008). Even such mainstream and widely respected experts on world affairs as Stephen Walt and John Mearsheimer become targets of Dershowitz’s calumny because of their daring to write critically and persuasively about the destructive influence of the Israeli Lobby in relation to the prudent and rational pursuit of American national interests in the conduct of foreign policy in their book, The Israeli Lobby and U.S. Foreign Policy (2007).

At this point, I should acknowledge that I am far from being a neutral observer. I have been accused on several occasions of being an ‘anti-Semite’ and ‘bigot’ by Dershowitz, primarily in relation to my role as UN Special Rapporteur on Occupied Palestine, but even in response to my endorsing blurb of Gilad Atzmon’s seminal challenge directed at liberal Zionist and Jewish thought in The Wandering Who? (2011). Similar insults were directed by Dershowitz at my predecessor as Special Rapporteur, John Dugard, a distinguished jurist from South Africa and as unbiased and balanced a champion of human rights and international law as I have ever known. Attacking the critics of Israel, especially those possessing strong academic and ethical credentials, is a nasty illustration of what I have called ‘the politics of deflection,’ that is, avoiding the substance of criticisms by denouncing the critics and their auspices with the intention of shifting the conversation. Such attacks are clearly intended to shut down criticism of Israel by subjecting to withering abuse anyone who dares to violate the Zionist taboo.

Perhaps, the most important part of Friel’s engaging book is his depiction of Dershowitz’s advocacy of the ‘preventive state’ as overcoming an earlier essential postulate of liberal democracy, the presumption of innocence. In the preventive state that Dershowitz posits as necessary and hence desirable, we all become for the government legitimate objects of suspicion, and the higher goals of counter-terrorism. Such a line of analysis mandates the state to act preventively rather than reactively, and hence to employ the full coercive apparatus of the state to identify potential enemies of the state before they have the opportunity to act. For a more challenging rendition of this argument than offered by Dershowitz, I strongly recommend reading Philip Bobbitt’s Terror and Consent: The Wars for the Twenty-first Century (2008). This reinterpretation of the balance between security and freedom reverses the traditional emphasis of the rule of law upon reactive forms of security, its logic being used to rationalize torture, as well as preventive detention of individuals and preventive warfare against states, non-state actors, and even individuals, perceived to pose future threats. Such rationalizations undermine the unconditional criminalization of torture and completely upend the UN Charter effort to confine the role of force in international relations by limiting its legal invocation to situations of self-defense against a prior armed attack by a state. The launching of the disastrous war against Iraq in 2003 was a clear international example of the preventive state in action as are the kill lists compiled weekly for drone attacks on individuals resident in foreign countries. Another facet of such a posture is embodied in the indefinite detention of numerous individuals in Guantanamo for years without charges and absent credible incriminating evidence.

Of course, rigid legalism is not the alternative to a rejection of the preventive state, but an exaggeration of the terrorist threat is tantamount to willing the end of political democracy as it has evolved over the centuries. We have seen that even a supposedly liberal president, Barack Obama, has endorsed an authoritarian approach in numerous areas of governance including reliance on drone warfare and support for virtually limitless global networks of surveillance. The treatment of such whistleblowers as Chelsea Manning and Edward Snowden is also emblematic of the preventive state, directing public attention to the unlawful release of information while declining to acknowledge or remedy the crimes of state being exposed. Needless to say, Chomsky is acutely alert to these dangers, and has long stood for the maintenance, even the enhancement, of traditional liberties of the individual despite alleged security claims to the contrary.

Friel has given us a brilliantly analyzed comparison of two vivid engaged and intelligent activists who personify the alternative scenarios available to the United States, the choice of which is of great consequence for the rest of the world. Only a determined advocate of unfreedom and injustice could fail to side with Chomsky in this debate about the political future of the planet. In this larger view, the Dershowitz defense of Israel against the most responsible of critics is but an illustration of his broader alignment with repressive tendencies at home and abroad despite his feeble pretensions to the contrary.  Clearly Chomsky is the winner in this contest if fairly umpired, both in terms of coherence and acceptability of worldview, as well as the ethics of public discourse. Dershowitz, apparently propelled by the awkwardness of his convictions, seems always ready to adopt the Darth Vader tactics that Dick Cheney unabashedly favored, coyly acknowledging that it meant going to ‘the dark side.’

Let me observe finally, and with due allowance made for my own stake in this effort to assess the comparative merits of style and substance on the part of these antagonistic titans, that Howard Friel has once again contributed a necessary book for all those dedicated to the pursuit of justice in relation to Israel/Palestine and more generally in international life. (In this spirit I highly recommend Friel’s earlier expose of the Danish climate skeptic, Bjorn Lomborg, in his book The Lomborg Deception: Setting the Record Straight about Global Warming [2010] and of the mighty New York Times in The Record of the Paper: How the New York Times Misrepresents U.S. Foreign Policy [2004], of which I was the proud co-author.) A cardinal virtue of Friel’s approach is to recognize and explain the role of international law with respect to sustaining world peace and attaining global justice.