Life and Loathing in Greater Israel: A Review of Max Blumenthal’s ‘Goliath’

This is a powerfully written book, a mixture of current events, historical data, and personal anecdotal comments and stories.  Throughout there are pervasive themes that clearly outline the nature of the Israeli state as it exists today. From May 2009 up to early 2013, Max Blumenthal passed “many prolonged stays in the Holy Land,” from which he derived this current assessment.

The over-riding themes—and they tend to intermingle within the right wing ideologies of the Netanyahu/Lieberman government—are all based on the demographic threat that Israel perceives to be the main problem, which has always been seen as a problem from the earliest Zionists.

While in the past there were some at least minimally effective two-country advocates, the current situation has developed into one of over-riding racist state fascism.  This expresses itself in the ongoing settlements developments, now more overtly antagonistic to the Palestinians; the many race based laws prohibiting Palestinian participation in society, accompanied by overt acts of racism to Palestinians and African refugees; and open expressions of hostility indicating the desire to simply get rid of both groups.

The idea of a “Jewish and democratic state” also comes to a crashing halt as there are many instances of political leaders essentially indicating that they would choose Jewishness before democracy. 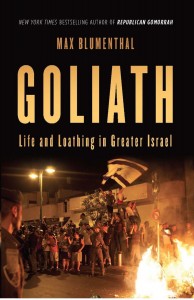 The first section of the work provides the current events background that gives rise to the Netanyahu/Lieberman government.  Blumenthal quotes Netanyahu as telling Israelis “To steel themselves for ‘an ongoing national exertion and the possibility of periodic bouts of international confrontation.’”  He says this summarizes “the colonial logic animating his approach to the Palestinians and rationalizing it to the outside world.”

Blumenthal continues from there, discussing various domestic laws,  the banning of certain books, the use of IDF and Shin Bet personnel to control the education system, the rise of security overcoming democratic concerns, and the gradual erosion of the Supreme Court in face of Zionistic fascism within the “tribalistic culture.”  The much more open and hostile racial and fascistic comments keep coming, the national disguising of the news as in the Mavi Marmara incident, the effects of the national propaganda in keeping with the Knesset resets shows “the end of democracy is an inevitable outcome,” while the “occupation is hidden behind all these layers of fake democracy.”

The next section recalls the violence of the occupation, demonstrating that with the current events within the West Bank and in Gaza, the Days of ‘48 have come again, now with a “fascist government that has proven itself capable of massacring the unarmed.”  That violence all comes back to ethnic/racial identity “that is the basis of apartheid.”  A quick review of the initial attacks of 1948 and the original quotes of that era survive: “there is no room in the country for both people;” and “Not one village must be left, not one tribe.”

The holocaust is another theme throughout the book as it has become a theme of daily Israeli life, brought back as an excuse to continue their own violence towards others.  Yet, as seen by a few, “We perpetuate death, and that’s why we will never become a normal people.”

The military is another obvious centralizing theme throughout the work.  It covers the main part of two chapters, and its overall pervasiveness creates “a colonial culture in which Jewish Israeli youth become conditioned to act as sadistic overlords toward their Palestinian neighbors, and of a perpetual conquest that demanded indoctrination begin at an early age and continue perpetually throughout their lives.”  The military has become the “most important institution of socialization and indoctrination” in Israeli society.   Within that institution are the wellsprings of the misogynist nature of society and the highly sexualized nature of the racial taunts.

But even more powerful than the military, in liaison with it, religious nationalism now trumps both the military and justice systems.  From this extreme right group now in control lie the “harbingers of wild racial violence in the future.”  Part of this future are “concentration camps…erected by the Israeli rulers” as foreseen by Yeshayahu Leibowitz.  The criminalizing of refugees—Palestinian and the blacks from the Sudan—demonstrates “a harrowing vision of what was possible when the government chose to tap into the public’s unfathomably deep wellspring of prejudice.”

Towards the end of the book, Blumenthal discusses the wall mentality—the security wall, the Gaza walls, the walls of the Sinai, the new walls along the Jordanian border and with Syria.  Some realize, “This is our future…we’ve become a frightened nation that imprisons itself behind fences and retreats into defensive walls,” making “increasingly rigid psychological barriers.”

In his final view, Blumenthal shows that the sexualized racial taunting, the overt racial violence, is “an increasingly common feature of Israeli political language” in “the adventurous world of Israeli proto-fascism….The status quo…so entrenched, and the occupation…so manageable, [they] no longer felt compelled to mask their agenda with disingenuous appeals to Western opinions….Annexing the West Bank had finally entered the mainstream.”

One final irony highlighted itself:  thirteen per cent of Israeli citizens now live outside the country.  They tend to be the affluent, educated, secular and liberal younger members of Israeli society.  The irony is strengthened in that Berlin has become one of the main expatriate colonies, where the Israelis go to find an open liberal more free environment to live.

Israel currently maintains diplomatic and trade relationships with many other countries, much of that on a military/security level.  The image of Israel presented in Goliath is one of a fearful, arrogant, racist, non-democratic state controlled by a select right wing group.  It has captured the media, the military, the Knesset and the justice system into one over-riding racialized fascist theocracy, far removed from any democracy, perpetuating its systems of fear in order to keep power intact.

Goliath is a powerful and distressing book for a view on what life in modern Israel is like.