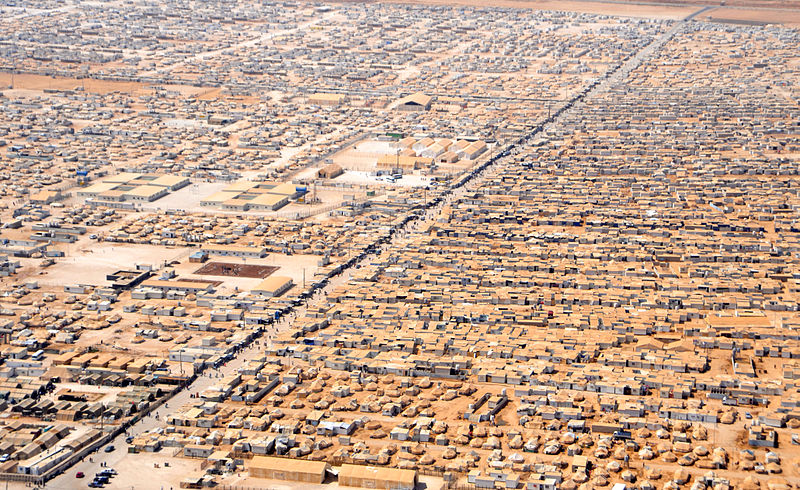 The Za'atri camp for Syrian refugees in Jordan, July 18, 2013 (US Department of State)

Ein el Helwe camp, Saida, LEBANON — The Syrian conflict continues pushing Palestinian refugees from that beleaguered country’s ten official and three unofficial Palestinian camps, forcing the majority to flee to Lebanon despite the latter outlawing for Palestinians illegally expelled from their homes during the 1948 Nakba even the most elementary civil right to work or to own a home.

Palestinian refugees make up the second most massive displacement from the Syria crisis, with an estimated 65% of the 500,000 Palestinians in Syria having been displaced, along with 7 million Syrians. It is becoming ever more difficult for Palestinians to flee as they are increasingly abused in neighboring countries while totally barred from seeking refuge in their own country, Palestine.

Intermittent, sporadic hostilities including airstrikes, shelling, and mortars continue and during the past two months around the camps of Yarmouk, Husseiniyah, Sbeineh, Barzeh, Jobar, Qaboun, Khan Eshieh and Dera’a. A total 125 Palestinian refugees were reportedly killed as a result of the hostilities: 22 in Yarmouk, 18 in Dera’a, 13 in Husseiniyah, and 12 in Khan Eshieh, among others. This is the highest number of reported Palestinian deaths for months. Yarmouk and Sbeineh are currently sealed off with UNRWA increasingly concerned about the well-being of those trapped.

Approximately 65,000 Palestinian refugees from Syrian camps are currently in Lebanon. The majority, 32%, are in Saida, 19% are in Tyre, 17% in central Lebanon, and 16% each in north Lebanon and Beqaa, according to data given this observer during visits to UNWRA headquarters in Damascus.

Arriving Palestinian students report, as UNWRA has documented, that schools partially hosting displaced Palestinians and Syrians and also operating as shelters and that three shifts for students are not uncommon; nor are shifts for sleeping. A high number of schools are closed as many are damaged, parents are unwilling to send their children to school for security reasons, and a large percentage of the population are constantly on the move. There is uncertainty whether even emergency education provisions will be sustainable during the coming winter, as well as food shortages, decreasing housing availability, and limited or no access to school supplies. The key question is whether Palestinians in Lebanon and neighboring countries will have access to education at all.

Through no fault of its own, UNWRA’s delivery of education to the overwhelming majority of Palestinian refugee children in Syria has been severely impaired, while Lebanon has additional problems.

Recently compiled data with respect to Palestinian refugees’ education crisis is contained in a joint UNWRA-EU publication titled “Back to School, Syria Emergency: Palestine Refugee Children”.   Among its findings are that two-thirds of Palestinian refugee youngsters in Syria have been affected by school closures.  Of the 118 UNWRA schools in Syria, 68 are closed due to war damage, 10 are being used as emergency shelters for displaced persons, 40 are operational as of November 11. Additionally, UNWRA and the Syrian Ministry of Education have cooperated to set up schools in shared buildings.

UNRWA is operating 694 elementary and preparatory schools across its five fields of operation, as well as eight secondary schools in Lebanon, providing free basic education for around 550,000 Palestinian refugee children, but they do not have the classroom space for the thousands of incoming Syrian youngsters in Lebanon, where fewer than 35% of Palestinian children (from Syria) have been enrolled in school. In addition, UNWRA’s program budget for 2012-13 projects chronic financial disparity between budget, income, and expenditure. Palestinians in Lebanon and Syria bear the burden of compromised education and diminished health care.

Despite being a resolute advocate for UNWRA, this observer is aware that its budget warrants scrutinizing. Almost 75 percent of UNWRA’s budget, or $675 million, between 2010-13 was locked in to pay staff salaries. Salary expenditure has gone up from $400 million in 2008 to more than $502 million in 2013. However, spending on medical supplies in 2013 is approximately the same as it was in 2009.

As American University of Beirut Professor Rosemay Sayigh reminds us, before we blame Lebanon totally for the harsh policies towards Palestinian refugees, we must remember that if the “Great Powers” had insisted on Israel repatriating the refugees after the 1948 Nakba according to UN General Assembly Resolution 194 (December 1948), the refugee problem would not exist today, and the Arab states would not have to deal with it.

Against this disturbing backdrop is the fact that local NGO’s have few resources to assist with refugee education. Yet, there are a few bright spots for students coming mainly from the Palestinian community itself in Lebanon and some friends of Palestine abroad.

One example is this year’s establishment of the Sabra-Shatila Scholarship Program (sssp-lb.com) made possible by tuition grants for Palestinian refugees in Lebanon from a remarkable American patriot and humanitarian.

During these few months of its existence, the SSSP has awarded 99 tuition grants in Shatila and Burj al Barajeneh camps and plans for 150 more Palestinian scholarships for spring semester in Ein el Helwe camp. According to Zeinab el-Hajj, Executive Director of the SSSP, each tuition grant recipient has committed to giving back to her or his community especially in the field of education. Already many scholarship grantees have committed to tutoring their countrymen arriving from Syria or living in the harshest camps (including the three noted above) where dropout rates are highest and graduations are lowest. “We at SSSP do not seek out only youngsters with the highest GPA’s,” said el-Hajj. “We want to help those who without our tuition grants might well not even go to college or are very likely to drop out.”

An American friend of Palestine urged the assembled scholarship recipients in the slums of Burg al Barajeh camp last month, when 80 Palestinians youngsters received tuition grants: “Pursue your dreams of a better life for yourselves and your families pending your return to Palestine.”  He reminded the cheering students that, “An education is forever and its purpose is to enjoy a more productive life while fulfilling all that you are capable as you give back to your respective communities. Pursuing higher education is the quintessential act of Resistance against oppression and occupation everywhere. Education cannot be ethnically cleansed, stolen, tortured, jailed, uprooted, bulldozed, massacred, murdered, bombed or burned down. Staying in school pursuing one’s dreams is what your cherished forebears, forced from their homes and trekked from Palestine into Lebanon that summer / fall 1948, would want for you, and expect of you.”

As one-on-one tutoring by SSSP scholarship recipients increases within the camps of Lebanon in support of their countrymen from Syria, all people of good will cannot but be inspired by the idealism, energy and commitment of Palestinians pursuing higher education as was the historical norm when Palestinians were considered the vanguard of education in this region.