I spent last week at the United Nations, meeting with ambassadors of countries in the Middle East and presenting my final report to the Third Committee of the General Assembly as my term as Special Rapporteur for Occupied Palestine comes to an end. My report emphasized issues relating to corporate responsibility of those companies and banks that are engaged in business relationships with the settlements. Such an emphasis seemed to strike a responsive note with many delegations as a tangible way of expressing displeasure with Israel’s continuing defiance of its international law obligations, especially in relation to the unlawful settlements being provocatively expanded in the West Bank and East Jerusalem at the very moment that the resumption of direct negotiations between the Palestine Authority and the Government of Israel is being heralded as a promising development. 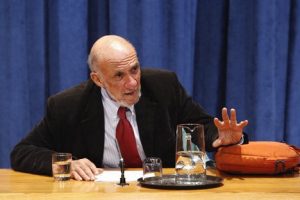 There are two reasons why the corporate responsibility issue seems to be an important tactic of consciousness raising and norm implementation at this stage: (1) it is a start down the slippery slope of enforcement after decades of UN initiatives confined to seemingly futile rhetorical affirmations of Israeli obligations under international law, accompanied by the hope that an enforcement momentum with UN backing is underway; (2) it is an expression of tacit support for the growing global movement of solidarity with the struggle of the Palestinian people for a just and sustainable peace agreement, and specifically, it reinforces the claims of the robust BDS (boycott, divestment, and sanctions) Campaign that has itself scored several notable victories in recent months.

My intention here is to put aside these issues and report upon my sense of the diplomatic mood at the UN in relation to the future of Israel/Palestine relations. There is a sharp disconnect between the public profession of support for the resumed peace negotiations as a positive development with a privately acknowledged skepticism as to what to expect. In this regard, there is a widespread realization that conditions are not ripe for productive diplomacy for the following reasons: the apparent refusal of Israel’s political leadership to endorse a political outcome that is capable of satisfying even minimal Palestinian aspirations; the settlement phenomenon as dooming any viable form of a ‘two-state’ solution; the lack of Palestinian unity as between the Palestinian Authority and Hamas undermining its representational and legitimacy status.

The most serious concern on the Palestinian side is whether protecting the interests and rights of the totality of the Palestinian people in a peace process can be achieved within the present diplomatic framework. We need to be constantly reminded that ‘the Palestinian people’ cannot be confined to those Palestinian living under Israeli occupation: refugees in neighboring countries; refugees confined within occupied Palestine, but demanding a right of return to their residence at the time of dispossession; the Palestinian minority living in Israel; and 4-5 million Palestinians who constitute the Palestinian diaspora and its underlying reality of enforced exile.

It was also clear that the Palestinian Authority is confronted by a severe dilemma: either to accept the inadequate proposals put forward by Israel and the United States or reject these proposals and be blamed once again by Tel Aviv and Washington for rejecting a peace offer. Only some Israeli anxiety that the Palestinians might actually accept the U.S. proposals might induce Israel to refuse, on its side, to accept what Washington proposes, and spare the Palestinians the embarrassment posed by the dilemma of swallowing or spitting. That is, Israel, when forced to show its hand, may actually be unwilling to allow any solution to the conflict based on Palestinian self-determination, even if heavily weighted in Israel’s favor. In effect, within the diplomatic setting there strong doubts exist as to whether the present Israeli leadership would accept even a Palestinian statelet even if it were endowed with only nominal sovereignty. In effect, from a Palestinian perspective, it seems inconceivable that anything positive could emerge from the present direct negotiations, and it is widely appreciated that the PA agreed take part only after being subjected to severe pressure from the White House and Secretary Kerry. In this sense, the best that Ramallah can hope for is damage control.

There were three attitudes present among the more thoughtful diplomats at the UN who have been dealing with the Palestinian situation for years, if not decades: the first attitude was to believe somehow that ‘miracles’ happen in politics, and that a two state solution was still possible; usually this outlook avoided the home of the devil, the place where details reside, and if pressed could not offer a scenario that explained how the settlements could be shrunk sufficiently to enable a genuine two-state solution to emerge from the current round of talks; the second attitude again opted to support the resumption of the direct talks because it was ‘doing something,’ which seemed preferable to ‘doing nothing,’ bolstering this rather vapid view with the sentiment ‘at least they are doing something’; the third attitude, more privately and confidentially conveyed, fancies itself to be the voice of realism in world politics, which is contemptuous of the advocacy of rights and justice in relation to Palestine; this view has concluded that Israel has prevailed, it has won, and all that the Palestinians can do is to accommodate an adverse outcome, acknowledging defeat, and hope that the Israelis will not push their advantage toward a third cycle of dispossession (the first two being 1948, 1967) in the form of ‘population transfer’ so as to address their one remaining serious anxiety—the fertility gap leading to a feared tension between professing democracy and retaining the primary Zionist claim of being a Jewish state, the so-called ‘demographic bomb.’

As I reject all three of these postures, I will not leave my position as Special Rapporteur with a sense that inter-governmental diplomacy and its imaginative horizons have much to offer the Palestinian people even by way of understanding evolving trends in the conflict, much less realizing their rights, above all, the right of self-determination. At the same time, despite this, I have increased my belief that the UN has a crucial role to play in relation to a positive future for the Palestinian people—reinforcing the legitimacy of seeking a rights based solution rather than settling for a power based outcome that is called peace in an elaborate international ceremony of deception, in all likelihood on the lawn of the White House. In this period the UN has been playing an important part in legitimating Palestinian grievances by continuously referencing international law, human rights, and international morality.

The Israelis (and officialdom in the United States) indicate their awareness of this UN role by repeatedly stressing their unconditional opposition to what is labeled to be ‘the delegitimation project,’ which is a subtle propagandistic shift from the actual demand to uphold Palestinian rights to the misleading and diversionary claim that Israel’s critics are trying to challenge Israel’s right to exist as a state sovereign state. To be sure, the Palestinians are waging, with success a Legitimacy War against Israel for control of the legal and moral high ground, but they are not at this stage questioning Israeli statehood, but only its refusal to respect international law as it relates to the fundamental rights of the Palestinian people.

Let us acknowledge a double reality. The UN is a geopolitical actor that is behaviorally manipulated by money and hard power on many fundamental issues, including Palestine/Israel; this stark acknowledgement severely restricts the effectiveness of the UN with regard to questions of justice. Fortunately, this is not the whole story. The UN is also a normative actor that articulates the grievances of peoples and governments, influences public discourse with respect to the global policy agenda, and has great and distinctive symbolic leverage in establishing the legitimacy of claims. In other words, the UN can say what is right, without being necessarily able to do what is right. This distinction summarizes the narratives of articulating the Palestinian claims and the justice of the Palestinian struggle without being able to overcome behavioral obstacles in the geopolitical domain that block their fulfillment.

What such a gap also emphasizes is that the political climate is not yet right for constructive inter-governmental negotiations, which would require both Israel and the United States to recalculate their priorities and to contemplate alternative future scenarios in a manner that is far more congruent with upholding the panoply of Palestinian rights. Such shifts in the political climate are underway, and are not just a matter of changing public opinion, but also mobilizing popular regional and global support for nonviolent tactics of opposition and resistance to the evolving status quo. The Arab Spring of 2011 initially raised expectations that such a mobilization would surge, but counter-revolutionary developments, political unrest, and economic panic have temporarily, at least, dampened such prospects, and have lowered the profile of the Palestinian struggle.

Despite such adverse developments in the Middle East from a Palestinian perspective, it remains possible to launch within the UN a broad campaign to promote corporate responsibility in relation to the settlements, which could gradually be extended to other unlawful Israeli activities (e.g. separation wall, blockade of Gaza, prison and arrest abuses, house demolitions). Such a course of action links efforts within the UN to implement international law with activism that is already well established within global civil society, being guided by Palestinian architects of 21st century nonviolent resistance. In effect, two disillusionments (armed struggle and international diplomacy) are coupled with a revised post-Oslo strategy giving the Palestinian struggle a new identity (nonviolent resistance, global solidarity campaign, and legitimacy warfare) with an increasing emancipatory potential.

Such an affirmation is the inverse of the ultra-realist view mentioned above that the struggle is essentially over, and all that is left is for the Palestinians to admit defeat and for the Israelis to dictate the terms of ‘the peace treaty.’ While admitting that such a visionary worldview may be based on wishful thinking, it is also appropriate to point out that most political conflicts since the end of World War II have reflected the outcome of legitimacy wars more than the balance of hard power. Military superiority and geopolitical leverage were consistently frustrated during the era of colonial wars in the 1960s and 1970s. In this regard, it should be understood that the settler colonial enterprise being pursued by Israel is on the wrong side of history, and so contrary to appearances, there is reason to be hopeful about the Palestinian future and historical grounds not succumb to the dreary imaginings of those who claim the mantle of realism.