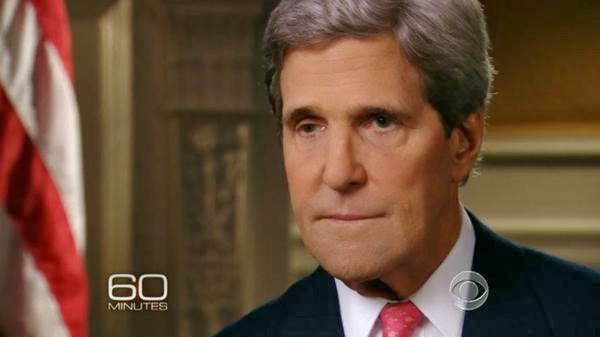 In an extensive interview with Scott Pelley on CBS‘ “60 Minutes” on September 30, U.S. Secretary of State John Kerry revealed a startling lack of awareness of certain basic facts regarding Iran’s nuclear program and the history of various proposals Iran has made to alleviate suspicion over its intentions.

Such ignorance goes a long way to explaining how and faulty and false information is disseminated by politicians, goes unchallenged by the press and is subsequently regurgitated by professional pundits who take government declarations at face value without engaging in either critical thinking or independent verification.

Interviews such as Kerry’s on “60 Minutes” effectively launder lies by turning false information into uncontested fact, simply by virtue of their repetition by someone believed to be both knowledgeable and reputable.

During the interview, the Secretary of State and interviewer Scott Pelley said a great many questionable things; however, perhaps none was as egregious as this bizarre exchange:

Scott Pelley: Give me an example, one concrete step, one thing that they can do to assure the world that they’re giving up their ambitions.

Scott Pelley: Enrichment of uranium, which is what happens at Fordow.

Scott Pelley: Throw the doors open to that place.

John Kerry: Well, that, among other things. Look, I believe, that we have hopes. President Obama clearly welcomes President Rouhani’s overtures. But words are not going to replace actions. What we need are actions that prove that we and our allies, our friends in the region, can never be threatened by this program.

Scott Pelley: But the United States would look favorably on relaxing or eliminating the sanctions if the Iranians were serious about abandoning their nuclear weapon.

First, the International Atomic Energy Agency (IAEA), which monitors and safeguards “international community’s requirements regarding nuclear programs” has never once found Iran to be in violation of its obligations under the Nuclear Non-Proliferation Treaty and has consistently affirmed that Iran’s nuclear program remains peaceful, as no nuclear material has ever been diverted to a military program.

Regardless of what questions may remain about Iran’s past research or hypothetical ambitions, the IAEA has repeatedly noted “that the Agency has not detected the actual use of nuclear material in connection with the alleged studies.”

Pelley’s weird comment about “the Iranians…abandoning their nuclear weapon,” literally makes no sense considering that the United States intelligence community and its allies have long assessed that Iran is not and never has been in possession of nuclear weapons, is not building nuclear weapons, and its leadership has not made any decision to build nuclear weapons.

Beyond this, though, the “one concrete step” Kerry suggests to Pelley that Iran might do to signal its transparency and good intentions is something Iran is already doing.

Kerry states that Iran “could immediately open up inspection of the Fordow facility, a secret facility and underground in the mountains,” yet the enrichment facility at Fordow is already open to intrusive IAEA inspections and has been since being declared to the agency by Iran itself in September 2009.

The site was announced by Iran to the IAEA on September 21, 2009, well in advance of the 180 days before becoming operational as required by Iran’s Safeguards Agreement. At the time, the facility was still under construction and did not actually begin uranium enrichment until early January 2012, roughly 840 days after it had been declared to the IAEA. The facility was subsequently described as “a hole in a mountain” and “nothing to be worried about” by then-IAEA Secretary General Mohammed ElBaradei.

When the plant began operation, IAEA spokesman Gill Tudor confirmed to the press that “all nuclear material in the facility remains under the agency’s containment and surveillance.” To date, this continues to be true.

Furthermore, Iran has never refused IAEA inspectors admission to any of its safeguarded nuclear sites. All sites and facilities are under video surveillance, readily accessible to IAEA inspectors, open to routine inspection, and subject to material seals application by the agency. In addition to the two regular inspections all of Iran’s enrichment facilities are subject to each and every month, “two unannounced inspections are conducted every month at Fordow,” according to the London-based International Institute for Strategic Studies (IISS).

So, when Pelley suggests—and Kerry concurs—that Iran should “throw the doors open” to Fordow as a sign of good faith and legal obligation, they reveal their staggering ignorance of the facts on the ground.

uclear expert Mark Hibbs has explained on the Arms Control Wonkblog,”There are IAEA safeguards personnel in Iran 24/7/365,” pointing out that inspectors enter and examine enrichment sites like Fordow “frequently and routinely,” where they carry out “two kinds of inspections: ‘announced inspections’ and ‘short-notice announced inspections.'” The “announced inspections” are conducted with “24-hour notification” given to Iran, while “Iran’s subsidiary arrangements in fact permit the IAEA to conduct a short-notice inspection upon two hours’ notice.”

Former Iranian nuclear negotiator Seyed Hossein Mousavian, now a lecturer at Princeton University, has noted, “Since 2003, the International Atomic Energy Agency (IAEA) has implemented the most robust inspections in its history with more than 100 unannounced and over 4000 man-day inspections in Iran.” And in 2012 alone, IAEA investigators spent 1,356 calendar days in Iran, conducting 215 on-site inspections of the country’s 16 declared nuclear facilities, and spending more than 12% of the agency’s entire $127.8 million budget on intrusively monitoring the Iranian program, which fields only a single functional nuclear reactor that doesn’t even operate at full capacity.

Again, no diversion of nuclear material to a military program has ever—ever—beenfound.