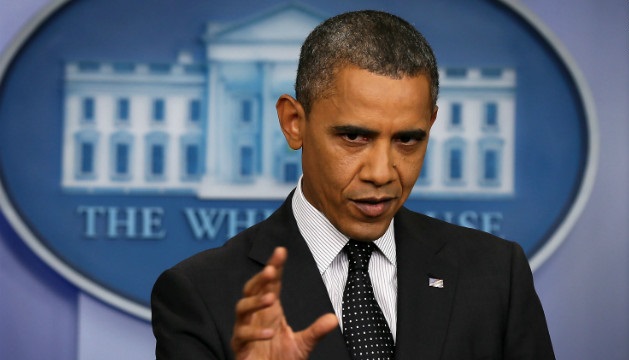 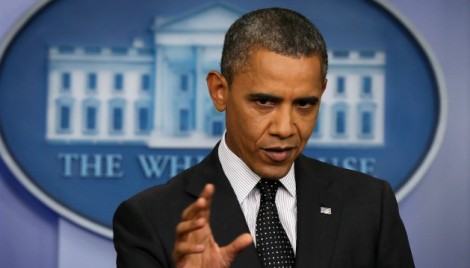 US President Barack Obama warned Syria against crossing a “red line” by using chemical weapons in a press briefing on August 20, 2012

In the last month, the U. S. government has reversed course on its intention to attack Syria and conveyed the impression that it wants to mitigate Washington’s long-term hostility toward Iran. Is a new era of peace and friendship emanating from the Obama Administration? Or is it, perhaps, a move to both spare President Obama a rejection of his war plans by Congress and to further U.S. global interests?

A few weeks ago, President Obama was determined to attack Syria over President Assad’s alleged order to his army to use outlawed chemical weapons against civilians in a suburb of Damascus. Both Syria and its Russian ally deny the regime ordered the attack, and, despite the UN report, there is no direct evidence that it did so. There certainly hasn’t been an explanation of why Assad — an individual who certainly clings to power — would undertake the one action that would provoke a U.S. attack.

Obama was so eager to send his cruise missiles into Syria he said he was “comfortable” not having approval from the UN, even though it would be illegal under international treaties to which the U.S. is a signatory. He said he had a right to commit an act of war against Syria without congressional approval. Secretary of State John Kerry, who actually seemed to be ranting at times, evidently provided the maximum evidence for attacking when he said President Assad “is like Hitler,” so bombs away — but it didn’t happen.

The unexpected occurred, removing the immediate threat of war when the Damascus regime agreed to give up its chemical weapons. Opposition forces were furious. They were counting on a U.S. bombardment to advance their struggle. Instead, inspectors from the Organization for the Prohibition of Chemical Weapons (OPCW) will oversee the destruction of Syria’s chemical arsenal.

Until recent days, the Obama Administration was regularly increasing its draconian economic sanctions on Iran unless the Teheran government ended its attempt to build nuclear weapons.

Now, Obama is trying to cultivate a less hostile, working relationship with newly elected President Hassan Rouhani that may in time lead to a reduction in tensions that have continued without interruption since the hostage crisis of 1979. Supreme Leader Ayatollah Ali Khamenei is obviously supporting Rouhani’s efforts.

In his first UN speech Rouhani said Iran was ready to enter talks regarding the nuclear question and emphasized Iran desired a reduction in tensions with the United States. He stated that Iran had a right to enrich uranium for peaceful purposes. He strongly repeated what Tehran has declared for years — that his country is not in the process of building a nuclear bomb.

The Oval Office sought to arrange a “chance” first meeting at the UN between the two presidents leading to a public handshake. Rouhani demurred; it was too early for that. Instead, Obama called the Iranian leader by arrangement Sept. 27 and conversed for 15 minutes about an improvement in relations and resolving to the nuclear imbroglio.

Some Iranians reportedly do not approve of the new president’s willingness to compromise with the U.S., not least because there hasn’t been a hint the sanctions will be removed. On Sept. 30, Gen. Mohammed Ali Jafari, a commander of Iranian Revolutionary Guards, said that Rouhani took a “firm and appropriate” position at the UN General Assembly, but should have refused the telephone call. Two days later, he received substantial support from parliament, when 230 members signed a statement of support for his efforts to improve relations with the U.S. and only 60 did not.

It is doubtful that the Obama Administration planned either of these big changes, especially the Syrian outcome. The White House may have intended an overture to the “moderate” Rouhani at some point but to do so while bombing or preparing to bomb Tehran’s principal Arab ally was impractical. The abrupt decision not to bomb Syria made a talk possible.

It is extremely doubtful the steps taken by the U.S. in the last few weeks have anything to do with a new era of peace and friendship. President Obama was intent on bombing Syria as a show of U.S. power. As we discuss below, he completely misjudged the views of the American people regarding a new war and found himself on the precipice of a humiliating defeat. He grasped an unexpected way out.

Although he has long advocated and still desires regime change in Syria, Obama did not intend to topple the Assad regime. This wasn’t for peaceful reasons. Over the last year he has come to recognize that his efforts to form a “moderate” front following U.S. orders have failed so far, and that the jihadist sector of the armed opposition has made huge advances in the last several months. If Assad fell now there’s no telling who would end up in power controlling the regime’s chemical weapons of mass destruction.

Toward Iran, the sanctions remain in place along with the threats. In a Sept. 30 meeting with Israeli Prime Minister Benjamin Netanyahu, Obama declared: “We take no options off the table, including military options.” This, of course, is a threat to use force, which the UN Charter prohibits as well as “uses” of force, not that the Charter seems to matter any more.

Netanyahu’s speech was that of a man who has learned nothing and forgotten nothing throughout his political career: “Israel will not allow Iran to get nuclear weapons,” he said. “If Israel is forced to stand alone, Israel will stand alone.” Standing alone, lest we forget, with 200 nuclear weapons, a huge chemical war inventory, and Washington inevitably coming to the rescue. The usually staid Inter-Press Service described Netanyahu’s diatribe as being “like the proverbial skunk at the garden party.” Incidentally, Israel belongs to neither the nuclear nor the chemical weapons treaties.

Obama has been seeking to bankrupt Iran over the question of nuclear weapons when he knows full well that a 2007 assessment by the Director of National Intelligence on behalf of all U.S. spy agencies reported that Iran had abandoned its nuclear weapons program years earlier — a finding reiterated in 2010 and applicable today. Actually Iran has several times sought reasonable solutions to the nuclear issue and improving relations but has been spurned. At the same time the Obama Administration has and continues to insist upon regime change in Damascus — without the jihadists —mainly because the Assad government is Iran’s main Arab ally.

The United States exercises virtual hegemony over nearly the entire Middle East. It does not want oil-rich Iran to remain an independent major power in the region that won’t bend its knee to Washington, especially if closer unity with neighboring Iraq is in its cards. America has sought regime change in Iran since its puppet, the vicious Shah of Iran, was overthrown in 1979. But it doesn’t want a war because much of the Middle East would blow up. Now it is attempting to increase its influence by taking advantage of what it considers a more suitable government in Tehran.

Washington’s long-range goals, of course, have not changed. Nor have Iran’s.

Obama’s only strategic contribution to U.S. foreign/military policy — the “pivot,” or “rebalancing” to Asia, announced with considerable fanfare a couple of years ago and reiterated last May — envisages toning down Washington’s obsession with the “global war on terrorism” and reducing America’s military commitment to the Middle East.

Containing China remains Washington’s most important geostrategic objective. This includes strengthening the military encirclement of China, developing stronger ties with nations in the region which would rather ally with Washington than Beijing, and forming a free trade association of nations in the Asia/Pacific sector known as the Trans-Pacific Partnership (TPP) that the U.S., naturally, would dominate.

The White House, however, is more unbalanced than ever in the Middle East/North Africa theater. The administration’s hegemonic foreign/military policy is attempting to simultaneously manipulate events in Syria, Iran, Israel-Palestine, Afghanistan, western Pakistan, Yemen, Libya, Somalia, the recent fighting in Mali and the terror bombing in Kenya, not to mention the unexpected growth of al-Qaeda affiliates in the region.