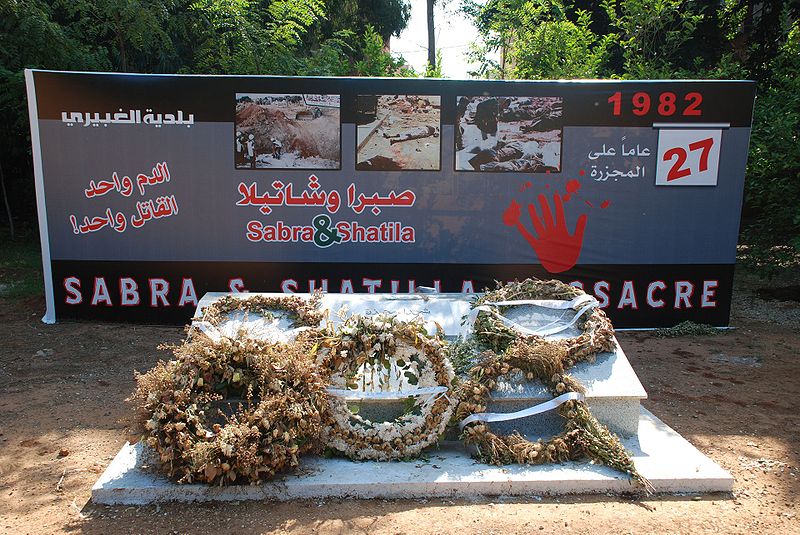 Mr. Sharon declared: “If you don’t want the Lebanese to kill them, we will kill them.”

Mr. Draper then caught himself, and backtracked. He reminded the Israelis that the United States had painstakingly facilitated the P.L.O. exit from Beirut “so it wouldn’t be necessary for you to come in.” He added, “You should have stayed out.” Mr. Sharon exploded again: “When it comes to our security, we have never asked. We will never ask. When it comes to existence and security, it is our own responsibility and we will never give it to anybody to decide for us.” The meeting ended with an agreement to coordinate withdrawal plans after Rosh Hashanah (“head of the year”) and the Israelis rushed from the meeting to begin its (the new year’s) celebration.

An American Congressman noted at the time the cynical irony of  the Begin government allowing forty eight more hours of slaughtering Palestinians during the Rosh Hashanah two-day celebration, which  many believe to be the anniversary of the creation of Adam and Eve and their first actions toward the realization of mankind’s role in God’s world.

By allowing the argument to proceed on Mr. Sharon’s terms, Mr. Draper failed in his duty to his fellow Americans and effectively gave Israel cover to let the Phalange fighters remain in the camps. Years later, Mr. Draper called the massacre “obscene.” Just as, no doubt, in the future ex-US officials and former Members of Congress will call the Zionist occupation of Palestine “obscene.”

Draper, in an oral history recorded in 2002, recalled telling Sharon: “You should be ashamed. The situation is absolutely appalling. They’re killing children! You have the field completely under your control and are therefore responsible for that area.”  Yet the transcript of Mr. Draper’s meeting with the Israelis demonstrates how the United States was unwittingly complicit in the slaughter at Sabra and Shatila.

Ambassador Lewis, now retired, told Mr. Anziska that the massacre would have been hard to prevent “unless Reagan had picked up the phone and called Begin and read him the riot act even more clearly than he already did in August — that might have stopped it temporarily.” But “Sharon would have found some other way” for the militiamen to take action, Mr. Lewis added. Nicholas A. Veliotes, then the assistant secretary of state for Near Eastern affairs, agreed saying that the killing frenzy was “Vintage Sharon,” adding, “It is his way or the highway.”

On Sept. 18, 1982 Reagan pronounced his “outrage and revulsion over the murders.” He said the United States had opposed Israel’s invasion of Beirut, both because “we believed it wrong in principle and for fear that it would provoke further fighting.” Secretary of State George P. Shultz later admitted that “we are partially responsible” because “we took the Israelis and the Lebanese at their word.” He summoned Israeli Ambassador Arens. “When you take military control over a city, you’re responsible for what happens,” he told him. “Now we have a massacre.”

Belated expressions of shock and dismay do nothing for the nearly 3,000 butchered or their survivors gathering this week at Shatila camp.  And they belie the Americans’ failed diplomatic effort during the massacre. The transcript of Mr. Draper’s meeting with the Israelis demonstrates how the United States was unwittingly complicit in the tragedy of Sabra and Shatila.

The Sabra and Shatila massacre severely undercut respect for America and its influence in the Middle East as well as its moral authority. In the aftermath of the crime the US felt compelled by “guilt” to redeploy the “peacekeeper Marines”, who joined the anti-Muslim side in the midst of a brutal civil war and themselves killed countless civilians.

The partially revealed archival record illustrates the magnitude of deception that undermined American efforts to avoid bloodshed. Working with only partial knowledge of the reality on the ground, the US feebly yielded to false arguments and stalling tactics, thus allowing a massacre that was already in progress to proceed.

The White House, the UN Security Council, and the global community must join the above noted citizen initiatives for belated justice for the victims of this Israeli-organized massacre by demanding the release of all the Israeli records pertaining to the incident.  American law, including The US Foreign Assistance Act enacted September 4, 1961, mandates, inter alia,  that no assistance will be provided to a government which “engages in a consistent pattern of gross violations of internationally recognized human rights including torture or cruel, inhuman, or degrading treatment or punishment, prolonged detention without charges, causing the disappearance of persons by the abduction and clandestine detention of those persons, or other flagrant denial of the right to life, liberty, and the security of person…”  The law stipulates a cutoff of all American aid pending full compliance.

And so the quest for justice for the victims of the 1982 Massacre at Sabra-Shatila endures.  It gathers steam. It grows. As do the demands for full accountability for manifold other crimes perpetrated by the Zionist regime still occupying Palestine.