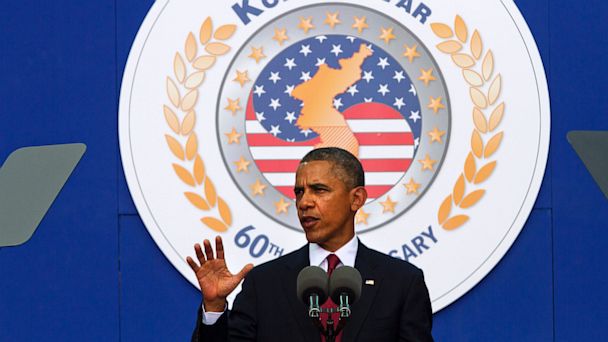 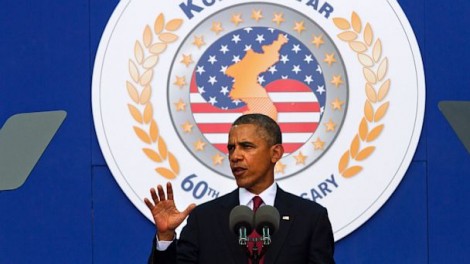 There are times when the Obama Administration’s deep attachment to U.S. militarism and excessive praise of the armed forces causes the White House to seem either out of touch with reality or intentionally dishonest in its praise of America’s past wars.

Commander in Chief Barack Obama’s latest exaggeration of American military prowess took place in Washington, D.C., on July 27 at an outdoor commemoration of the 60th anniversary of the armistice that temporarily halted hostilities in the 1950-53 Korean War.

“Here, today,” he told a cheering crowd of elderly U.S. and South Korean veterans, “we can say with confidence that this war was no tie. Korea was a victory!”

The Korean War, of course, was at best a stalemate for the U.S. It was decidedly not a victory, at least until President Obama, using the rhetorical skills of alchemy, in effect transmuted the lead of stalemate into the gold of victory.

Given the Pentagon’s incredible destructive power, it has not been a big winner since the end of WWII. Korea was a stalemate. Vietnam (1961-1973) was a humiliating defeat. The 12-year (and counting) U.S. war in Afghanistan against a relatively weak foe with scant weapons is clearly a stalemate. The seven-year Iraq war that began in 2003 against a small, sanctions-wrecked country without heavy armaments was another stalemate. None of these wars, which cost the taxpayers many trillions, was declared by Congress, as the U.S. Constitution stipulates.

A total of 36,574 U.S. soldiers were killed and 103,284 were wounded during the Korean War. Several million Koreans, from north and south, died, including large numbers of civilians. U.S. planes carpet bombed major swaths of North Korea. They destroyed Pyongyang, the capital, where only one building of two stories was left standing. China lost an estimated 180,000 soldiers defending North Korea in what Beijing termed the War to Resist Aggression and Aid Korea.

The reason that an armistice is observed instead of a peace treaty is that neither the U.S. nor South Korea will sign a treaty with the Democratic Peoples Republic of [North] Korea. This means a state of war still exists but hostilities have temporarily stopped until war resumes.

North Korea has been insisting on a peace treaty ever since the armistice was signed in 1953. The absence of a peace treaty, the stationing of at least 28,000 U.S. troops in the south for six decades, and Washington’s refusal to directly negotiate with Pyongyang is a main reason for the continuing tensions on the Korean Peninsula.

If President Obama can so easily transform stalemate into victory, what harm will come from converting an armistice into a peace treaty?