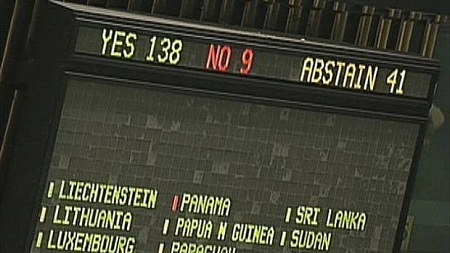 And it is doubtful that key Obama administration officials have changed their minds this week given Ms. Bensouda’s impassioned invitation on June 27 to Palestine, urging its accession to the Rome Statute and the ICC, the former as of this month signed and ratified by 122 states, with 31 additional countries, including Russia, having signed with ratification pending in their legislatures.

Visiting Al Jalil UNWRA high school across from Shatila camp here in Beirut recently, this observer was asked several questions by students and staff and the most frequent inquiry, which came as no surprise,  concerned why the Lebanese government, even those who claim to support the Palestinian cause, still have not acted in Parliament to grant Palestinian refugees the same elementary civil right to work and to own a home that every refugee everywhere, even in Zionist occupied Palestine, have long enjoyed.

The second most commonly asked question did surprise me a bit, which was why the Palestinian leaders in Ramallah have not joined the International Criminal Court (ICC) in order to challenge the criminal, apartheid regime in occupied Tel Aviv and hold it accountable under international humanitarian law for crimes against Palestinian prisoners and more than a dozen equally brutal campaigns that target the indigenous population increasingly being condemned internationally.

From my time visiting Al Jalil School, it became clear that the students and faculty want their country, Palestine, to join the ICC.  One is advised that this sentiment is the same in all 54 Palestinian refugees’ schools in Lebanon, and this insistence mirrors virtually all Palestinian camps, groups, and NGOs with whom I have discussed the subject.

The new ICC Prosecutor, Bensouda, is also encouraging Palestine  to join the International Criminal Court, as she prepares for the cases that are likely to be filed with the ICC in the coming months.   Addressing this week’s Transitional Justice and International Justice the Arab World conference, she declared that her office believes Palestine qualifies to join the ICC after the UN General Assembly voted to admit Palestine as a non-member state last November.

The ICC prosecutor’s office is rumored in The Hague to be particularly impassioned and focused on those areas in which their chief, Ms. Bensouda, has particular international legal expertise. With the main area being international crimes comprising the category of continuous crimes against humanity, which, arguably, since 1948, have been most egregiously committed by the last 19th century colonial enterprise that still brutally occupies Palestine.

Prosecutor Bensouda and her ICC staff is reported to be particularly intent on investigating continuing violations of basic humanitarian principles, standards and rules and both have spoken about the case  of Palestinian Maysara Abu Hamdiyeh, a cancer-sufferer who died in Israeli custody on June 25 after the  Israeli government rejected repeated international calls and protests for his release. This, even as its officials conceded that Mr. Abu Hamidiyeh was no threat to society and could likely be successfully treated if allowed medical treatment for his life-threatening condition.  One ICC investigator, who asked for anonymity, stated that she and her colleagues considered the actions of the Netanyahu government with respect to the Abu Hamidiyeh, and similar cases, to be “sick!”

The White House and its allies are not pleased by prospects for an eventful next few years at the ICC. What have particularly unnerved outgoing UN Ambassador Susan Rice and Israeli PM Netanyahu are the May23 comments of Ms. Bensouda during the 38th FIDH Congress in Istanbul, which celebrated the 15th anniversary of the Rome Statute that created the ICC.

“Gone are the days when those who commit international crimes could be cleansed of their atrocities through a mere hand shake and a scribble of their initials on a piece of paper which purports to bind them to conditions that they have no intention of ever observing.”  She added: “My challenge is to consolidate what has been achieved, to build on from it, and to answer victims’ calls for justice. That is the promise made in Rome and that is the promise we cannot fail to fulfill.”

One the several “going out the door” comments Ms. Rice made on cleaning out her UN office on her way to become President Obama’s National Security Adviser was basically a reiteration of her livid expressions made following last fall’s UN General Assembly vote giving Palestine its new international status. When asked if she considered the UN vote a repudiation of the Obama administration and her personally, Ms. Rice scolded:

It may be recalled that in a letter addressed to the Secretary-General of the United Nations and the President of the UN Security Council immediately following the November 29, 2012 General Assembly vote, the permanent UN observer of Palestine reiterated his delegation’s position that “all Israeli settlement activities are illegal, constituting grave breaches of article 49 (6) of the Fourth Geneva Convention and thus constituting war crimes, as further determined in accordance with article 8 (2) (b) (viii) of the Rome Statute of the International Criminal Court. Israel, the occupying Power, must be held accountable for all of the war crimes it is committing against the Palestinian people.”

This letter was cited by the most recent UN Human Rights Council (UNHRC) report of February 2013, which also found Israel, as an occupying power, in violation of Article 49 of the Fourth Geneva Convention for ”transferring parts of its civilian population into territory that it occupies.”

Adding to all its currents problems, is this week’s announcement that President Obama’s “favorite general,” retired Gen. James “Hoss” Cartwright will likely cause yet more serious problems for the administration when details of his suspected leaks of information about a covert U.S.-Israeli cyber-attack on the Islamic Republic of Iran’s nuclear program, for which he is expected to soon be arrested and indicted. Coming on the heels of the Edward Snowden’s NSA leaks case, Washington is said to have no patience whatsoever for Palestine making more problems and opening an ICC Pandora’s box.

Ramallah is being flooded with threats this month from Middle East envoy Tony Blair, US Secretary of State John Kerry (now on his 5th visit to the Middle East in as many months), Jordan’s King Abdullah II, and reportedly several others.  The message for Mahmoud Abbas is that the Palestinian Authority risks a cut-off of funds and US disengagement from any “peace process” as well as the scrapping of the rumored “mega economic and development  package” which Kerry aids are currently finalizing, if Palestine goes anywhere near the International Criminal Court.

It’s a tough call for President Mahmoud Abbas and his supporters because Hamas wants Palestine to immediately file cases against Israel at the ICC and so it appears, do a large majority of Palestinians, in Lebanon and internationally.