The Politics in Name: ‘Myanmar’ versus ‘Burma’ 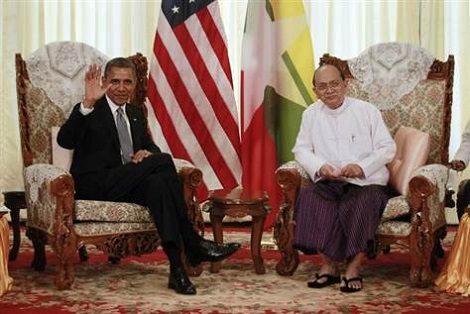 The three-day long 22nd World Economic Forum for East Asia concluded on June 7 in Nay Pyi Taw. It was the first time Myanmar hosted an international gathering of such magnitude. The event was attended by around 900 participants from over 50 countries, including political and business leaders.

Though the objective of the forum was to discuss the issues facing developing economies in the region, particularly economic integration of the Association of Southeast Asian Nations, a great interest in the socio-economic reforms of the host country was quite evident.

On the sidelines of the forum, a globally televised debate titled “Myanmar: What Future?” was moderated by Nik Gowing of the British Broadcasting Corporation, with about 400 people in attendance. The panelists included Aung San Suu Kyi, leader of the opposition party, U Soe Thein, minister of the President’s Office, and Zin Mar Aung, ex-political prisoner and activist.

Evidently, the debate was divided on the very name of the country. Though they all refer to the same country, some used Burma and others used Myanmar. For example, the moderator, Aung San Suu Kyi, and Zin Mar Aung unequivocally preferred the former, while Minister Soe Thein and majority questioners from the audience used the latter.

Does name matter in Myanmar politics? Is there any significance of using one over the other? And why does this issue still linger after thirteen years since it was renamed in 1989?

First of all, the issue is historical as well as political. The controversy surrounding the name started with the political circumstances under which it was renamed. It was the State Law and Order Restoration Council military government which renamed the country from Union of Burma to Union of Myanmar. Similarly, the name of the capital city was changed from Rangoon to Yangon.

During the British rule, the name of the country was Burma, and the capital was Rangoon. At the 1947 Panglong conference, and in the preceding months, the majority Burman group led by General Aung San made several attempts to convince the Frontier people, who are today designated as the country’s ethnic minorities, to join the Union.

Since the British colonial administration, there has been deep mistrust toward the majority Burman group by other ethnic nationalities. It was under such circumstance that the term Union of Burma was coined in an attempt to give a sense of unity and belongingness to the diverse ethnic groups under a new independent Burma.

Had not the Frontier people agreed to join the Union of Burma, the country’s independence could have been either delayed or only territories occupied by the Burman ethnic group may have been recognized as Burma by the British.

There are two basic arguments about the name change. First, the military leaders argue that as the name Burma was given or used by the colonial rulers, it is necessary and important to replace it with an indigenous name. It also implies that using a different name symbolizes freedom from the legacy of colonial administration.

The second argument is that the term Burma refers to only one group of people and the usage of Myanmar is inclusive of all ethnic nationalities of the country.

Though the name had been changed in 1989, the people of Myanmar and the international community continue to use two different names. For example, the overwhelming democracy activists and some Western countries, particularly the United States and the United Kingdom, continue to use the old name.

On the other hand, the Myanmar government and its supporters and sympathizers, and a vast majority of the international community, including the United Nations Organization, use the new name.

For those who prefer Burma, they argue that it was an undemocratic government (military regime) which changed the country name without the consent or mandate of the people.

They also argue that there is no fundamental difference between the two names, as both still refer to one group of people. To them, the name change should only happen if a democratically elected government decides to do so with majority approval in the parliament. They also argue that the term Burma is easier to pronounce and remember.

However, with the gradual democratic reforms in the country, the new name has become more popular than ever before and the international community has gradually recognized it.

If the current pattern of democratic transition continues and the international community establishes normal diplomatic relationship with the country, it is likely that the new name will eventually be used for all official diplomatic dealings, including by the United States and the United Kingdom.

Nevertheless, the old name may not easily be forgotten or abandoned by some in Myanmar society, especially among the older generation and within the expatriate community. Until a democratically elected government officially mandates and recognizes the name change permanently, the country’s old name will still linger in Myanmar politics in the foreseeable future.

Since the issue is historical as well as political, the usage of one name over the other still carries political significance, although both names basically refer to one particular group of people.