Pakistan: Will Nawaz Sharif Be The Hero The Country Needs? 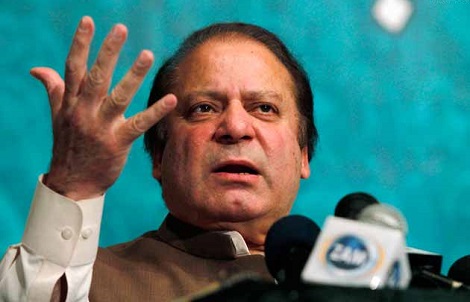 Back in May, Pakistan went to the polls and elected members of the National Assembly and Provincial Assemblies. Nawaz Sharif’s party, the PML-N, secured a comprehensive victory in the elections.

Thus, the 63-year old steel magnate, Sharif, was recently sworn in as Pakistan’s Prime Minister for the third time in his political career, which spans over three decades. In his address, among other things, Sharif talked about drone bombings and terrorism. Obviously, in a country that has seen numerous casualties and a good deal of collateral damage owing to Washington’s involvement in Afghanistan, it only makes sense for the Prime Minister to oppose drone bombings. But the challenge that lies for Nawaz Sharif is much greater than mere words.

To begin with, the apparently never-ending war in Afghanistan has caused enough damage to set into motion the notions of terrorism and extremism all throughout Pakistan’s tribal areas. Blame whoever you want—the US for its unfair wars, the Afghans for their, let us say (for lack of a better word) not-so-rational attitude, or the Pakistani tribal folks themselves for being in the wrong place at the wrong time—at the end of the day, drones kill people, and the Pakistanis too, just like any other nation, do not like being killed. The fact that Nawaz Sharif got an overwhelming majority and the voter turnout in the elections was well over 60% further shows that the Pakistani masses crave for a change—not necessarily the change Obama keeps promising; albeit a change where drones do not act as substitutes for alarm clocks and wake people up.

Coming back to the elections. Prior to the polls, almost every major pundit out there predicted a hung government or split verdict for Pakistan. After all, the country has had its share of weak democratic traditions, and the ethnic diversity in Pakistan is enough to create multiple regional parties. Apparently, PML-N’s victory has proven all of that wrong.

Come to think of it, the results are not that astonishing either. Even though the initial surveys were showing a visible favor towards Imran Khan’s PTI, PML-N defied the odds. More than half of Pakistani voters dwell in rural areas that are dominated by headmen and chiefs, and like it or not, such headmen and chiefs are at better terms with the much older and more experienced PML-N than the relatively newer PTI. Anyway, if you are looking for a more sombre explanation, the fact that the country is marred by frequent power outages and acute electricity shortage also played a role in Sharif’s success; Imran Khan promised change, but Nawaz Sharif promised electricity, and when it comes to power crisis, rhetorical promises of change fall flat.

The question that now arises is: what next? Terrorism and power outages are not the only challenges before Sharif’s government. Sluggish economic growth, ever increasing unemployment, rampant corruption, and the energy crisis are just few of the many problems that Pakistan is currently facing. Add to it the fact that Pakistan has had a history of shaky democratic governments, and the Prime Minister’s post surely seems like a crown of thorns. Furthermore, Sharif’s own previous track record does not speak highly of him. This is his third tenure as the PM, and the earlier two terms were marked by cases of corruption and instability all around Pakistan. Intimidating judges, threatening officials, carrying out nuclear tests while the country suffers from poverty—you name it! PML-N’s earlier outings as the party in power have not be promising, to say the least. Oh, while we are at it, let us not forget cases of nepotism. For the record, almost one-half of Sharif’s household and relatives enjoyed political positions in his last run at the office, and it goes without saying that hardly any of them enjoyed affection of the masses.

However, every cloud has a silver lining, and right now, Sharif also seems to enjoy the respect of his rivals, coupled with the new democratic zeal that Pakistan is experiencing of late. Add to it the fact that Sharif currently enjoys a rather impressive majority in the Assembly, and you have every ingredient for a stable and successful government. Furthermore, it is also interesting to note that it was Nawaz Sharif who played a key role in the establishment of the Environmental Protection Agency in 1997.

As of now, it makes little sense to expect miracles. There is nationwide consensus in Pakistan that the erstwhile PPP government did little to uplift the country from its sorry state. Instead, cases of corruption and NATO appeasement proved to be the nail in its coffin. The best thing for Pakistan is to expect that a comparatively less corrupt Sharif will provide a better government than the PPP.

In terms of agenda, Sharif has talked a great deal: better ties with India, curbing terrorism and extremism, pursuing economic growth and solution to the energy crisis, as well as regional peace in South Asia. Ah… the utopia!

The last few years have been tough for Pakistan; so tough, that it can be argued that Pakistan’s hopes of becoming a regional hegemon seem to be fading away. Pursuing a friendly policy towards India is, thus, an obvious choice for Sharif. Similarly, staying aloof from extremists is no longer a luxury but a compulsion for any democratic government in Pakistan. Corruption and energy crisis are not issues that can be solved overnight—and assuming that Pakistan continues to struggle under the clutches of corruption, having a peaceful neighborhood may provide it the economic boost it needs (the Iran-Pakistan-India gas pipeline, for instance, can serve as an apt example of economic growth stemming out of regional co-operation).

Pakistan has served as a key player in the region for the past six decades, primarily due to its location and also due to its rather decent and interestingly cordial ties with mutually suspicious nations (China, USA, Russia, Central Asia and Middle East). Nawaz Sharif, as a result, has a great responsibility of bringing peace to Pakistan in particular and South Asia in general, and also countering extremism whilst saving democratic institutions in the country. Whether or not Sharif succeeds with his responsibilities is a question that only time can answer. For Pakistan’s and South Asia’s sake, let us pray he does.