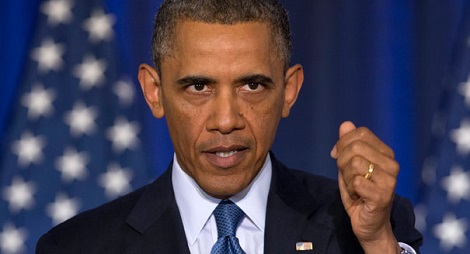 More than a decade ago, Osama bin Laden appeared in a brief video to speak about several issues. One of them was to advise the Islamic world that they should expect the U.S. military to be defeated by Islam, the Taliban, and its allies in Afghanistan. The other was to suggest that Muslims should be prepared to watch the U.S. government strangle the civil liberties of Americans in the name of prosecuting its war against the Islamist mujahedin.

A dozen years on, the late-al-Qaeda chief’s first prediction has come true. The U.S. military is leaving Afghanistan after an utter defeat inflicted on it by America’s two most lethal enemies, the Islamist Mujahedin and Barack Obama’s administration.

And in the last week, we have learned that the bin Laden’s second prediction has come to pass in the Obama administration’s expansion of a Bush-era program to collect electronic information on U.S. citizens who are entirely unrelated to the war against the Islamists. The Obama-expanded program authorizes the National Security Agency (NSA) to collect, exploit, and store in databases all the electronic communications of all Americans. The administration’s defense of the NSA program is that this comprehensive collection effort against U.S. citizens stopped one terrorist attack; namely, that of Najibullah Zazi against the New York subway system. The media already have begun to chip away at this claim, noting that publicly available data shows the British and/or the Pakistanis intelligence services appear to have first brought Zazi to the attention of U.S. authorities.

Apparently realizing that the Zazi example might be a weak reed to lean on, Obama‘s Director of National Intelligence, General James Clapper, is telling the media about the “grievous harm” the leak of the ongoing NSA program has done to U.S. security. Clapper clearly is hoping to stoke the patriotism of Americans and win their support for the witch hunt to identify the leakers that NSA started by asking the FBI to conduct a criminal investigation. Using this tack, Clapper, NSA, Obama, the judges, and the senators and congressman of both parties who approved the collection operation are hoping to distract Americans from their intentional shredding of the 4th Amendment, as well as the last bits of trust Americans had in the federal government.

My own view is that Americans ought not to fall for this diversionary effort. Despite Clapper’s tearful whining about the terrible blow the leak has and will deliver to U.S. national security, he is being intentionally deceitful. He is playing to the stereotype most Americans hold of the mujahedin as men who are uneducated, medieval lunatics out to indiscriminately kill all Americans and destroy all of modernity. This, of course, is another sadly effective lie that has long been preached to Americans by both parties. That the Islamists view Western society and lifestyles as libertine and pagan is undeniable, but their skills in the use of such tools of modernity as weapons, communications gear, computers, the Internet, etc. are first rate –ask the U.S. generals defeated by them and Obama in Iraq and Afghanistan. The one place where there will be no surprise that the Obama administration is collecting all of the electronic communications of 309 million Americans is in the headquarters of al-Qaeda and its allies. They assumed that reality long ago, and have tried to adapt their communications security to respond to the challenge.

If Americans are surprised by Obama’s deliberate attack on the Constitution, they have only themselves to blame. From his first months in office, Barack Obama has consistently demonstrated his contempt for Americans and their Constitution, as well as an intention to have his administration — and especially Attorney General Holder’s Justice Department — treat them in a lying and lawless manner. For example:

This partial summary of the Obama administration’s lawlessness is deeply troubling, but pales in comparison to the Obama-authorized expansion of the NSA collection operation exposed last week. That operation strikes at the very heart of what the Founders believed was essential for the survival of our Republic; namely, Americans’ trust in and affection for their federal government. From here on out, not one American can be sure:

The foregoing are just the reaction of this non-lawyer to what seems to me to be the most fierce, varied, damaging, and prolonged attack on the U.S. Constitution that I have seen in my lifetime. Those smarter in the law and more politically savvy, I am sure, will try to find a brilliantly deceitful way to disguise the Obama administration’s well-documented authoritarian bent and actions, but I am not sure Americans are going to buy it this time.

What Americans will do about the attack on their Constitution it is another story. Impeachment and conviction of those elected officials — Democrat and Republican — and the judges who authorized, expanded, or condoned the all-inclusive NSA collection program seem absolutely necessary, as does the firing of those senior bureaucrats and military officers in the Intelligence Community, Department of Homeland Security, Department of Defense, and Department of Justice who designed the operation. Is this is enough to restore Americans’ trust in and affection for their federal government? Well, I guess we will have to wait and see. One thing does seem clear, however, and that is a failure to remove those responsible for deliberately violating the 4th Amendment would draw some very ominous battle lines in American society.