Hezbollah and the Syrian Pit 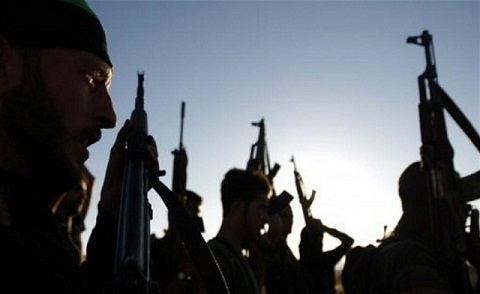 Homs Province, SYRIA — During a tour of some of the neighborhoods in Homs, Syria’s third largest city after Aleppo and Damascus, with a pre-conflict population of approximately 800,000 (nearly half of Homs’s residents have fled over the past two years) located maybe about 22 miles northeast of the current hot spot of al-Qusayr, this observer engaged is a few interesting conversations, or more accurately labeled diatribes, with some long-bearded Sunni fundamentalists who claimed they came from Jabhat al Nusra, a.k.a Jabhat an-Nuṣrah li-Ahl ash-Shām, (“Front of Defense for the People of Greater Syria”), and were preparing to return to al Qusayr to fight “the deniers of Allah”!

It is whoever controls the strategic crossroads town of al-Qusayr and its environs that can block supplies and reinforcements to and from Damascus and locations north and east.  For those seeking the ouster of Syria’s government, including NATO countries led by Washington,  were their “allies”  to lose  control of al-Qusayr, it would mean the cutting off of supplies from along the Lebanese border, from which most of the local opposition’s weapons flow and fighters have been smuggled over the past 26 months. If the Assad regime forces regain control of the city, Washington believes they will move north and conquer current opposition positions in Homs and Rastan, both areas being dependent on support from Lebanon and al-Qusayr. Some analysts are saying with perhaps a bit of hyperbole that as al-Qusayr goes, so goes Syria and the National Lebanese Resistance, led by Hezbollah.

If government forces can retake the city, it will  put an end to the  Saudi-Qatari green light, in exchange for controlling al-Qusayr, of the setting up a Salafist emirate in the area which would constitute a threat to the nearly two dozen Shia Lebanese inhabited villages of the Hermel region. If the Syrian army re-takes al-Qusayr, it would also avoid the likelihood of a full-fledged sectarian war on both sides of the border.

Meeting with a few self-proclaimed al Nusra Front militiaman last week, in Homs, one who spoke excellent British English they had plenty to say  to this observer about current events in al Qusayr to which they planned to return the next day to fight enemies “by all means Allah gives us”.  One added, when asked if they had confronted Hezbollah: “Of course but Hezbollah can’t defeat us. Eventually they will withdraw from Syria on orders from Tehran.  But first, enshallah, we will bleed Hezbollah with thousands of cut throats”, he boasted raucously as nearby kids  cheered and gave “V” for victory signs, smiles, giggles, and cackling all around.

Such jihadist rants are music to more than a few US congressional and White House ears these days, as once more in this region,  a major US-Israeli carefully calibrated regime change project,  appears to be falling short.

This week, the US Senate Foreign Relations Committee voted overwhelmingly to arm elements of the Syrian opposition with a recommendation to “provide defense articles, defense services, and military training” directly to the opposition throughout Syria, who naturally, will “have been properly and fully vetted and share common values and interests with the United States”.  History teaches that the vetting part would not happen if the scheme is implemented, despite only a few in Congress objecting.

Although perhaps lacking some of his father Ron Paul’s insights into US hegemonic plans for this region, Senator Rand Paul did object to the measure and he fumed at his colleagues, “This is an important moment. You will be funding, today, the allies of al Qaeda. It’s an irony you cannot overcome.”

According to the Hill Rag weekly, veteran war-hawks Senators John McCain and Lindsay Graham flashed a knowing smile but gave no rebuttal, perhaps realizing that Senator Paul is a bit untutored on the reality of current Obama Administration policy in Syria generally, and for al-Qusayr, in particular.

Contrary to the shock and anger expressed by Senator Paul, American policy in Syria is to de facto  assist allies of al Qaeda including the US  “Terrorist-listed”  Al-Nusra Front as well as anti-Iran, anti-Shia, and anti-Hezbollah groups gathering near al-Qusayr. These groups currently include, but are not limited to:  Ahl al-Athr Brigade, Ahrar al-Sham,  Basha’ir al-Nasr Brigades, Commandos Brigades, Fajr al-Islam Brigades, Independent Farouq Brigades, Khalid bin al-Waleed Brigade, Liwa al-Haq, Liwa al-Sadiq, Al-Nour Brigade, Al-Qusayr Brigade, Suqur al-Fatah, Al-Wadi Brigades, Al-Waleed Brigades and the 77th Brigade among the scores  of other Jihadist cells currently operating in, near, or rushing to, al-Qusayr.

Their victory, according to US Senate sources, would be a severe blow and challenge to Iran’s rising influence in the region and leadership of the increasing regional and global resistance to the Zionist occupiers of Palestine in favor of the full right to return of every ethnically cleansed Palestinian refugee.

While Congress was considering what else to do to help the “rebels”, on May 22,  no fewer than 11 so-called “world powers” foreign ministers, including from Turkey and Jordan, met in Amman to condemn—with straight faces, even, tongues in cheek—the “flagrant intervention” in Syria by Hezbollah and Iranian fighters.”  They urged their immediate withdrawal from the war-torn country. In a joint statement, the “Friends of Syria” group called “for the immediate withdrawal of Hezbollah and Iranian fighters, and other regime allied foreign fighters from Syrian territory.”

Not one peep, of course, about the Salafist-Jihadist-Takfuri fighters from more than 30 countries now ravaging Syria’s population. The truth of the matter is that the governments represented by their foreign ministers this week in Amman, will follow the US lead which means they will assist, despite some cautionary public words, virtually any ally of al-Qaeda whose fighting in Syria may be seen as weakening the Assad government and its supporters in Iran and Lebanon.

According to one long-term Congressional aide to a prominent Democratic Senator from the West Coast, while the Amman gathering described Hezbollah’s armed presence in Syria as “a threat to regional stability”, the White House could not be more pleased that Hezbollah is in al-Qusayr.”  When pressed via email for elaboration, the Middle East specialist offered the view that the White House agrees with Israel that al-Qusayr may become Hezbollah’s Dien Bein Phu and the Syrian conflict could well turn into Iran’s “Vietnam”. Quite a few folks around Capitol Hill think al-Qusayr will remove Hezbollah from the list of current threats to Israel.  And the longer they keep themselves bogged down in quicksand over there, the better for Washington and Tel Aviv. Hopefully, they will remain in al-Qusayr for a long hot summer and gut their ranks in South Lebanon via battle field attrition and Israel can make its move and administer a coup de grace.”

The staffer followed up with another email with only one short sentence and a smiley face:

“Of course the White House and its concrete wall-solid ally might be wrong!”

The dangers for Hezbollah are obvious – that it may be drawn ever deeper into a bottomless pit of conflict in Syria that could leave it severely depleted and prey to a hoped for death-blow from Israel.

Hezbollah Secretary-General Hassan Nasrallah and other party officials have dismissed that possibility.

The next few weeks may tell.