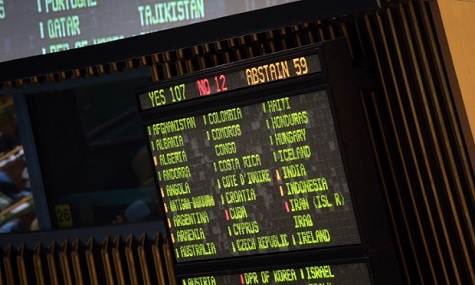 Homs, SYRIA — It’s not hard to find critics of the Assad government in the Governorate (Muhafazat) of Homs or, for that matter, to varying degrees in Syria’s other thirteen Governorates, according to Syrian analysts interviewed by this observer and reports from human rights groups including lawyers representing dissidents in Syria. However, after nearly 27 months of turmoil, the public opinion pendulum is markedly shifting back in support of the current regime.

One international political result was registered at the United Nations this past week when a US-Qatari-Saudi-drafted General Assembly Resolution, which was designed to increase pressure on the Assad government, stumbled badly and fell far short of what the Saudi Ambassador to the UN and other US allies predicted would be an overwhelming vote in favor.

Over the past four or five months, it has become increasingly clear that public opinion in Syria is shifting for reasons that include, but are not limited to, the following.

While inflation at the grocery stores in probably the most common complaint heard from a cross-section of society here, the population is adapting somewhat to higher prices and it appears to credit the government for efforts, some successful, to soften the impact of the illegal US-led sanctions that target this same Syrian population for purely political reasons to achieve regime change.

While Syrians demand dignity and freedom from oppressive security forces and an end to corruption, as all people do in this region and beyond, they are witnessing a return to near normalcy with respect to supplies of electricity, benzene, mazout fuel oil, bus schedules, schools, and a host of public services such as garbage collection, street sweeping, park maintenance, and sympathetic traffic cops who are rather understanding of short-cuts taken by drivers and pedestrians due to “the situation”.

In addition, public service announcement and even text messages demonstrate that the government is aware of the degree of suffering among the population, accept partial blame, and are focusing on remedial measures and, crucially, ending the crisis, with its horrific bloodshed. One observes here a definite trend of the pulling together of a high percentage of Syrians who share a very unique history and culture and who are deeply connected to their country and are increasingly repelled by the continuing killing from all sides, including the recent barbarisms of body mutilations and summary executions videotaped and broadcast on YouTube by jihadist elements—the latter of whom these days come from nearly three dozen countries, paid for and indoctrinated by enemies of Syria’s Arab nationalism and deep-rooted pillar of resistance to the occupation of Palestine.

In addition, many among Syria’s 23 million citizens, who initially supported the uprising following the government’s reaction to events in Deraa in March 2011, now have serious second thoughts about who exactly would replace the current government. Events in Syria are also making plain that the army is still loyal to the Assad government, and according to Jane’s Defense Weekly, is actually gaining experience and strength, as well as the well-known fact that as western diplomats are admitting that the “opposition militias” are hopelessly fractured and turning against one another, many essential mafia outfits, and beginning to resemble their fellow jihadists from Libya, Chechnya, and in between.

Opinion in Damascus and surrounding areas visited this past week confirms this observer’s experience the past five months of a sharp and fairly rapid shift in opinion that now strongly favors letting the Syrian people themselves decide, without outside interference, whether the Assad regime will stay, and indeed, whether the Baathist party will continue to represent majority opinion, not through wanton violence but rather via next June’s election. Many express confidence in the run-up to this critical vote, noting that the election will be closely monitored by the international community to assure fairness.

Perhaps aided by the current glorious May weather, a certain optimism, which was more scarce in the past, pervades many neighborhoods.

For different reasons, foreign powers, including the USA, Turkey, the European Union, the UK, Jordan, and even the majority population of the six Gulf Cooperation Council family-run countries, according to Pew Research, are shifting their earlier positions, which were based in part on those of the US administration, NATO, and Israeli assurances that the Assad government would surely fall quickly—“A matter of days, not weeks”, US President Obama promised. That was two years ago.

As noted above, this trend has accelerated since the UN General Assembly vote last week, which did not go as planned on the biased and politicized non-binding draft resolution on Syria.

The public reaction in Syria and across the Middle East is substantially that the “Friends of Syria” non-binding General Assembly resolution contradicts the reality on the ground, backs terrorism in Syria, and hinders the international efforts to help achieve a political solution to the crisis in this country. Only 107 states voted in favor of the resolution and 12 against, while 59 countries, mostly from Africa and Latin America, abstained from voting.

One reason the vote fell short of the 130 favorable votes that basically the same resolution garnered the past two times is that it is widely viewed as ignoring the crimes and atrocities committed by the armed jihadist groups in Syria and the flow of thousands of international terrorists backed by the West, the Gulf states, and Turkey, who provide them with weapons and money. According to the Russian delegate, backed by several other speakers, “the resolutions ignores all the terrorists’ heinous crimes and denounces what it called the escalation of the attacks by the Syrian government”. Afterward, one Latin American Permanent Representative told Inner City Press that the count would have been below 100 if not for some “last minute arm-twisting.” As it turned out, 15 countries didn’t vote at all, opting to “get coffee,” as one African Permanent Representative put it before the vote.

Syria’s permanent Envoy to the UN Bashar al-Jaafari said his country regretted the adoption of a biased and unbalanced UN resolution, thanking the countries that rejected the resolution “for their responsible positions which support the UN principles and the international law articles”. He noted that the decrease in the number of countries that voted in favor and the increase of numbers of those who abstained from voting indicates the growing international understanding of the reality of what is happening in Syria due to the foreign interference, support of terrorism, the spread of extremism and incitement, besides the refusal of dialogue.

“We rely on the UN and its member states to support Syria and its people against the culture of extremism and terrorism, and to encourage the comprehensive national dialogue to peacefully resolve the Syrian crisis,” he said. In a statement released after the vote on the UN draft resolution on Syria, al-Jaafari said that the French delegation had foiled the issuance of a number of UN press releases to condemn the terrorist acts committed by al-Qaeda-linked armed groups in Syria that have claimed the lives of thousands of Syrians and to condemn the assassination attempt against the Syrian Premier.

After Qatar’s ambassador spoke in favor of the resolution his country drafted (and re-drafted several times), Ja’afari revealed that there existed an e-mail from the representative of the Syrian opposition given to Syria’s embassy in Qatar showing Qatar’s involvement in the kidnapping of UN peacekeepers by the Yarmouk Martyrs Brigade. He read out a phone number from the e-mail as several Gulf diplomats grimaced or scowled, and three left the Chamber.

Visibly stunned, the UK Permanent Representative Lyall Grant called the whole matter “deeply confusing”. Another Permanent Representative, from a militia contributing country, said that if true, it’s “very problematic.” The reasons include the fact that UN Secretary General Ban Ki-moon had just thanked Qatar for its roles in the release of the UN peacekeepers, the earlier kidnapping of whom the Qatari government may have planned, paid for, and executed.

Meanwhile, Ban Ki-moon’s spokesperson Martin Nesirky said he would not disclose any more about the “negotiations to free the peacekeepers or who was behind the crime.”

Score a major diplomatic victory for Syria’s UN Ambassador al-Jaafari, as public opinion shifts in favor of the Assad government and both pressure as well as optimism build in the run-up to the Geneva II conference being organized by the White House and the Kremlin.