Israel, Hawking and the Pressing Question of Boycott 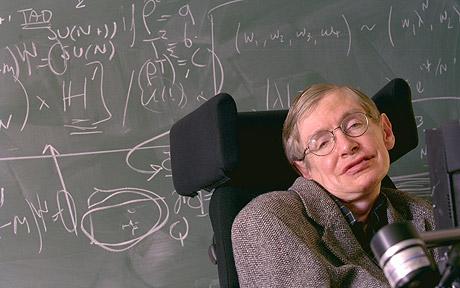 It is an event “of cosmic proportions”, said one Palestinian academic, a befitting description of Stephen Hawking’s decision to boycott an Israeli academic conference slated for next June. It was also a decisive moral call which was communicated by Cambridge University, where Hawking is a professor, on May 8.

Hawking is a world-renowned cosmologist and physicist. His scientific work had the kind of impact that redefined or challenged entire areas of research from the theory of relatively, to quantum mechanics, to other fields of study. This towering figure is also wheelchair-bound – suffering from complete physical paralyses caused by amyotrophic lateral sclerosis (ALS) disease. For Hawking, however, such a painful fact seems like a mere side note in the face of his incredible contributions to science, ones that are comparable to only few men and women throughout history.

What is considered a prestigious scientific conference in Israel is hosted by President Shimon Peres, most remembered by Lebanese and Palestinians for ordering the shelling of a United Nations compound near the village of Qana in South Lebanon in 1996. The compound was a safe haven, where civilians often sought shelter during Israeli strikes. Not that time around, however. 106 innocent people, mostly children and women, were killed and 116 wounded, including UN forces. That harrowing event alone would have sent Peres, then Israel’s prime minister, to serve his remaining years in jail. But of course, Israel is above the law, or so the Israeli government believes and has consistently behaved in the last 65 years, at a price tag of uncountable lives, untold destruction, and protracted suffering of entire nations.

Hawking’s response to the boycott call was immensely important. The man’s legendary status aside, the Boycott, Divestment and Sanctions (BDS) movement has proved more durable and successful than its detractors – mostly Israel’s apologists – want to believe. Hawking’s decision was also a testament that reason and morality should and must go hand in hand. Israel’s boasting of its scientific accomplishments should mean zilch if such technology is put to work to advance state violence, tighten military occupation, and make killer drones available to other countries, thus exporting violence and mayhem. That very ‘science’ was used in abundance in Israel’s latest two wars on Gaza (2008-09 and 2012) which claimed thousands of lives between dead and wounded.

Cambridge University, perhaps wary of a possible backlash, tried to mask Hawking’s decision as one that is compelled by health reasons, which, of course, was not the case at all. The university eventually retracted the statement, for the British scientist wished to make his decision crystal clear. The British Guardian newspaper reported on Hawking’s rebuff of the conference, citing a statement by the British Committee for the Universities of Palestine, itself coordinated with Hawking’s office:

“We understand that Professor Stephen Hawking has declined his invitation to attend the Israeli Presidential Conference Facing Tomorrow 2013, due to take place in Jerusalem on 18-20 June. This is his independent decision to respect the boycott, based upon his knowledge of Palestine, and on the unanimous advice of his own academic contacts there.”

Unlike other acts of boycott, sometimes dismissed by Israeli officials as insignificant, this one was manifestly shocking for Israel. Yigal Palmor, spokesman for Israel’s Foreign Ministry was quoted by the New York Times saying “never has a scientist of this stature boycotted Israel.”

And since it was unexpected, Hawking’s respect of the boycott generated disorganized Israeli and pro-Israeli responses, ranging from demeaning jokes and insults pertaining to his illness, unwarranted accusations, and even shaming him for using technology supposedly developed in Israel to combat his deteriorating ALS condition.

Never before has the country lost control over its carefully tailored narrative of its military occupation and violations of human rights in Palestine as is the case these days. While on one hand, Israeli officials speak of ‘peace’, they continue to issue tenders to build more settlements or expand existing ones, all built illegally on Palestinian land. On the very day that Hawking’s decision to boycott the conference was announced, ‘civil administration’ in Israel agreed to the construction of 296 new housing units in the illegal settlement of Beit El, thus entrenching military occupation and ethnic cleansing. Israeli officials and media still insist that there are no links whatsoever between such stark violations of international and humanitarian law and the rising boycott movement. They indefatigably accuse their critics of ‘anti-Semitism’ (which is hardly affective anymore) and warn of attempts at the ‘de-legitimatization’ of Israel, as if they expect the world to remain completely oblivious to its perpetual war crimes, illegal occupation and institutionalized discrimination against non-Jewish inhabitants of Palestine and Israel.

The dialectics of Hawking’s decision are also important. It is a proof that civil society remains relevant and can be affective, and that official venues are not the only platforms in which the occupation of Palestine can be discussed and justly addressed. Nearly 20 years have passed since the Oslo Accords were signed, yet the Israeli occupation seems much more rooted than it was in 1993.

There is little doubt that the boycott movement is in constant growth, and not simply because of the recurring news of artists and academics refusing to visit Israel, or to take part in Israeli-sponsored events. Equally significant is the existence of strong layers of support, provided by civil society that makes it possible for artists, academics, and others to adhere to the call of boycott, without fearing serious repercussions.

It was revealed that a letter to Hawking aimed at dissuading him from joining the conference was signed by 20 academics from many universities, including MIT, Cambridge, London, Leeds, Southampton, Warwick, Newcastle, etc. The professors told Hawking they were ‘surprised and deeply disappointed’ that he had agreed to take part in the conference, which is also to be attended by former British Prime Minister Tony Blair and former US President Bill Clinton, each with his own record of war crimes accusations spanning from Sudan, to Afghanistan, to Iraq.

But criticism of Hawking is not only emanating from Israel and its predictable circle of diehard supporters, but it is also coming from those who count themselves as members of the Palestinian solidarity camp. The latter group, which is shrinking in number and outreach, argue that boycotting all aspects of Israel’s academic, cultural, and political life will play into Israel’s ‘anti-Semitism’ and ‘de-legitimization’ arguments.

But can the solidarity movement limit its boycott to a few Israeli companies with links to West Bank settlements and expect to achieve tangible, long term results? Those who think that boycotting the occupation is enough seem not to understand the nature of the relationship between West Bank setters and the Israeli government. Israel treats the settlements and its well-armed inhabitants as part and parcel of the Israeli state and economy. They are residents of Israel, even if they live near Ramallah. There is no separation whatsoever except of some imaginary ‘Green Line’ and such. And now with the Apartheid Wall, even that separation is being blurred and redefined.

Palestinians in Gaza or Nablus don’t see any difference between a solider who lives in an illegal Jewish settlement or another who lives inside Israel. They are all capable of committing murder, as many surly have, unhampered by geography or borders. International civil society too should not fall into the trap of illusory distinctions. This also makes Hawking’s decision to boycott an Israel-based conference “of cosmic proportions”. It is morally defensible and ethically sound, qualities befitting a formidable man of reason like Stephen Hawking.