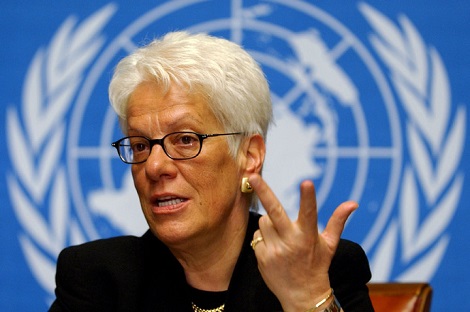 Carla Del Ponte, a member of the U.N. Independent International Commission of Inquiry on the Syrian Arab Republic (AP)

Carla Del Ponte, a member of the U.N. Independent International Commission of Inquiry on the Syrian Arab Republic (AP)

Recent remarks by Carla Del Ponte, a Swiss investigator of the UN Independent Commission of Inquiry, have changed the nature of debate on the use of chemical weapons in Syria’s civil war. Momentum had been building up for months against Bashar al-Assad’s government, first on the basis of accusations that such weapons were in use, followed by heavy hints by anti-Assad groups and Western politicians that the Damascus regime was guilty of chemical warfare against its opponents and civilians. There is no doubt about the unspeakable brutality committed by both sides in the conflict, but chemical warfare, if proven, would mean escalation to another level involving serious war crimes.

Carla Del Ponte, Switzerland’s former attorney general and prosecutor of the UN tribunals for former Yugoslavia and Rwanda, is no pushover. She is now a member of the Commission of Inquiry on Syria, appointed under the auspices of the UN High Commissioner for Human Rights. Contrary to subsequent insinuations that she did not know what she was talking about, Del Ponte had chosen her words carefully. She had said that witness testimony made it appear that “some chemical weapons were used, in particular nerve gas.” And it appeared to have been used by the “opponents, by the rebels.” There is “no indication at all that the Syria government … used chemical weapons.” She said she was a “little bit stupefied” that the first indications were of the use of nerve gas by the opponents.

Del Ponte’s remarks, made amid reports of gains by Syrian government forces, seemed to undermine the position of rightwing hawks in Washington like Senators John McCain and Lindsey Graham, and in London Prime Minister David Cameron and Foreign Secretary William Hague. These are some of the powerful figures who craft Western policy, but hardly objective and credible voices on Syria and the wider Middle East.

Within hours, enthusiastic interventionists in Washington and a somewhat reluctant Obama administration were scrambling to adjust. The White House said the United States believed that chemical weapons were used by the Assad regime. In a stark reminder of Iraq in 2003, the British Prime Minister David Cameron insisted in Parliament: “I can tell the House that there is a growing body of limited but persuasive information that the [Syrian] regime has used and continues to use chemical weapons.” His Foreign Secretary William Hague agreed. Mainstream television channels and newspapers remained broadly uncritical, unquestioning, even generous in giving the benefit of the doubt to Hague, despite lessons of Iraq.

Persuading those who are ideologically drunk and politically myopic is often a hopeless undertaking. Hunger for war and lust for power or for distant resources always impair both reason and morality. The developing situation on the ground has made the war hawks struggle for credibility. For them, the last resort is to assert with dead certainty their “belief” that it is Bashar al-Assad’s forces who have employed chemical weapons and committed war crimes. How could “freedom fighters” do this?

The changing reality of Syria’s long and brutal war, in which government forces show much greater resilience than their opponents’ predictions, has generated some desperation among the rebels and worry in the American and European capitals about Islamist factions gaining control of the anti-Assad campaign. The capture by rebels of UN peacekeeping troops in Syria, freed after a week of behind-the-scenes activity, tells the story, bringing a little more balance in the scenario usually painted before us.

It was the second time in two months that UN peacekeepers had been held by a rebel faction. The United States and its allies are trapped between delusions of total victory in the Middle East and its true consequences – emergence of anti-Western forces such as Al-Nusra Front that are even more aggressive and erratic.

The outcome of the recent Moscow visit of President Obama’s new secretary of state John Kerry is instructive. America’s agreement with Russia that they co-sponsor an international conference to find a negotiated settlement raised some eyebrows in Washington and among U.S. allies in Europe and the Arab world. President Vladimir Putin seemed to have prevailed in his insistence that Assad’s exit cannot be a precondition. But this precondition is the starting point for the Syrian rebels and many of their foreign supporters who have a wider Middle East agenda. A commentary in Italy’s rightwing publication Il Geornale said in its headline, “Obama’s Defeat: To Pacify Syria He Is In Cahoots With Putin.”

Prime Minister David Cameron of Britain, struggling to maintain his authority within his Conservative Party and coalition with the Liberal Democrats, immediately flew off to Moscow for talks with Putin in an attempt to see that any international conference on Syria is held in London; Cameron’s trip to Washington would be next; Benjamin Netanyahu of Israel planned a visit of his own to Moscow after ordering two secret air attacks against Syrian military facilities in a week; and Israeli and Western newspapers issued warnings that Russia was about to supply S-300 missiles to Assad.

As for Russia, Foreign Minister Sergey Lavrov maintains that Moscow is “not planning to supply Syria with any weapons beyond the current contracts,” which, he says, are “for defensive purposes.” Russia’s message to Washington, delivered a year ago, continues to be “hands off Syria and Iran.” Obama continues his rhetorical maneuvers. And the war goes on.