The Financial Press: A Disinformation Machine 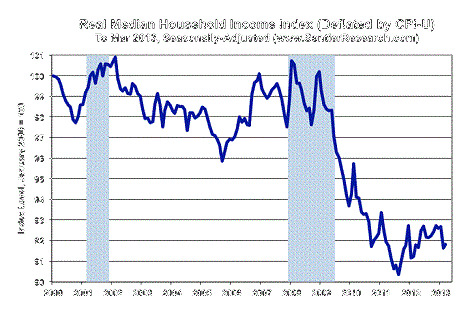 Dave Kranzler of Golden Returns Capital declares the April payroll jobs report that was released on May 3 by the Bureau of Labor Statistics to be “fictitious.”

I agree with both. But don’t expect the financial press to report the facts.

Let’s take a walk through the BLS report and you can arrive at your own conclusion.

The BLS report says that the private sector created 185,000 service jobs in April. Even if this report were true, it would have negligible effect on the unemployment rate as about 127,000 new jobs are needed each month just to stay even with population growth and current unemployment rate.

But is the BLS report true?

There were zero jobs created in manufacturing.

Considering the credit-restrained and hard pressed consumer, the jobs figure for bill collectors is likely correct.  But why would there be 29,000 new jobs in retail trade when real retail sales are falling?  Why would there be new professional service jobs when large consulting companies such as IBM are reducing the hours of their contract employees? How can 38,000 waitress and bartenders be hired in one month when consumers have so little discretionary income?

Notice, too, that the BLS reports that 6,000 construction jobs were lost in April.  Yet, the financial press is full of reports of “housing recovery.”

You know those thousands and thousands of fracking jobs that the fracking industry has been hyping so that communities, desperate for jobs, ignore the destruction of their surface and ground waters?  Well the BLS report shows that oil and gas extraction jobs, which includes normal oil and gas recovery, peaked in February.  Only 900 jobs were created in April, a small reward for destroyed aquifers and surface streams. People who live in fracking areas have been warned to open their windows when showering to avoid being asphyxiated because of the methane in the water and to not be surprised if their water actually burns. There is no doubt that fracking because of its enormous external costs produces a net economic loss.

In America everything is hype for a buck. They will sell you any lie. And the bulk of the population, of course, can be counted on for falling for every lie.

In my opinion, the March BLS jobs report of only 88,000 new jobs, only 69 percent of those needed to stay even with population growth, undermined the Obama regime’s recovery hype and the stock market’s confidence in “recovery.”  Even brainwashed Americans have learned that “jobless recovery” is an oxymoron.  So the word was passed to the political appointee overseeing the BLS to avoid further embarrassments. However, like the old Soviet press, the professional staff delivered the required report in a way that undermined it. Goods-producing jobs are reported to have dropped by 9,000 and retail stores are being closed, so why are 100,000 new jobs needed in retail trade and professional and business services?

John Williams explains the deception in the unemployment rate reporting. The 7.5 percent reported rate is not the product of new jobs generated by a recovering economy. It is the result of discouraged workers who, unable to find jobs, give up looking and, thus, cease being counted in the work force. The real rate of unemployment when discouraged workers are counted as unemployed is 23 percent.  You can see the truth of this in the collapsing labor force participation rate. The collapse in the participation rate is not the result of a return to the prosperity of my youth when one-earner families were the norm.  It is the result of millions of Americans unable to find employment and no longer being counted in the labor force.

Anyone who thinks an economic recovery has been ongoing since June 2009 can cure themselves of the delusion by looking at this chart: