President Kennedy’s Speech, Half a Century Ago 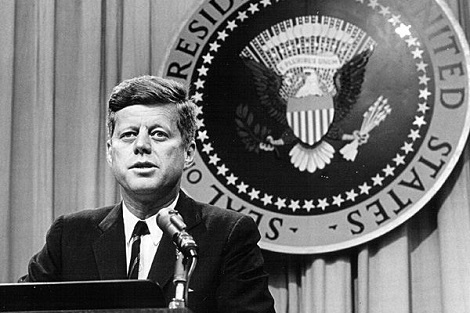 I don’t know how many times in the 50 years since President John F. Kennedy made his much celebrated 1963 speech at American University in Washington, D.C. I’ve heard or read that if only he had lived he would have put a quick end to the war in Vietnam instead of it continuing for ten more terrible years, and that the Cold War might have ended 25 years sooner than it did. With the 50th anniversary coming up June 13, we can expect to hear a lot more of the same, so I’d like to jump the gun and offer a counter-view.

Let us re-examine our attitude toward the Soviet Union. It is discouraging to think that their leaders may actually believe what their propagandists write. It is discouraging to read a recent authoritative Soviet text on Military Strategy and find, on page after page, wholly baseless and incredible claims such as the allegation that “American imperialist circles are preparing to unleash different types of war … that there is a very real threat of a preventative war being unleashed by American imperialists against the Soviet Union” … [and that] the political aims – and I quote – “of the American imperialists are to enslave economically and politically the European and other capitalist countries … [and] to achieve world domination … by means of aggressive war.”

It is indeed refreshing that an American president would utter a thought such as: “It is discouraging to think that their leaders may actually believe what their propagandists write.” This is what radicals in every country wonder about their leaders, not least in the United States. For example, “incredible claims such as the allegation that ‘American imperialist circles are preparing to unleash different types of war’.”

In Kennedy’s short time in office, the United States had unleashed many different types of war, from attempts to overthrow governments and suppress political movements to assassination attempts against leaders and actual military combat – one or more of these in Vietnam, Cambodia, Laos, British Guiana, Iraq, Congo, Haiti, Brazil, Dominican Republic, Cuba and Brazil. This is all in addition to the normal and routine CIA subversion of countries all over the world map. Did Kennedy really believe that the Soviet claims were “incredible”?

And did he really doubt that that the driving force behind US foreign policy was “world domination”? How else did he explain all the above interventions (which have continued non-stop into the 21st century)? If the president thought that the Russians were talking nonsense when they accused the US of seeking world domination, why didn’t he then disavow the incessant US government and media warnings about the “International Communist Conspiracy”? Or at least provide a rigorous definition of the term and present good evidence of its veracity.

Quoting further: “Our military forces are committed to peace and disciplined in self-restraint.” No comment.

“We are unwilling to impose our system on any unwilling people.” Unless of course the people foolishly insist on some form of socialist alternative. Ask the people of Vietnam, Laos, Cambodia, British Guiana, and Cuba, just to name some of those in Kennedy’s time.

“At the same time we seek to keep peace inside the non-Communist world, where many nations, all of them our friends.…” American presidents have been speaking of “our friends” for many years. What they all mean, but never say, is that “our friends” are government and corporate leaders whom we keep in power through any means necessary – the dictators, the kings, the oligarchs, the torturers – not the masses of the population, particularly those with a measure of education.

“Our efforts in West New Guinea, in the Congo, in the Middle East, and the Indian subcontinent, have been persistent and patient despite criticism from both sides.”

Persistent, yes. Patient, often. But moral, fostering human rights, democracy, civil liberties, self-determination, not fawning over Israel…? As but one glaring example, the assassination of Patrice Lumumba of the Congo, perhaps the last chance for a decent life for the people of that painfully downtrodden land; planned by the CIA under Eisenhower, but executed under Kennedy.

“The Communist drive to impose their political and economic system on others is the primary cause of world tension today. For there can be no doubt that, if all nations could refrain from interfering in the self-determination of others, the peace would be much more assured.”

“The United States, as the world knows, will never start a war.”

So … Vietnam, Laos, Cambodia, Cuba, and literally dozens of other countries then, later, and now, all the way up to Libya in 2012 … they all invaded the United States first? Remarkable.

And this was the man who was going to end the war in Vietnam very soon after being re-elected the following year? Lord help us.