How Damascene Jews Hope to Return … to Normalcy 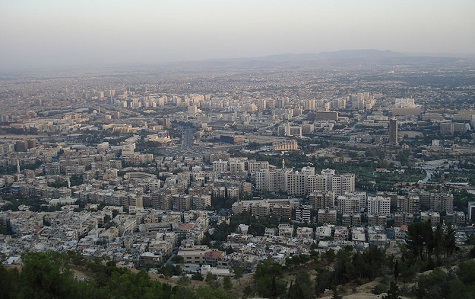 Bab Touma Jewish Quarter, DAMASCUS — Growing up in the small town of Milwaukie, Oregon and until after graduating from high school, I never knew or knowingly met a Jew; not until my first post-high school job as a swimming instructor and life guard at the Portland Jewish Community Center, having recently earned an American Red Cross Water Safety Instructor Certification—something I would recommend to any teenager today. My plan was to teach swimming and lifeguard over the summer at the JCC until the fall, when I planned to head to Boston University.

It was a terrific job. I got to swim laps during work when no one was in the pool, was given free lunches, and learned a lot from the old couple from Poland who handed out towels and looked after the pool dressing rooms. We became good friends. When we were first introduced, I noticed that this inseparable couple walked stooped over, seemed to be in failing health and had what looked like numbers tattooed in blue ink on their right arms. I had no idea what the numbers were for and didn’t want to appear nosy, so it wasn’t until a couple of weeks later, during lunch one day, that my new friends explained what had happened to them and how they came to be in Oregon. They explained how they had miraculously survived death at a place they called Auschwitz, a word I don’t recall having ever heard.

From not having any Jewish friends in high school, in Boston I soon had mostly Jewish friends and several times was invited for a weekend to Brooklyn, Long Island, Teaneck, New Jersey and other places in the metropolitan New York area. For a hayseed kid from a small town in the Pacific Northwest, it was great to have socially-connected and sophisticated Jewish girlfriends, all platonic until I fell deeply in love with Hanna K, an observant ultra-orthodox student from a Newton, Massachusetts family. Hanna, who always covered her head, stood out on campus from the typical Jewish girls from places like the Bronx or Westchester County, NY. Despite our mutual affection, Hanna explained she could never invite me to meet her family, who lived just 20 minutes from BU, because I was not Jewish and her father was very conservative. Both her parents fled Germany sometime in the 1930s. I more or less understood, and she taught me a lot about Judaism, and I actually studied Hebrew for a while, at Hanna’s insistence.

Finally, I marshaled the courage to visit her father’s real estate investment Office, which was just opposite the Boston Common and the historic Arlington Steet church within walking distance of Boston University Law School. Much like a nervous a new lawyer appearing before a harsh judge for the first time, I practiced my lines as I walked along. I still remember the speech I hoped to deliver, but close to his office I passed the statute of the William Lloyd Garrison, the 19th century editor of the abolitionist newspaper, The Liberator, and one of the founders of the American Anti-Slavery Society, as well as a prominent voice for the Women’s Suffrage movement. I paused to read the words inscribed on the stone at the base of his statue, words still clear to me: “I am in earnest—I will not equivocate—I will not excuse—I will not retreat a single inch—AND I WILL BE HEARD!” They emboldened and gave me renewed courage to face Hanna’s father.

My petition to Hanna’s very stern father, Abraham, was that I deeply loved his daughter, and that I would try to be for her the best possible husband. I then made what I hoped would be a case-winning appeal: “And sir, I would like you to know that by association, by education, by liberal politics, by philosophy and by choice, I consider myself Jewish and am studying Hebrew and Jewish religious teachings.” It was true and I was sincere.

As Hanna subsequently told me, her father was not at all liberal in his politics, was an atheist and he was not in the least impressed with my presentation. Before rather abruptly showing me the door, he did sort of mumble that he would consider the matter and inform me of his decision. I never heard back from the gentleman. Hanna and I remained inseparable during my last couple of weeks in Boston. But, as happens far too often in life, one loses contact with the dearest of dear friends. I left for a summer job in Washington, D.C., and then England, and I have no idea where life has led her. To happiness I hope.

During the following years I experienced the intense Zionization among those in the Jewish community I was involved with while working on the Hill in Washington. Being known to be pro-Palestinian, I noticed the increased

politicization and polarization among my Jewish friends. Since then, thanks somewhat to the Internet, this fracturing of the Jewish community has only increased, with even some progressive liberal friends getting caught up in the anti-Arab, anti-Islam, neocon-Zionist hate-mongering-nonsense now so endemic in the US.

Against this backdrop, and after years of living in this region with few Jews, recent visits to the Jewish community in Damascus has been a joy and a breadth of fresh air because the ugliness of fascist Zionism and its corrosive effects on Judaism as a philosophy is absent among Jews here. It’s like the old days. I have now met more than half of the 30-40 (depending on whose estimate) Jews remaining in the Bab Toumy Jewish Quarter of Damascus. In 2003, for example, the Jewish population was estimated to be fewer than 100. In 2005, the US State Department estimated the Jewish population at 80 in its annual International Religious Freedom Report for 2008. In May 2012, it was reported by the State Department that only 22 Jews still lived in Syria, all of them elderly and living in Damascus in a building adjoining the city’s only functioning synagogue. This is not true. The remaining Jews live scattered around the Jewish Quarter and generally in family homes they have occupied for many years.

My new excellent friend Saul is the last remaining Jewish tailor in Syria. We spend time discussing just about everything, but what I particularly like about Saul, and Albert Camero, the head of what’s left of the Jewish community in this battered country, is our discussions of “what went wrong” from the days when Jews and non-Sunnis like Twelver Shiites, Alawites, various Christian denominations, Druze, and other heterodox communities lived together in Syria, nearly as family.

Other new Jewish friends in Syria include R. and G., two sisters in their late 70s who were born in Syria and live in their grandfather’s lovely home amidst the now empty mansions and less imposing Jewish homes in the Jewish Quarter. Their residence is next to the former home of Nissim Indibo, the last Rabbi in Damascus who died in 1976. “The sisters”, as they are known to this tiny community, invited me to tea in their home adorned with Hebrew tiles on the walls and other Jewish religious artifacts. One day I listened to R. and G. for five hours as they recited their families’ history in Syria and even their current political views. More time with them would have been better,so interesting and charming are they.

A few years ago the American embassy offered Saul, R., and G. visas to America, where over 75,000 Syrian Jews live in just New York. Saul showed me his. But like other Jews here, when the subject came up about moving to occupied Palestine or America, they explained they have no interest in leaving their country where, like the Palestinians living in Syria, they are treated the same as any other Syrian, including by having free education, universal government-paid health care, and the full right to work and to own a home. They are Syrian.

What the Jewish community in Damascus believes must happen to resolve the current crisis is precisely what other Syrians in this capital city want. The process leading to peace, noted below, is gleaned from interviews with a cross-section of citizens in the Jewish Quarter and also from conversations with a spectrum of Damascene society ranging from academics, retired and current officials, members of the opposition in Parliament, small business and shop owners, and just random people enjoying the spring weather in the parks and surprisingly packed popular restaurants.

I was invited to such a restaurant this week. Into the late evening, the place in central Damascus was filled with narguilé smoking, card playing, scrumptious desert eating, laughing and joking young and old people. I was tempted to mount one of the tables and shout to the revelers: “Excuse me, please, but haven’t you folks heard there is a civil war going on around here!” The zest for life is strong here—even enveloped as it is, by so much death and unimaginable suffering.