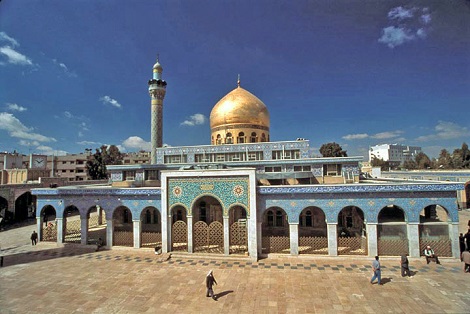 Protected by her own….

Sayyeda Zeinab Shrine, DAMASCUS — It is well known in this region that powerful foreign and domestic forces in nearly every country, but particularly Iraq, Syria, and Lebanon, are increasingly acting, for purely political purposes, to ignite a bloody internecine conflict within Islam. Indeed, the March 17 attacks targeting four Sunni sheiks in Beirut that led to immediate road blockings in Beirut, Sidon, and the Bekaa Valley is a reminder of the vulnerability of Lebanon’s own delicate sectarian balance to potential chaos.

The seemingly rapid escalation of Shia-Sunni sectarian strife pulsating back and forth across Syria and in and out of Iraq and Lebanon appear to some analysts to be unstoppable.  This week, the UN Security Council expressed alarm that rising sectarian violence threatened a return to civil war in Lebanon. The sect targeted for destruction is mainly, but not exclusively, Shia Muslims, and a potential conflagration among a few Muslim sects is smoldering from Yemen to Libya to Pakistan and in more than a dozen countries. Places of worship are being attacked with the hope of creating flight and destruction among so-called kuffar (infidels) and other alleged “enemies of Allah.”

As the violence continues in parts of Syria, it is not always clear who exactly is behind, for example, the thefts of antiquities from museums and shops, the carting off of medical equipment from hospitals, the widespread stripping of certain factories in places like Aleppo and moving their assets to Turkey, apparently with little if any objection from Ankara, and the damaging of mainly Christian and Shia places of worship. But there is little doubt that Islamist extremists, are behind many of these crimes. Against this backdrop of targeting religious institutions and  shrines of minority sects in Syria, it is little wonder that following serious attacks on the Sayedda Zeinab Shrine near the village of Zoa south of Damascus, one as recently as last month, that Shia Muslims and others across the world are deeply concerned about its safety. Three recent attacks on the resting place of Zeinab bint Ali, the granddaughter of the Prophet Mohammad (pbuh) has also led to speculation that certain elements may launch a ‘false flag’ attack to ignite conflict between Sunni and Shia. Al-Qaeda affiliated groups such as Jabhat al Nursa and Al Qaeda in Iraq (AQI) have pledged to defeat Lebanon’s Hezbollah in the name of Allah.

Tens of thousands of Shia pilgrims and others from around the world visit this Damascus suburb every year, most to pray at the Sayyeda Zeinab shrine. It was also one of the reasons why I wanted to go there.

But trying to get to Sayyeda Zeinab has not been easy these past few months. In fact this observer’s new lucky number may be five.  Because that is the number of times I thought I had a deal with a driver to take me from central Damascus to the Zeinab shrine. But each time, shortly before our scheduled departure, the driver invariably called to tell me his car broke down or he had to attend a family event or that the road had been hit by a mortar and was impassable, or he could not find any benzene. Taxis are understandably a bit spooked in Damascus these days and as with the road to the airport there are sometimes snipers peering around and an occasional IED or two.  Fortunately some fellows from Lebanon who are among those guarding the shrine sent me a message that it was ok to come and I trusted their judgment.  Finally I found a driver and he took me to Fao without problems.  However, he was unwilling to wait for me while I visited the Shrine and he abruptly split, even before I had a change to pay him, leaving me to find another way to return to Damascus.

As this observer exited the Shrine, having performed absolution type prayers for myself and friends in Lebanon and Syria who specifically asked me to, I was approached by a middle-aged woman who turned out to be from Homs.  She had lost her home and her neighborhood was emptied by shelling, so she had come to the village of Fao, which she thought would be safe. But as she told me later she wanted also to be near Zeinab bint Ali, the 7th Century Heroine of Karbala, during these uncertain times.

One resident who lives near the Sayedda Zeinab told this observers that during the most recent attack on the shrine, the bomber detonated an explosives-packed van that he drove into a parking lot about 50 meters from the shrine. The blast shattered the shrine’s windows, knocked down chandelier ceiling fans, and cracked some of its mosaic walls. He added that militiamen at Sayyeda Zeinab were motivated partly by the desire to prevent a repeat of the wholesale sectarian violence that followed the 2006 attack on the Iraq’s Shiite Imam al-Askari Mosque, blamed on Al-Qaeda, which cost thousands of lives, both Sunni and Shia.

The story of Zeinab at Karbala, and her subsequent life, like the passion play of Karbala itself, is history that one never tires of hearing.  I had read about both but when this obviously devout woman who told me her name was Miriam, approached me, assuming I guess, that I was a tourist unfamiliar with this holy place, which was true. I was pleased to sit with her, to be quiet, and to listen.

Miriam summarized the Battle of Karbala in October 680, in present day Iraq,  and how it is commemorated during Ashoura (October tenth) by millions across religious divides because of its universal message of resistance to oppression, relentless pursuit of justice and even sacrificing one’s life for the good of the community. The actual battle pitted a grandson of Prophet Muhammad (pbuh), Hussein bin Ali, one of two of Zeinab’s brother killed that day, against the caliph of the time in the first of a series of succession crises that shaped the unfortunate historic split between Sunni and Shia Muslims.

I was amazed that like me and others from various countries and cultures who I have crossed paths with over the past few years in this region, and who were also raised in a Christian tradition, that my new friend Miriam viewed the 7th century suffering of Hussein Ibn Ali and those who were martyred at Karbala as in some ways similar to the crucifixion of Jesus Christ at Calvary 700 years earlier. We each lit up at the realization that the other exactly understood this connection and the historic resistance ethos that Karbala and Calvary have meant for mankind and the current relevance of both working together for humanity as pillars of the Resistance.

But Miriam shed even more light for this admittedly dim observer by mentioning another woman, in some ways much like Zeinab, who was from Europe.  As a group of chadored Iranian women gathered around us, with a Farsi interpreter relating Miriam’s words, our group shared a common and rapt spirituality. Miriam told us that during this month of recognizing women’s accomplishments, she was reminded of the similarity between Zeinab bint Ali and La Pucelle d’Orléans, known as Jeanne d’Arc, who was falsely accused of heresy and burned alive at the stake for resisting the English occupation of her country.

Miriam explained many parallels between the “two sisters of Resistance”, as she called them, even quoting from memory the historic speech of Zeinab in Damascus to Yazid, the killer of her family, including her bothers Hussein and Abbas and their dozens of followers and relatives at Karbala in present day Iraq.

On the 11th Muharram, 61 AH, after the battle of Karbala, the caravan of the captives, including Zeinab, were marched through the city of Kufa and Sham. For one year they stayed captives in Damascus prison. Zainab encouraged resistance among her fellow prisoners and fearlessly faced Yazid and recited to him the wrongs he had done. Her address to Yazid ends with a black-clad Zeinab addressing Yazid. “You will not succeed in erasing our memory,” she says.

Miriam explained that Zeinab bint Ali, like La Pucelle d’Orelans, was devout, frugal, and unstintingly generous to the poor, homeless, and parentless. Both communicated with Allah and were fierce defenders of justice, the cause for which they both willingly sacrificed themselves. Through her good works, Zeinab helped her community to know the principles and practices of Islam.

Concerning Joan, the uncrowned King Charles VII sent her to the siege of Orleans as part of a relief mission. She gained prominence when she overcame the dismissive attitude of veteran commanders and lifted the siege in just nine days. Several additional swift victories against overwhelming odds led to Charles VII’s coronation at Reims and hastened the departure of the British.  Despite her achievements, Joan was accused of heresy. Joan’s trial record demonstrates her remarkable intellect, Miriam explained. The transcript’s most famous exchange is an exercise in subtlety. “Asked if she knew she was in God’s grace, the illiterate farm girl answered: ‘If I am not, May God put me there; and if I am, may God so keep me.’” The question of course was a prosecutorial trap carefully set for Joan. Church doctrine held that no one could be certain of being in God’s grace. If Joan had answered yes, then she would have convicted herself of heresy. As the still preserved trial transcript proves, Joan’s trial was a fraud from beginning to end, and she insisted, even when threatened with torture and facing  death by fire, that she was guided by God to liberate her country from occupation.

Miriam told us that “one of the legacies of the sisters Zeinab bint Ali and Joan d’Arc is that every woman should realize that she can always make a positive difference for mankind. She can always reach for and achieve the better. Those men alone cannot win independence and prosperity, neither can the women. Together, and under the banner of resistance at Karbala and Calvary and following the examples of Zeinab and Joan d’Arc they can achieve to justice and defeat occupation and hegemony.”

One Lebanese druze pilgrim explained to this observer that Sayedda Zeinab represents all women and all who seek justice in the face of tyranny and that the Sayyeda is “everywoman”, meaning that Zeinab does not belong just to the Shia or Muslims but to all people of goodwill.

Zeinab bint Ali continues to rest in peace at the sacred shrine at Foa village southwest of Damascus—her final community.  Repairs at Sayedda Zeinab have been made, and the beauty and tranquility of the holy site has been fully restored.

No doubt to the relief of untold millions, the Heroine of Karbala is being protected by her own–Muslims from different sects as well as Christians like Miriam among others—for they, and all who are part of the culture of resistance to injustice, are truly among Zeinab’s own. It is right that we should protect her for Zeinab bint Ali, like Karbala, belongs to all of us.

As I was trying to figure out how to get back to Damascus and we said good-bye, Miriam told me she was Christian. She understood me perfectly and gave me a warm knowing smile when I gestured toward the glorious Sayyeda Zeinab resting place, and opined that it seems likely that spiritually, we are both Shia-Christian and Christian-Shia.