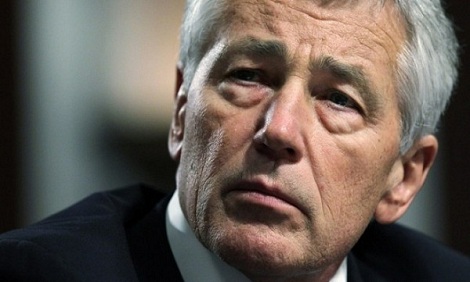 Americans have been shamed many times by their elected representatives, who cravenly bow to vested interests and betray the American people. But no previous disgraceful behavior can match the public shame brought to Americans by the behavior of the Senate Republicans in the confirmation hearing of Senator Chuck Hagel as Secretary of Defense.

The most embarrassing behavior of all came from the craven Lindsay Graham, who, while in the act of demonstrating his complete subservience by crawling on his belly before the Israel Lobby, dared Hagel to name one single person in the US Congress who is afraid of the Israel Lobby.

If I had been Hagel, I would have written off the nomination and answered: “You, Senator Graham, and your 40 craven colleagues.”

Indeed, Hagel could have answered: The entire US Congress, including Rand Paul who pretends to be different but isn’t.

The real question is:  Who in the Congress is not afraid of the Israel Lobby?

The hatchet job on Hagel is driven by fear of the Israel Lobby.

Perhaps the worst affront Israel’s American representatives ever inflicted on the US military was the coverup of the Israeli air and torpedo boat attack on the USS Liberty in 1967. The Israeli attack failed to sink the Liberty but killed and wounded most of the crew. The survivors were ordered to silence, and it was 12 years before one of them spoke up and revealed what had happened (James Ennes, Assault On The Liberty). Not even Admiral Thomas Moorer, Chief of Naval Operations and Chairman of the Joint Chiefs of Staff could get Washington to own up to the facts.

The facts are now well known, but as far as Washington is concerned they are dead letter facts. The entire event has been moved to some parallel universe.

Why are the Senate Republicans out to destroy Hagel for Israel?

The answer is, first, back when Hagel was a US Senator he refused to be intimidated by the Israel Lobby and declared, “I am a US Senator, not an Israeli Senator.” In other words, Hagel did the impermissible. He said he represented US interests, not Israel’s interests.  Hagel’s position implies that the interests of the two countries are not identical, which is a heresy.

The second part of the answer is that Hagel doesn’t think that it is a good idea for the US to start a war with Iran or for the US to permit Israel to do so.

But a US war with Iran is what the Israeli government and its neoconservative agents have been trying to impose on the Obama regime. Israel wants to get rid of Iran, because Iran supports Hezbollah in Southern Lebanon, thus preventing Israel from annexing that territory and its water resources, and because Iran supports Hamas, the only Palestinian organization that tries to oppose Israel’s total theft of Palestine, although Iran has never supplied Hamas with effective weapons.

The two organizations that oppose Israel’s territorial expansion, Hezbollah and Hamas, represent large numbers of Arab peoples. Nevertheless, both are declared, on Israel’s orders, to be “terrorist organizations” by the servile US Department of State, which in all reality should be called the Israeli Department of State, as it never puts US interests before Israel’s.

In other words, Hagel did not grovel. He did not say how much he loved Israel and how it would be his great honor to sacrifice all other interests to Israel’s, how he has waited his entire life for the chance to serve Israel as the US Secretary of Defense.

Hagel is not an opponent of Israel.  He merely said, “First, I am an American.”  His lack of craven subservience is unacceptable to the Israel Lobby, which has branded him an “anti-Semite.”

Lindsay Graham, in contrast, has what it takes to be Israel’s perfect choice for US Secretary of Defense.

Graham will go out of his way to please the Israel Lobby. He will pull out all stops and behave with maximum servility to a foreign power in his effort to embarrass the President of the United States and his nominee, a war veteran and former US Senator who simply thinks that the US Congress and the executive branch should put American interests first.

If Lindsay Graham succeeds in doing the Israel Lobby’s dirty work, he will have handed a defeat of the US President to the Israeli Prime Minister, who has demeaned the President of the United States for not doing Israel’s bidding and attacking Iran.

Like Ron Paul, Dennis Kucinich, and Gerald Celente, I stand with our Founding Fathers who opposed America’s entanglement in foreign wars. In an effort to prevent entanglements, the Founding Fathers gave the power to declare war to Congress.  Over the years Congress has gradually ceded this power to the President to the extent that it no longer exists as a power of Congress.  The President can start a war anywhere at any time simply by declaring that the war is not a war but a “time-limited, scope-limited, kinetic military action.” Or he can use some other nonsensical collection of words.

In the first few years of the 21st century, the executive branch has invaded two countries, violated the sovereignty of five others with military operations, and has established military bases in Africa in order to counteract China’s economic penetration of the continent and to secure the resources for US and European corporations, thus enlarging the prospects for future wars. If the Republicans succeed in blocking Hagel’s confirmation, the prospect of war with Iran will be boosted.

By abdicating its war power, Congress lost its control of the purse. As the executive branch withholds more and more information from Congressional oversight committees, Congress is becoming increasingly powerless.  As Washington’s war debts mount, Washington’s attack on the social safety net will become more intense. Governmental institutions that provide services to Americans will wither as more tax revenues are directed to the coffers of special interests and foreign entanglements.

The tenuous connection between the US government and the interests of citizens is on its way to being severed entirely.