Will Washington grasp the hand being offered by the Iranian people? 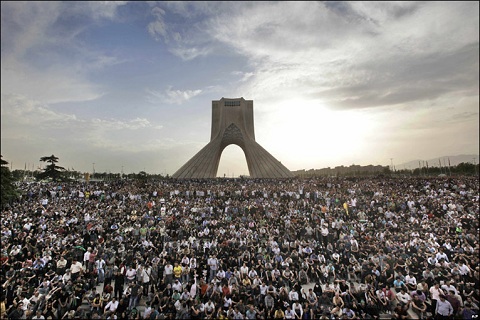 TEHRAN — Truth told, this American observer has attended his share of international conferences and has traveled in more than 70 countries. But, except when traveling in his own country, never has he visited such  a complex country, with its evolving culture and striving  energized society, populated by idealistic people of great warmth, sense of humor, and caring for those in need, as he has experienced in the Islamic Republic of Iran.

Being in Iran during these tense times is to experience an epiphany, which is that Iranians and Americans have so very many needs and interests in common—yes even in our religious beliefs—that both peoples should immediately repair our countries relations and return to the days when 60,000 Iranian students studied in the US and thousands of Americans lived and worked in Iran—all in singular harmony and with myriad mutual benefits.

The deep connection among Muslims and Christians from the seventh century sacrifice at Karbala by Hussein bin Ali and the first century sacrifice at Calvary by Jesus Christ established forever a claimed divine principle of sacrifice of one’s self to resist injustice for the greater good of the community. This bond underpins and connects the two religions and their followers inextricably.

There is probably no country more misunderstood in America than Iran, and it’s due almost entirely to politically motivated demonizations and misrepresentations, including, but not limited to, what President Ahmadinejad really said during speeches relating to the US and the West and the historical imperative to liberate occupied Palestine and every country’s right to develop nuclear energy and to live independently and free of US-led western hegemony. Most Americans’ perceptions of Iran, according to Iranian friends, are limited to images of President Mahmoud Ahmedinejad accused of delivering anti-American speeches.

Another example is the media reports of the February 9 celebration of the 34th anniversary of the Iranian revolution where the BBC and most other media reported the crowds were “frenzied and chanting death to America.”  I was there, and this report is rubbish.  I did hear from time to time a few chants mixed in with revolutionary songs, religious exhortations, and just plain fun. Helping others by offering water and heavy laden older citizens or kids was the motif.

People were happy, not angry, and they could not have been more friendly or curious about the Americans they came upon and who helped them pick up Iranian leaflet flags that blew or were dropped onto the streets, as the Americans understood Iranian pride in their flag and not wanting to see it walked on or subjected to disrespect.

One does not have to look further than the morning newspapers for examples, where one mayfind the likes of Zionist apologist, Iranophobe, and Islamophobe Jennifer Rubin, in her Washington Post screed.  Ms. Rubin, on Valentine’s Day, had only poisonous invective in her heart for any American—even Cupid one imagines—who would dare express any remotely objective idea about Iran. Rubin, a former AIPAC volunteer, lambasted Obama’s nominee for Secretary of Defense, former US Senator, Chuck Hagel, as nearly all 52 Zionist organizations in America have done this past month, because he advocates mutual respect and friendship with Iran. Hagel’s unforgiveable sins include his words on the subject of criminal US-led sanctions against Iran and Syria and the need to build trust and normalize relations through dialogue.

Said Hagel about U.S.-Iran relations: “We shouldn’t be putting conditions on talks or putting all other issues to the side except one issue that we will ‘dictate’ to Iran.”  As far back as 2007, Hagel stated that “In the Middle East of the 21st century, Iran will be a key center of gravity… a significant regional power. The United States cannot change that reality. America’s strategic 21st-century regional policy for the Middle East must acknowledge the role of Iran today and over the next 25 years.” Hagel continued: “On Afghanistan, the United States and Iran found common interests—defeating the Taliban and Islamic radicals, stabilizing Afghanistan, stopping the opium production and the flow of opium coming into Iran. From these common interests emerged common actions working toward a common purpose. It was in the interests of Iran to work with the U.S. in Afghanistan. It was not a matter of helping America or strengthening America’s presence in Central Asia. It was a clear-eyed and self-serving action for Iran.”

Hagel may have erred a bit on Afghanistan and the Taliban, but Rubin found Hagel’s point of view treasonous and has joined the  US Zionist lobby’s call for a witch-hunt when she asks her readers (emphasis added): “Why would the president select someone so deferential toward the Islamic revolutionary government? …During the [Congressional] recess, the Senate should think about that. And it might be interesting to find out who was helping him with these intensely pro-Tehran speeches.”

In Iran today one does not hear Rubinesque hate speech or even lectures about the 1953 US-UK overthrow of Iranian leader Mohammad Mossedeg, or the shooting down on July 3, 1988 of the commercial passenger aircraft Iran Air Flight 655 (IIR655), or the US giving chemical weapons to Iraq, during its US-backed aggression, or even the assassination of Iranian scientists or a number of other US green lighted aggressions against the country.

Much more often, conversations are likely to turn to the need to improve relations and friendly questions about what foreigners are experiencing in Iran and if they need assistance in doing something or information about their country.  Iranians are as open as Americans are by their very nature, and unlike many other countries no subject for discussion is taboo. For this observer, it included  topics such as the “morality police”, execution of drug dealers and homosexuals, “stoning” of women,  attacks on the  Bahá’í Faith, which is the country’s second-largest religion after Islam, the  2009 “Green Revolution”, and any other subject that came to mine, including drinking alcohol and public dating.

One hilarious conversation this observer had with four early 20’s female students during a Conference last week was about the number of Chador wearing women who openly wear makeup these days (more than 60%), how Iranian society is changing rapidly, and the amount of hair some women expose while in public, while wondering if this was not prohibited by Fatwa and how they deal with it. Their responses were immediate and nearly all at once.  No one had even seen one of the Western hyped “morality police” for a long time, and they are few and far between.  One young lady explained that its true she wears her hijab two-thirds’ of the way back on her head and, “If one of those guys dares to say something I will either tell him to mind his own business or if I am in a good mood I will act really, really surprised, shrug my shoulders, wink at him and say something like, ‘“Oh so very sorry, really I am!  It was a big gust of wind that must have blown it back on my head without me noticing!’” Even if there had not even been so much as a soft breeze in days.”

Iranian women are smart, strong willed, even a bit pushy at times, and naturally alluring. Who would want to join some “morality police” unit?  The ladies explained that if one comes up to you on the street and you are really rude to him and tell him to get lost, or worse, then you might get a ticket and your parents would have to come to the police station and sign a pledge that you would try to do better about trying to observe some modesty in public. Again, rather different from what the mainstream media tells us in the West.

And it’s clear whether attending an international  conference on Hollywoodism (www.hollywoodism.org) at the Azadi (Freedom Hotel—formerly the pre-Revolution Hyatt), traveling on the Tehran subway (far cleaner than New York’s!) exploring street souks, visiting the Holy Defense Museum (explaining the 8 years Iran-Iraq war), visiting the home of Imam Ruhollah  Khomeini (who led the 1979 Revolution and was Iran’s leader until his death on June 3, 1989), or walking, for miles it seemed, among the nearly two million people marching to Azadi Square to commemorate this month’s 34th anniversary of the Revolution, when the people of Iran overthrew the American agent, Shah Reza Palavi.

The Iranian people are kind and they are gifted. When I got on the crowded Tehran subway, two young men immediately stood up to offer this observer their seats.  And then we engaged in a very interesting long animated conversation.  Said Hamzeh, “You know, we feel like we understand America and we should be friends. Both of our countries are culturally unique somehow. Your country evolved from European culture but moved in a very distinct direction. In our history, Islam arrived via the Arabs, but as you have been seeing, I am sure, our identity is completely different from Arab countries.”

Mahmoud joined in: “Our society is also made up of many minorities, but we have a single Iranian identity and are very proud of our culture. We’re also familiar with Western ways. For the last 200 years, we were open to the Western world and influenced by European culture, even if some of the ideas, like democracy, have never had a chance to really develop properly but we will continue trying. But we also know what it’s like to be a superpower. For us, it was a long time ago, but we played an important role in this part of the world for many centuries so we can never see ourselves as subject to western or eastern hegemony.”

No experience impressed a group of Americans visiting Iran, including this one, more than the home of Imam Kohmeini and learning from his neighbors and students about the man, scholar, and revolutionary. Visiting his home and Hassineyeh, which have been kept just as they were the day he died, one neighbor recounted how Ayatollah’s Khomeini’s wife, Khadije Saghafi, who passed away in 2009, told her friends that she had only one wish her whole life that the Imam never granted to her.  And that was that she wished for him to ask her for a glass of water at least once. But he never did. The sweet and gentle husband and father did not want even the wind to visit his family’s faces too harshly or for himself to impose on them.   Another neighbor told us, “When we visited his home we often found the Imam washing the dishes, sweeping the floor, and helping in other household chores.”

According to others who knew him well, the Imam led a life of utmost piety and spirituality. In the severe winters of Qom, the he would wake up each night, perform ablution the act of washing oneself for ritual purification) with ice water, and offer his night prayers. His Mafatih (prayer almanac) had to be rebound every few weeks because of how much he used it. Before he began lecturing his students on political activism, he emphasized to them the importance of spirituality and attaining the nearness of Allah.

The simplicity of lifestyle and the modesty of Iran’s revolutionary leader has universal appeal, including American ideals.

There is every reason for Washington’s new administration to reach out to Iran, not just with words but with actions.  The American and Iranian people fervently want this and it wills inestimably benefit both societies. The solution to positive the current straightened Iran-US relations includes contact, visitations, discussions and more discussions and from this both peoples can pressure their governments to leave the past behind and develop bonds of friendship.