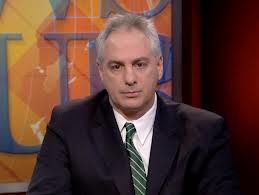 Why Doesn’t the Council on Foreign Relations Fellow Like Flynt and Hillary Mann Leverett?

If there’s one thing mainstream “Iran experts” hate, it’s well-credentialed, experienced analysts who dare challenge Beltway orthodoxies, buck conventional wisdom and demythologize the banal, bromidic and Manichean foreign policy narrative of the United States government and its obedient media. Such perspectives are shunned by “serious” scholars who play by the rules they and their former bosses themselves wrote; those propounding such subversive ideas are likewise excoriated and banished, labeled apostates and attacked personally for failing to fall in line.

Enter Flynt and Hillary Mann Leverett, two former National Security Council officials, who have long questioned the wisdom and efficacy of the past thirty years of U.S. policy towards Iran.  Their new expertly researched and meticulously-sourced book, Going to Tehran: Why the United States Must Come to Terms with the Islamic Republic of Iran, details and debunks numerous propagandized myths and delusional misunderstandings that many Americans have been led to believe about the country that is consistently referred to by our politicians and pundits as “the world’s most dangerous state.” The Leveretts argue that, by at least taking into account the Iranian side of things and reviewing the misguided, myopic and unsustainable American policies toward Iran, the groundwork may be laid for a constructive and beneficial change of course for both nations; by engaging openly and acknowledging past grievances – rather than ignoring, justifying or ridiculing them – a new future is possible, one without threats or war, without sabotage and cyberattacks, without demonization and demagoguery.

The problem is, without such things, the revolving door of Beltway think-tankery and government appointments might not spin so lucratively for our “Iran expert” industry. As a result, the Leveretts and their ideas are pilloried by political and policy elites who confuse heterodoxy for apologia.

In a supremely smug and self-satisfied pseudo-review of Going to Tehran, just published in Survival, the journal of the International Institute of Strategic Studies, Washington’s “go-to” Iran analyst Ray Takeyh launches what is surely a paradigmatic opening salvo on the Leveretts’ work. Needless to say, he didn’t like the book; his review is the intellectual equivalent of a drive-by shooting.  While lambasting the Leveretts, Takeyh fails to actually address any of their contentions or claims, preferring to make grandiose statements condemning their analyses of Iranian politics and foreign policy and their policy recommendations without bothering to back up these statements with evidence or explanation.

Takeyh is a mainstay of the Washington establishment – a Council on Foreign Relations Senior Fellow before and after a stint in the Obama State Department and a founding member of the neoconservative-created Iran Strategy Task Force who has become a tireless advocate for the collective punishment of the Iranian population in a futile attempt to inspire homegrown regime change (if not, at times, all-out war against a third Middle Eastern nation in just over a decade). Unsurprisingly, he dismisses out of hand the notion that “the principal cause of disorder in the Middle East today is a hegemonic America seeking to impose its imperial template on the region.”

This is exactly the worldview that has produced the disastrous U.S. foreign policy of the last few decades, policies advocated time and time again by the same people – not only people like Takeyh, but including literally Takeyh himself – never learning from their mistakes or conceiving there might be a different way to engage the world (say, by not bullying, threatening, demanding, dictating, punishing, bombing, invading, destroying, dismantling, overthrowing, occupying, and propping up dictators). Takeyh’s contemptuous rejection of history means that those who disagree with him – like the Leveretts, even though their experience in government and direct contact with on-the-ground reality in today’s Iran dwarfs Takeyh’s – must inevitably be minions of the ayatollahs.

Takeyh’s dismissal of the Leveretts’ work is especially ironic, given that his own analytic nonsense is legion. He routinely makes statements that aren’t based in fact and that dispute even the most hysterical estimates of the United States government. He has no problem co-writing tomes of warmongering lunacy with psychotics like Matthew Kroenig, convicted criminals and racist demagogues like Elliott Abrams, and garbled inanity with his wife’s insane colleague at the Saban Center and perennial war champion Kenneth Pollack.  Everything he writes is easily destroyed with a basic perusal of facts.

Never bothering to cite any evidence, Takeyh has long assumed Iran – oh sorry, I mean, “the mullahs” (how spooky!) –  are building a nuclear bomb and only the fierce determination of the United States, its benevolent buddy Israel and vital Arab dictator friends can stop it, if not by beating the Islamic Republic into submission through economic and covert warfare, then perhaps by military might. In April 2003, he wrote, “Tehran often claims that instability in the region forces it to pursue nuclear weapons, when in fact it is Iran’s possession of such weapons that would increase instability.” Actually, Iranian officials have never claimed anything remotely like that, instead declaring their commitment never to build nuclear weapons consistently for over 20 years. In 2011, Takeyh assured Washington Post readers, “Exact estimates vary, but in the next few years Iran will be in [a] position to detonate a nuclear device.”

In October 2011, when the US government tried to pretend that a bumbling, bipolar Iranian used-car salesman in Texas had been tasked by the Iranian Revolutionary Guard Corps to hire a Mexican drug cartel to assassinate the Saudi ambassador in a DC restaurant (it is literally impossible to read that without chuckling), Takeyh took to the airwaves to comment on the alleged plot. Speaking on NPR, Takeyh wholly endorsed the U.S. government’s version of events, never for a second doubting their authenticity.  Though he claimed it was “unusual,” Takeyh made sure to add, “I don’t know what the evidence about this is, but I’m not in a position to doubt it.”

There you have it, folks, Takeyh’s entire method of scholarship in a nutshell.

Takeyh’s disdain for empirical reality allows him to take multiple, often contradictory positions on many issues—whatever it takes to align himself with “centrist” foreign policy hawks in the Democratic Party’s national security establishment. In 2006, after the occupation of Iraq had turned irrevocably catastrophic and Democrats were looking for ways to distance themselves from Bush’s Middle East follies, Takeyh argued “for the United States to become more directly engaged in negotiations with Iranians and also make an offer of some corresponding concessions.” While assuming an Iranian desire for latent nuclear weapons capability, he held, “I don’t think they’ve made up their mind yet to cross the threshold and actually weaponize [nuclear power].” He added, “For those who suggest that it is absolutely conclusively determined that Iran wants to have nuclear weapons, I think it behooves them to provide some kind of evidence for that claim.” Just months later, though, Takeyh told the Senate that Iranian leaders were determined to achieve hegemony in the Persian Gulf and that, from their vantage, “it is only through the attainment of the bomb that Iran can negate the nefarious American plots to undermine its stature and power.”

As the possibility of Democratic victory in the 2008 presidential election drew closer, Takeyh’s views grew more hawkish. His transformation into an Iran hawk accelerated with his brief stint in the State Department during the Obama administration’s first year. In 2010, he co-wrote a journal essay and accompanying op-ed that sought to characterize war with Iran as a natural outcome, a normalized and inevitable progression of history. Over the next couple of years, he fully realized his penchant for conflating Iran’s monitored and safeguarded nuclear energy program with a nefarious, clandestine weapons program.

This conflation is present in Takeyh’s attempted takedown of Going to Tehran, where he references Iran’s “nuclear infractions,” but provides no evidence for them other than collective Beltway wisdom, displaying a complete ignorance of what IAEA reports actually say and where such accusations actually come from (unverified American and Israeli allegations). His determination to blame only Iranian “intransigence” for the current nuclear dispute epitomizes the intellectual dishonesty for which most Washington think-tanks are unfortunately revered.

Takeyh’s analytic malfeasance extends to Iran’s domestic politics as well. His conversion from unimpressive establishment scholar to full-blown neocon fellow traveler is underscored by his remarkable insistence that Iran’s clerics are to blame for the 1953 CIA coup that overthrew Prime Minister Mohammad Mossadegh. Takeyh also refuses to understand the reality of the Green Movement in Iran, elevating them to surreal heights of organization, unity and potential.

In his review of Going to Tehran, Takeyh notes what he calls “transparent electoral fraud in the presidential election” of 2009, but again fails to advance any actual documentation to support this contention. Since 2010, he has been warning us all of Ahmadinejad’s impending consolidation of power over the Iranian government.  This didn’t happen.  Good call, Ray, how astute.

The self-serving vacuity of Takeyh’s review is especially glaring in his treatment of the Leveretts’ critique of U.S. policy toward Iran. As the Leveretts themselves have already noted, Takeyh is adamant that the U.S. has often and openly reached out diplomatically to Tehran but can’t seem to square this with reality – including statements made by his former boss, Dennis Ross, who sees the perception of failed diplomacy as necessary to sell the American public on a new illegal war against another enemy that poses absolutely no threat to the United States.