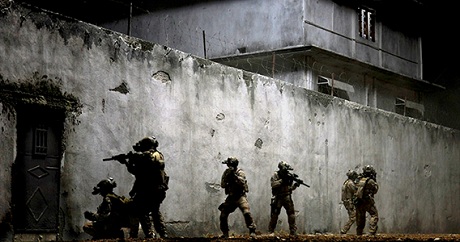 Zero Dark Thirty (ZD30) is the film narrative that tells the dramatic story of the Special Forces operation that on May 2, 2011 located and killed Osama Bin Laden in a compound on the outskirts of the Pakistani city of Abbottabad, which is not far from Islamabad. It is directed by the prominent director, Kathryn Bigelow, who had won big Hollywood awards for her brilliant 2008 film, Hurt Locker, about the impact of combat experience in Iraq on the American soldiers taking part. She knows her craft, and ZD30 captivates an audience due to its screenplay, virtuoso acting, taut plot, vividly contoured characters, insight into the mentality of CIA operatives and their bosses, and the evidently realistic portrayal of grisly torture scenes. These filmic virtues have been displaced by a raging controversy as to whether ZD30 endorses torture as a valued and effective tool against extremist enemies of the United States and seems to imply that torture was instrumental in the successful hunt for Bin Laden.

Certainly President Obama claimed and received much credit in the United States for executing this mission, and it has received very little critical scrutiny. It is hard to calculate the impact of this strike that killed Bin Laden on the 2012 election, but it many believe it made a crucial difference, at least psychologically, and particularly in relation to the outcome in swing states and with respect to the last minute decisions reached by independent voters. Such a success against Al Qaeda was registered as a major victory despite the absence of evidence that Bin Laden has been playing any significant role in Al Qaeda activities during recent years, including that of their so-called affiliates, in such countries as Yemen, Iraq, and Mali, and he was so removed from the scene of the conflict that there was serious speculation that he had died or was incapacitated long before 2011. As it did with the 9/11 attacks, the U.S. government fans the flames of suspicion by refusing to disclose the evidence relied upon to identify that the person killed at the compound in Abbottabad was indeed Bin Laden and by the related refusal even to allow journalists or others to see the body before it was unceremoniously dumped at sea (although after administering Muslim burial rituals and obtaining a quiet approval from the Saudi government, his birthplace). [Editor’s note: According to internal emails from the intelligence group STRATFOR released by Wikileaks, the supposed burial at sea was a cover and bin Laden’s body was actually returned to the U.S.]

The deeper questions, of course, are the conduct of such a military mission without the permission, or even the knowledge, of the territorial sovereign; indeed there were American military units standing by in case Pakistan found out while the operation was underway and used its own military capabilities to abort it. Also, was it legally and morally appropriate to kill Osama Bin Laden despite his being unarmed when confronted in the compound and at that point in the raid there was no resistance? It would seem clear that it would not be acceptable to the U.S. Government for other governments to carry out such an extra-judicial killing to eliminate an enemy leader living in a distant country. Would not many governments have a comparable security argument if faced with real or imagined overseas enemies? Arguably, the immensity of the 9/11 crimes and the grandiosity of Osama Bin Laden’s self-declared war against ‘the crusader’ forces of the West set him apart to some extent.

Yet, it would still seem that the particulars of this Operation Neptune Spear (the US Government code name) are ventures that only the United States, and possibly Israel, would undertake, and that their unabashed victory claim, is a notorious instance of American Exceptionalism, namely, an assertion that the United States can do what others must not dare to do, and can even provide for itself a legal rationale with the arrogant label ‘not for use by others,’ as has been the implicit message of the American debate, such as it is, about the legality of attack drones. With a posture of post-colonial insensitivity the United States is currently openly discussing ‘establishing’ a military base for drone aircraft in Africa as if such a decision could be made solely in Washington without regard for the precedent being set or the regional attitudes toward the reassertion of a Western military presence.

The discussion generated by the movie is misleadingly framed as a kind of quarrel between those who insist on ‘political correctness’ when it comes to torture and militarism and those who champion freedom of speech and the amoral conscience of the artist. Matt Taibbi ends an otherwise stellar, provocative review in Rolling Stone of ZD30 with what he must regard as an ironic closing line that speculates on how Dick Cheney would respond, as if that clinches the anti-Bigelow arguments: “Isn’t it just a crazy coincidence that he’s probably going to love it?” Bigelow doesn’t do much to unmuddy the waters by declaring herself to be “a lifelong pacifist” and then in the same LA Times op-ed (Jan. 15, 2013) ending with what sounds to me like a ringing statement of approval of what the film depicts, including its torture sequences. In Bigelow’s words, “Bin Laden wasn’t defeated by superheroes zooming down from the sky; he was defeated by ordinary Americans who fought bravely even as they sometimes crossed moral lines, who labored greatly and intently, who gave all of themselves in both victory and defeat, in life and in death, for the defense of this nation.” Besides being quite a stark departure from pacifism this observation contradicts her earlier dismissal of moral criticism: “Those of us who work in the arts know that depiction is not endorsement. If it was, no artist would be able to paint inhumane practices, no author could write about them, and no filmmaker could delve into the thorny subjects of our time.”

In the abstract, there can be no quibble with such sentiments, but let’s suppose that Picasso had coupled the unveiling of his Guernica with a glowing commentary that praised what Hitler’s and Mussolini’s pilots had accomplished by their attack on a Spanish village, insisting that the bombing of a defenseless village showed courage and resolve of the pilots who risked all in the defense of Franco’s Fascist side in the Spanish Civil War! By her insistence on being both an amoral filmmaker and an American patriot she attempts to please everyone, but ends up satisfying no one, least of all someone trying to decipher her true beliefs about such a course of behavior.

Despite purporting to be non-committal, seeking only to tell the true story of the struggle to catch Bin Laden, the film does come down quite strongly in support of those who have long contended that torture works. On the one side the movie better than any other film I have seen, makes the undertaking of torture a distasteful enterprise in the extreme that sullies the torturer along with the victim (although the film suppresses any recognition of this blowback).  At the same time, ZD30 normalizes torture as part of the routine of anti-terrorist warfare, and it scandalizes the torturers in the manner of Abu Ghraib by merging brutality toward those who are helpless with humiliation that disgusts: forcing the Muslim victim to expose his genitals in the presence of females and leading the prisoners around with a dog leash in the manner given global notoriety by Lynndie England in an Iraq prison. Anyone who sees ZD30 will at least no longer be able to take refuge behind the euphemisms of the Bush Era that denied ‘torture’ ever took place, acknowledging only what it called ‘enhanced interrogation techniques,’ practices falsely alleged to be fully consistent with international humanitarian law.

The film handles well the intense bureaucratic pressures on CIA operatives from higher up to find some ‘actionable intelligence’ and making reliance on torture part of the job description. ZD30 also conveys the atmosphere within government, or at least the CIA, as one that takes it for granted that torture elicits reliable and valuable intelligence. There is no strong countervailing pressures evident except the vague appreciation that after Bush the new man in the White House, namely Obama, genuinely dislikes torture, and is unwilling to sweep the issue under the rug of mystification by calling torture enhanced interrogation techniques. There is a derisive implication in the movie that to the extent the governmental wind is blowing in a slightly different direction in Washington the ongoing global work of imperial America will grow more difficult. There is no suggestion in ZD30 or in other contexts that Obama seeks to dismantle the American overseas empire or even to revise the role of military force in the grand strategy of the country.

The question of torture has been much discussed over the course of the last decade. It is usually defended by invoking an extreme situation, saving a city from a ‘ticking bomb’ or to locate someone about to massacre a school full of children, implying that torture will only be used when confronted by situations of exceptional and imminent danger. But the practice of torture become much more generalized once exceptions are made, as always in dealing with violent crime and politics, there is the possibility, however remote that access to information could avoid a disaster. Yet the taint of torture is not removable, and spreads; for this reason, only an unconditional prohibition, as written into international human rights law, is worthy of our moral, and political, respect.

For me, more disturbing even than the indirect whitewashing of torture is the nationalization of worldview that pervades the film (as well as the media and the political culture). There is no sense whatsoever that those who are killed or tortured might be innocent or have had unheeded grievances, or that the American response to 9/11 was killing and wounding many more thousands than had been killed by Al Qaeda, a set of responses in which whole societies being torn asunder for little or no gain in American security; in effect, massive forms of collective punishment. There is a monumental insensitivity to the sovereign rights of other states, most obviously Iraq, Pakistan, and Afghanistan. The American military is understandably focused on operational effectiveness , while it is less understandable that its political leaders remain oblivious to the rights and wellbeing of others. Implicitly, in the film and in American statecraft the lives of others are simply stage props on the geopolitical stage of political violence. In this sense, objectively considered, the killing of Bin Laden seems little more than a costly and risky venture in vengeance that glorifies a militarist conception of security that can only bring massive doses of grief to societies around the world, and does great harm to the many young Americans being asked to put their mental and physical health in mortal jeopardy for very questionable purposes that are only marginally related to the defense and security of the country. The historically high suicide, crime, and social dislocation among war veterans coming home from Iraq and Afghanistan should be heeded as a scream from the depths of the political culture rather than be treated as an awkward embarrassment that should not even factored into discussions of the costs of war.