‘Mr. Obama, Tear Down These sanctions!’ 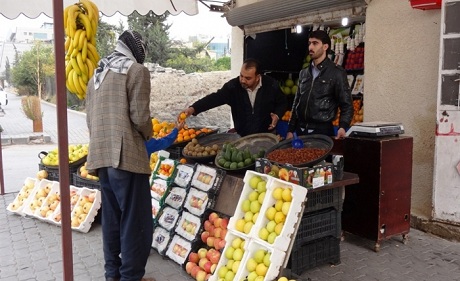 A fruit and vegetable stand in Damascus, Syria. (Heba Aly/IRIN)

A cri de coeur from a student at Damascus University…

A fruit and vegetable stand in Damascus, Syria. (Heba Aly/IRIN)

DAMASCUS — This observer has learned from time in this region that if one wants to learn what is happening on the ground politically and socially, it is fine to speak with government officials, journalists, long tenured academicians, NGO’s, and people on the street; but one of the best sources of objective information comes from university students. As explained to one official the other day, if ones sit with half a dozen graduate students, one is sure to witness and benefit from a spirited and challenging exchange with varying points of view, and few expressed without having to justify to the others one’s positions or interpretation of events.

It is for this reason that when this observer gets the chance, he heads for a college in Damascus.

Today in Syria, from the streets and cafes to the Universities, a main subject of discussion, and one that is nearly universally judged immoral and illegal, is the US-led sanctions that in effect are targeting the civilian population.

Partly as result of these brutal sanctions, today four million people in this country need of some type of humanitarian aid, and as of today, there are 637,958 registered refugees inside Syria who are in need of emergency help—a 57,000 person increase from last year at this time.

The fighting here has obviously contributed to the continuing crisis faced by the civilian population. For example, the increasingly dangerous situation means that the World Food Program (WFP) has evacuated its staff from Homs, Aleppo, Tartus Qamisly and other areas. The reason is that the past three months saw a sharp rise in the number of attacks on WFP aid trucks, which have also been hit by fuel shortages. Meanwhile, the UN refugee agency has just reported that the number of refugees fleeing the violence in Syria has leapt by nearly 100,000 in the past month. Both the Syrian Arab Republic Red Crescent Society and other NGO’s-foreign and domestic- are stretched beyond their limits and are struggling with approximately 10,000 more people in the areas they are able to assist every month being added to those in desperate need of help.

Virtually all the NGO’s here attest to the fact that if the US-led sanctions are lifted or even suspended until the spring, it would be a humanitarian gesture consistent with American claimed values. To continue to allow the dying and suffering under the weight of these sanctions suggests that we in America have learned nothing from the results of similar sanctions imposed in Iraq and Afghanistan.

The deeply inhumane US-led sanctions prevent businesses from re opening, investments from being made, financial transactions, re-supply, and other necessary economic activities, which means the basic necessities such as mazot fuel to heat homes, by as well as bread in many areas, is very hard to come. These shortages are the direct and foreseeable results of the sanctions and rebel sabotage, as to a lesser extent of Lebanese, Turkish, and other smugglers buying up the supplies and spiriting them across the borders to cash in on the black market.

As a result of the sanctions, food prices have soared beyond the means of much of the Syrian civilian population. Too many of the young, old, infirm, and impoverished are dying monthly, according to Nizar, an English literature major, as a direct and foreseeable consequence of these sanctions.

The single rational foreigners visiting Damascus hear from Washington, and what the Obama administration is telling EU countries that are becoming concerned is that the sanctions are vital to achieve regime change in Syria, and when the government falls, to be replaced but who knows what or who, the US will then lift the sanctions and remove its boot from the throats of Syria’s students and civilian population.

Nizar takes another view. “If terrorism is the killing of innocent civilians for political goals, then your government, the world’s claimed expert on terrorism, is very guilty of massive terrorism and doesn’t need to lecture anyone on this subject because this is exactly what they are doing with their sanctions in my country.”

The fervent wishes of the US-Israel and certain other governments to the contrary, regime change is not likely to happen anytime soon in Syria, according to most of the students this observer meet with; and it’s the next four months that are critical, they insist, starting today.

Syrian students follow local and regional events closely, and a common view is that from Saudi Arabia, UAE, Qatar, Jordan, and even some on Capitol Hill in Washington are coming multiple signals that all are in consultation via their intelligence services with Syria’s government in order to reach a solution because they finally concede that, despite funding and aiding the rebel panoply with guns, money, and training, the regime will survive and that the al Nusra type salafists would not be satiated by the fall of Syria but would quickly turn on Doha, Riyad, Amman, the UAE and other countries in the region.

History instructs us that sanctions do not cause regime change and those affected are not the ones wielding power. It’s the wretched, the poor, the huddled refuge seeking to survive, to paraphrase Lazarus’ inscription on our Statute of Liberty, who are being ground into early graves by American government imposed sanctions.

The political goals of the sanctions imposed on Syrian civilian are one thing—the reality, quite another. US sanctions, some still in place against Cuba after more than 53 years, were a failure, as were US sanctions in China, Vietnam, Iraq, Afghanistan, Iran, Libya, and now Syria, to name a few.

“They are all about unbridled vengeance, not rational consequences as offered in press releases from US government agencies” explained Samer, a business major from Aleppo.

Once more, much of the world, as well as history, will condemn the United States for these brutal economic crimes against a defenseless civilian population—as will American citizens and others I have met recently in Lebanon, Egypt, and Libya, who know what is happening on the ground in Syria. The overwhelming percentage does not accept and will never accept targeting innocent civilians, whether by drones or sanctions. They express feelings of shame, not just for the past 11 years of unnecessary, criminal wars of choice in this region, but for the current and continuing sanctions crime against the Syrian people.

The hatred that the U.S. government has brought to itself over more than 15 years of targeting civilians is intensifying daily because those suffering and dying here in Syria due to starvation and the effects of the now freezing temperatures in Syria do not blame their government nearly as much as American policy makers apparently hoped for. Rather, they blame, quite correctly, the U.S. government.

As one observer noted this week, “The tents are drenched. Kids are crying. Puddles of water are all over…I am walking; my shoes are covered with rainwater. I can’t remember being so cold. I don’t even want to think about more than half of those living in my area. Something has to be done.”

We American are demonstrating yet again to the world that we have the power to destroy civilian populations. But we are better than that as a people. And in the words of Oregon’s late Senator Wayne Morse, “each one of us has a personal obligation to change, by all legal means necessary, our government’s criminal acts.”

Sitting at our table in the student union refectory at Damascus University on January 9, Rana, a passionate and, on that occasion, indignant history student majoring in American history and culture may have reflected accurately the views of many on Syrian campuses these days.

Rana wished out loud to us that she could tell Barack Obama face to face: “Mr. President, in 1987 on the 750th anniversary of Berlin, your predecessor Ronald Reagan, spoke about the importance of human dignity and challenged Russian leader Gorbachev, to ‘tear down this wall.’ In 2013, we students and our families from Damascus, the city of Jasmine, which was inhabited as early as 8,000 BC, and whose livelihood, opportunities and hope you are destroying today for no sane reason, urge you to ‘tear down these sanctions’, come to Syria, visit our campus, and engage in dialogue with us.”

The Syrians are a great people. Rana, and her student colleagues, are a credit to Syria and to all humanity.