Hamas, Khaled Mashaal, and Prospects for a Sustainable Israel-Palestine Peace 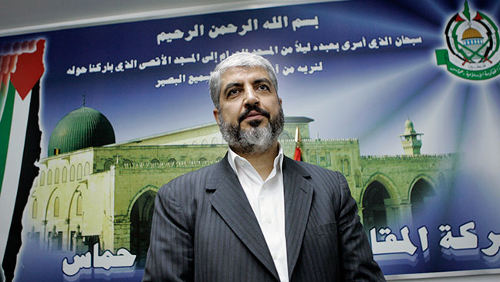 In the aftermath of Khaled Mashaal’s emotional visit to Gaza in celebration of Hamas’ 25th anniversary, commentary in Israel and the West has focused on his remarks at a rally as ‘defiant’ and disclosing ‘the true face’ of Hamas. Emphasis was particularly placed on his dramatic pledge to recover the whole of historic Palestine, from the Mediterranean to Jordan, “inch by inch,” no matter how long such a process might take. Mashaal also challenged the legitimacy of the Zionist project, and justified Palestinian resistance in whatever form it might assume, although disavowing the intention to attack civilians as such, and denying any complicity by Hamas in the November 21, 2012 incident in Israel when a bomb exploded in a Jerusalem bus.

These remarks certainly raise concerns for moderate Israelis who continue to advocate a two-state solution in accordance with UN Security Council Resolution 242, but at the same time, it is important to listen to Hamas fully before reaching any firm conclusions. What Mashaal said in Gaza was at a rally dedicated to reaffirming its fundamental struggle in the immediate aftermath of the recent 8 day Israeli attack (code-named Pillar of Defense), and by a leader who for the first time in 45 years had openly dared to set foot in his occupied and oppressed homeland. Mashaal is a leader who has lived in exile in several countries of the region since he was 11 years old, having been born in the Selwad neighborhood of Ramallah, then under Jordanian control. He is someone who in 1997 Israel had tried to murder in a notorious incident in Jordan in which only the capture of the Mossad perpetrators induced Israel to supply a life-saving antidote for the poison that had been sprayed into Mashaal’s ear in exchange for their release from Jordanian captivity. In Mashaal’s imagery, this return to Gaza was his ‘third birth,’ the first being in 1956 when he was born, the second when he survived the Israeli assassination attempt, and the third when he was able to kiss the ground upon entering Gaza. These biographical details seem relevant for an assessment of his public remarks.

The context was also given a heightened reality by the Hamas/Gaza success in enduring the latest Israeli military onslaught that produced a ceasefire that contained some conditions favoring Gaza, including an Israeli commitment to refrain from targeted assassinations in the future. It also was a context shaped by recent and more distant painful memories that was the main trigger of the upsurge of violence, especially the assassination of the Hamas military leader and diplomat, Ahmed al-Jabari, and the May 22, 2003 killing of the disabled spiritual founder of Hamas, Sheikh Ahmed Yassin. It was after Sheikh Yassin’s death that Mashaal was declared ‘world leader’ of Hamas.

The most important element of context that needs to be taken into account is the seeming inconsistency between the fiery language used by Mashaal in Gaza and his far more moderate tone in the course of several interviews with Western journalists in recent weeks. In those interviews Mashaal had clearly indicated a readiness for a long-term hudna, or truce, provided that Israel ended its occupation of the West Bank, East Jerusalem, and Gaza, and agreed to uphold Palestinian rights under international law. He made clear that these rights included the right of return belonging to the 4-5 million Palestinians living in refugee camps or exile, and contended that such a right was more deserving of recognition than is the Israeli grant of such a right of return to every Jew even to those completely without a prior connection to historic Palestine. Of course, this claimed right is in its potentiality a threatening claim to Israel, and to Zionism, as it could, at least in theory, threaten the Jewish majority presence in Israel. Whether many Palestinians if given the choice would return to live in Israel so as to reinhabit their ancestral homes seems highly questionable, but the right to do so unquestionably belongs to Palestinians, at least to those who had previously resided in present Israel.

In these interviews, Mashaal was consistent about the readiness of Hamas to pursue these national goals nonviolently, without “weapons and blood”, if Israel were to accept such a framework for peace. His words to CNN in a November 22nd interview are notable in this respect: “We are ready to resort to a peaceful way, purely peaceful way without blood and weapons, as long as we obtain our Palestinian demands.” The extent of “Palestinian demands” was left unspecified, which does create an ambiguity as to whether this meant accommodation or some kind of rearticulation of a unified Palestinian entity. Also unclear as to whether the peaceful path could precede the end of occupation, or must be a sequel to the existence of a state. In the other direction, Mashaal indicated that once Palestinian statehood was fully realized, then the issue of the acceptance of Israeli legitimacy could be placed on the political agenda. His deputy, Mousa Abu Marzook, in a conversation in Cairo told me in a similar vein that the Hamas Charter pledge to destroy the Zionist state had become “a false issue.” This PhD from Louisiana Tech, an intelligent exponent of Hamas thinking, echoed Mashaal’s moderate approach, and indicated that as with the U.S. Constitution’s treatment of slavery, the Hamas Charter has evolved with changing circumstances, and its clauses subject to modification by interpretation.

Along similar lines, Mashaal has spoken about Hamas as ‘realistic’ with respect to an appreciation of the balance of forces relative to the conflict, and referred to Arafat’s response to those who insisted that Israel would be at mortal risk if a Palestinian state were to be established on the West Bank. The former PLO leader had pointed out that any Palestinian move to threaten Israel militarily in such circumstances was unthinkable. It would be sure to produce a devastating attack that would crush Palestinian hopes forever.

There is posed a fundamental question: what is the true voice of Hamas? There seems to be a sharp contrast between the fiery language of Mashaal’s words spoken at the anniversary demonstration in Gaza and his far calmer and accommodating tone in interviews and other statements in recent years.  The more hopeful understanding would suggest a gap between the emotional occasion of the speech and the more rational views consistently expressed elsewhere. Such an explanation is the opposite of the Western insistence that only the rally speech gave expression to the authentic outlook of Hama. In contrast, I would accord greater weight given to the moderate formulations, at least for exploratory purposes. Put differently, in Gaza, Mashaal was likely expressing a maximalist version of the Palestinian narrative relating to its sense of legitimacy while in more reflective arenas, ever since the entry of Hamas into electoral politics back in 2006, its dominant emphasis has been on pursuing a political track that envisioned long-term peaceful co-existence with Israel, a sidestepping of the legitimacy issues, at least once the occupation was definitively ended and the rights of Palestinian refugees was recognized in accordance with international law.

It can be asked, ‘How can Hamas dare to put forward such a claim in view of the steady rain of rockets that has made life treacherous and miserable for the more than a million Israelis living in the southern part of Israel ever since Israel ‘disengaged’ in 2005?’ Such a rhetorical question repeated over and over again without reference to the siege or Israeli violence has distorted the Western image of the interaction, suggesting that when Israel massively attacks helpless Gaza it is only exercising its defensive rights, which is the most fundamental entitlement of every sovereign state. Again, the more accurate interpretation depends on a fuller appreciation of the wider context, which would include the American plot to reverse the outcome of the 2006 electoral victory of Hamas by arming Fatah with heavy weapons, the Israeli punitive blockade since mid-2007, [Vanity Fair, 2008] and many instances of provocative Israeli violence, including a steady stream of targeted assassinations and lethal over-reactions at the Gaza border. Although not the whole story, the one-sided ratio of deaths as between Israel and Palestine is a good first approximation of comparative responsibility over the period of Hamas ascendancy in Gaza, and it is striking. For instance, between the ceasefire in 2009 and the Israeli attack in November 2012, 271 Palestinians were killed and not a single Israeli. [B’Teselm report] The respected Haaretz columnist, Gideon Levy, has pointed out that since the first rockets were launched against Israeli in 2001, 59 Israeli have died as compared to 4,717 Palestinians.

The Western media is stunningly oblivious to these complications of perception, almost never disclosing Israeli provocations in reporting on the timelines of the violence of the parties, and fails to acknowledge that it has been the Israelis, not the Palestinians, that have been mostly responsible for ending periods of prolonged truce. There are further confusing elements in the picture, including the presence of some extremist Palestinian militias that launch rockets in defiance of Hamas policy, which in recent years generally limits rockets to retaliatory roles. Among the ironies of the al-Jabari assassination was that it was evidently his role to restrain these militias on behalf of Hamas, including disciplining those extremists who refused to abide by policies of restricting rocket attacks to retaliatory situations.