U.S./Israel Lose Twice in the U.N. 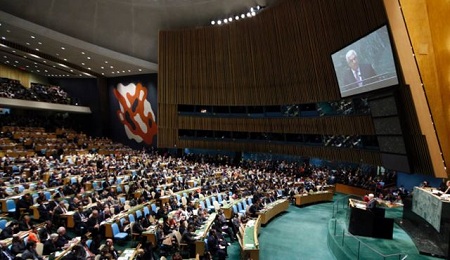 The UN General Assembly has delivered two major defeats to Israel in the last two weeks. The governments of the U.S. and Israel are furious.

On Nov. 29, UN member states voted 138-9 with 41 abstentions to advance Palestine’s status from a non-member “observer entity” to non-member “observer state.” Palestinian President Mahmoud Abbas brought the statehood issue to the world body arguing that a “yes” vote was the “last chance to save the two-state solution.”

On Dec. 3 the General Assembly voted 174-6 with 6 abstentions to insist nuclear-armed Israel join the Nuclear Nonproliferation Treaty. To do so would oblige the right wing Netanyahu regime to permit the International Atomic Energy Agency to periodically inspect Israel’s nuclear arsenal to determine if it is in compliance with treaty obligations. (The six “no” voters were the U.S., Israel, Canada, Marshall Islands, Micronesia and Palau.)

Had these votes been taken in the more powerful Security Council, they would have failed due to a veto by the Obama Administration. So far, Washington has vetoed over 40 resolutions critical of Israel’s actions toward the Palestinians and its neighbors. At other times, the simple threat of an American veto was sufficient to quash efforts to condemn Israel for what amounted to war crimes.

In presenting his resolution Abbas adopted a moderate tone: “We did not come here seeking to delegitimize a state established years ago, and that is Israel. Rather we came to affirm the legitimacy of a state that must now achieve its independence and that is Palestine.” He also declared that “the moment has come for the world to say clearly: enough of aggression, enough of settlements and occupation.”

The General Assembly recognizes Palestine as a UN observer state, which is an important accomplishment, but it is not a state in fact. Netanyahu and his ultra-right coalition partners are determined to torpedo the possibility of conducting honest negotiations leading to two separate states. At the moment there is one Jewish State (as it describes itself) with a generally unequal minority of Palestinian citizens, and two attached Palestinian colonies or reservations — the West Bank and Gaza.

“Today’s unfortunate and counterproductive resolution places further obstacles in the path for peace,” commented American Ambassador Susan Rice. Netanyahu charged: “This is a meaningless resolution that won’t change anything on the ground.” He then repeated the excuse that a Palestinian state is impossible until Israel’s security is ensured — a circumstance that may never materialize as long as the country is controlled by far right, right and center right governments devoted to exacerbating the insecurities of the people.

Although the matter wasn’t publicly addressed, perhaps the main U.S.-Israeli objection to the ruling is that as an “observer state” the Palestinians will have standing with the International Criminal Court. As such it will be possible to launch legal proceedings against Israel for various infractions including war crimes under international law.

As usual after any affront (such as the UN vote), the Israeli government retaliated. Just after the observer state vote, the New York Times reported: “Israel is moving forward with development of Jewish settlements in a contentious area east of Jerusalem, defying the United States by advancing a project that has long been condemned by Washington as effectively dooming any prospect of a two-state solution to the Israeli-Palestinian conflict.” The action would limit access to the West Bank cities of Ramallah and Bethlehem from Jerusalem

Secretary of State Clinton, in a Washington speech after Israel’s settlement announcement, declared that “These activities set back the cause of a negotiated peace.” At the same time she criticized the UN vote on Palestine’s observer state status and said: “America has Israel’s back, and this month we proved it again.”

The General Assembly’s chastisement of Israel’s clandestine nuclear weapons and delivery systems came a few days later. It is an open secret that Israel possesses about 200 such weapons, but does not admit to having any. Backed by the U.S. it has refused to join the Nuclear Nonproliferation Treaty (NPT), and brushed aside the UN new vote.

The nuclear resolution also included support for a conference to ban nuclear weapons from the Middle East. According to the Associated Press: “All the Arab nations and Iran had planned to attend the conference in mid-December in Helsinki, Finland, but the United States announced on Nov. 23 that it wouldn’t take place, citing political turmoil in the region and Iran’s defiant stance on nonproliferation. Iran and some Arab nations countered that the real reason for the cancellation was Israel’s refusal to attend.”

The U.S. opposes the call for a nuclear–free Middle East because it wants Israel to continue functioning as its nuclear surrogate in the Middle East. Possession of the ultimate weapon also makes Israel the military superpower of the entire region, a designation at thundering odds with its continual pose as an insecure, vulnerable state.

President Obama, backed forcefully by Netanyahu, has imposed ever-increasing economic and trade sanctions on Iran because it allegedly seeks to build a nuclear weapon — a charge refuted by U.S intelligence agencies which state Iran gave up any nuclear ambitions several years ago. The Tehran government denies it is making a bomb and there is no proof to substantiate the U.S.-Israeli claims.

Ironically, Iran is a member of the NPT, allows periodic inspections by the International Atomic Energy Agency and has been calling for a ban on nuclear weapons in the Middle East for years.

Washington could eliminate the “danger” of an Iranian weapon by supporting a regional ban — which is backed by the entire Arab League as well as Iran. But the real point is regime change in Iran. The nuclear issue provides a justification for killer sanctions and threats of war — actions intended to create sufficient economic and social crises to topple the government and perhaps create such havoc a pro-American or neutral regime might take over.

All of this could end — the plight of the Palestinian people, the harmful sanctions against Iran and its people, nuclear weapons in the Middle East, the invasions and forced changes in regime— if the American people finally bring a peace-minded and anti-imperialist progressive or left president and party to power. Until then, what you see (and what is concealed or fabricated for public consumption) is what you get.