Why Louis Freeh Should Be Investigated For 9/11 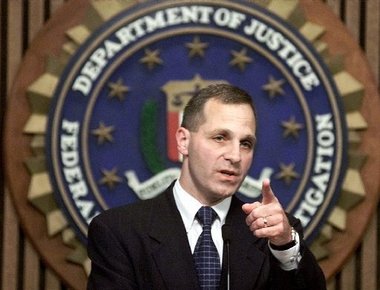 In the summer of 2001, Federal Bureau of Investigation (FBI) agent Robert Wright, a counterterrorism expert from the Chicago office, made some startling claims about the Bureau in a written statement outlining the difficulties he had doing his job.  Three months before 9/11, he wrote: “The FBI has proven for the past decade it cannot identify and prevent acts of terrorism against the United States and its citizens at home and abroad.  Even worse, there is virtually no effort on the part of the FBI’s International Terrorism Unit to neutralize known and suspected terrorists residing within the United States.”[1]

Revelations since 9/11 have confirmed Wright’s claims.  FBI management did little or nothing to stop terrorism in the decade before 9/11 and, in some cases, appeared to have supported terrorists.  This is more disturbing considering that the power of the FBI over terrorism investigations was supreme.  In 1998, the FBI’s strategic plan stated that terrorist activities fell “almost exclusively within the jurisdiction of the FBI” and that “the FBI has no higher priority than to combat terrorism.”[2]

A number of people are suspect in these failures, including the leaders of the FBI’s counterterrorism programs.  But at the time of Wright’s written complaint, which was not shared with the public until May 2002, the man most responsible was Louis Freeh, Director of the FBI from 1993 to 2001.

Agent Wright was not FBI leadership’s only detractor, and not the only one to criticize Freeh.  The public advocacy law firm Judicial Watch, which prosecutes government abuse and corruption, rejoiced at the news of Freeh’s May 2001 resignation.[3]  Judicial Watch pointed to a “legacy of corruption” at the FBI under Freeh, listing the espionage scandal at Los Alamos National Laboratories, as well as “Filegate, Waco, the Ruby Ridge cover-up, the Olympic bombing frame-up of Richard Jewell, [and] falsification of evidence concerning the Oklahoma City bombing.”[4]

Judicial Watch said that Director Freeh believed he was above the law.  The group went on to say that Freeh was “a man so corrupt he destroyed the office he led, and a man so cowardly he refuses to face the music for the illegalities he has allegedly committed.”[5] To this was added a claim that the FBI under Freeh was being directed by sinister yet unknown forces. “In case after case throughout the 1990′s, the FBI seems to have tailored its investigative efforts to fit somebody’s pre-arranged script. The question is, who wrote that script — and why?”

Prior to his appointment by President Clinton, Freeh was a federal judge.  He had been selected for that position by President George H.W. Bush in 1991.  Before that, Freeh had been an Assistant District Attorney for the Southern District of New York and an FBI field agent.

Freeh was involved with U.S. counter-terrorism efforts for many years prior to his appointment as FBI Director in 1993.  As an FBI agent he worked for the New York Field Office, which led the FBI’s counterterrorism effort.  It was later the lead field office for Bin Laden investigations and was the first to establish a Joint Terrorism Task Force (JTTF) of state and federal law enforcement and intelligence personnel.  Freeh worked there for seven years until he was promoted to Assistant U.S. Attorney in 1981.  Throughout the 1980s, Freeh worked with or for U.S. Attorney Rudy Giuliani, who was mayor of New York City on 9/11.

Although Clinton was a Democrat, after his appointment as FBI Director Freeh immediately began forming alliances with Republicans in Congress. This apparently caused difficulty between the FBI and Clinton’s White House.  Freeh also developed a secret relationship with his former supporter, former President George H. W. Bush. He used that relationship to communicate with the Saudi royal family without Clinton’s knowledge.[6]

Just five months before Freeh’s appointment as FBI Director, the World Trade Center (WTC) was bombed in an attack that killed six people and wounded a thousand others.  It was blamed on a Pakistani-Kuwaiti by the name of Ramzi Yousef, along with about half a dozen others.  However, as the New York Times reported, it was clear that the FBI was somehow involved as well.

Law-enforcement officials were told that terrorists were building a bomb that was eventually used to blow up the World Trade Center, and they planned to thwart the plotters by secretly substituting harmless powder for the explosives, an informer said after the blast.

The informer was to have helped the plotters build the bomb and supply the fake powder, but the plan was called off by an F.B.I. supervisor who had other ideas about how the informer, Emad A. Salem, should be used, the informer said.[7]

The 1993 WTC bombing was a terrorist operation that had been infiltrated by the FBI but the role that the FBI played in trying to prevent that operation, or allow it to go forward, has never been revealed.  What has been revealed is that forensic data was falsified and “conclusions were altered to help the government’s case.”[8] These facts were revealed by Frederick Whitehurst, the chemist and supervisory special agent in charge of the FBI’s crime lab who became a whistleblower.  The altered conclusions that Whitehurst described were made under the leadership of Louis Freeh.

A similar case occurred in April 1995, when the Murrah Federal Building in Oklahoma City (OKC) was bombed, killing 168 people including 19 children.  Investigators have since learned that the FBI played a role in that bombing as well.  Reasons that the OKC bombing was suspicious include the fact that there were secondary explosives found in the building that were not reported as part of the official account.  And as with the events of 9/11, the FBI immediately confiscated, and refused to release, security videos that would have revealed what actually happened.[9]

Freeh’s colleague and personal friend, Larry Potts, was the FBI supervisor who was responsible for the tragedies at Ruby Ridge in 1992, and Waco in 1993.  Potts was then given responsibility for investigating the Oklahoma City bombing.[10]  Later it was claimed by one of the convicted conspirators that lead bomber Timothy McVeigh was actually acting under the direction of Potts.[11]  As an apparent reward for Potts’ performance, in May 1995 Freeh promoted him to be his number two man as Deputy Director of the FBI.  Two months later, Freeh removed Potts from that position due to public outrage at the appointment.

On the FBI links to the OKC bombing, author Peter Dale Scott wrote:

One such case of a penetrated operation “gone wrong” in 1993 might be attributed to confusion, bureaucratic incompetence, or the problems of determining when sufficient evidence had been gathered to justify arrests. A repeated catastrophe two years later raises the question whether the lethal outcome was not intended.[12]

The result of the OKC bombing in governmental terms was the passage of a new anti–terrorism law in April 1996.  This was a bill that would be mirrored by the USA Patriot Act six years later, and it was described as representing an assault on civil liberties.  The Houston Chronicle called the bill a “frightening” and “grievous” attack on domestic freedoms. But Louis Freeh supported it.

Because many Congressional representatives opposed the bill, it was passed only after having been watered down.  In Freeh’s words, it had been “stripped… of just about every meaningful provision.”[13] Freeh’s call for this legislation to be more restrictive of civil liberties must be considered with the fact that his agency was accused of facilitating the event that precipitated the legislation.

One of the obstacles often cited as a root cause for the FBI not doing its anti-terrorism job effectively was “the Wall.”  This was a set of procedures that restricted the flow of information between law enforcement officers pursuing criminal investigations and officers pursuing intelligence information via the Foreign Intelligence Surveillance Act (FISA).  The procedures, set out in a 1995 memo from deputy attorney general (and future 9/11 Commissioner) Jamie Gorelick, were seemingly intended to prevent the loss of evidence, due to technicalities, that might be obtained via a FISA warrant.[14]  Because such losses were never actually experienced, later claims about “the Wall” appear to be weak excuses to explain why information was not shared or actions were not taken.

In July 1996, TWA Flight 800 crashed into the Atlantic Ocean just after taking off from JFK Airport in New York, killing all 230 people on board.  Freeh later claimed that “No one knew what brought it down.”[15] Curiously, the FBI took over the investigation despite the fact that the National Transportation Safety Board (NTSB) had priority over the investigation as established by law.  FBI agents then blocked attempts by the NTSB to interview witnesses.[16]