Is The Syrian Opposition Falling Apart? 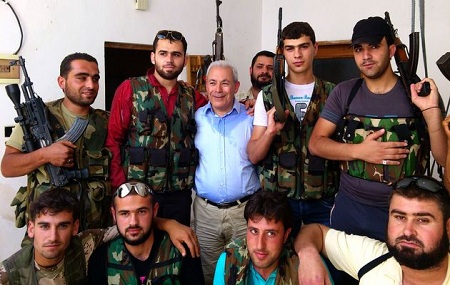 On October 30th, Josh Rubin at Foreign Policy wrote in his blog that Syrian opposition was to “convene in Qatar next week to form a new leadership body to subsume the opposition Syrian National Council, which is widely viewed as ineffective, consumed by infighting, and little respected on the ground.”[1] This push for reform seems to be coming completely from the United States as a Turkish daily, Today’s Zaman, reported that

Dr.Radwan Ziadeh, the executive director of the Syrian Center for Political and Strategic Studies, said that “no county around the world can impose a leader on the Syrian opposition” and went on to say that the initiative to form an opposition “belongs to Syrians only.”[2]

While it may seem that Dr. Ziadeh is concerned about the overall movement, in reality, the Syrian National Council is currently at odds with the restructuring process as they are worried about losing influence in the new organization. The opposition is to be recreated in the form of the Syrian National Initiative which is to include fighters, political groups, and local councils, in which the SNC’s “influence would be diluted significantly.” Yet, Washington is pushing for the new group as many have noted that “opposition disarray has held back more robust foreign involvement behind the opposition in its fight to topple Assad.”[3] Thus, this reformation of the rebels is nothing more than an attempt to go and work towards the overall goal of taking Assad out of the picture.

Interestingly enough, the US representative to this meeting is US ambassador to Syria, Robert Ford, who “has been dealing with various opposition groups and weighing in on the composition of the new council;”[4] despite this, however, Ford has had a history of being involved with organizing violent groups. According to Michel Chossudovsky, from January to October 2011, Ford “played a central role in laying the groundwork within Syria as well as establishing contacts with opposition groups” and in Iraq he

was U.S. representative in January 2004 to the Shiite city of Najaf in Iraq. Najaf was the stronghold of the Mahdi army. A few months later he was appointed “Number Two Man” (Minister Counsellor for Political Affairs), at the US embassy in Baghdad at the outset of John Negroponte’s tenure as US Ambassador to Iraq (June 2004- April 2005). Ford subsequently served under Negroponte’s successor Zalmay Khalilzad prior to his appointment as Ambassador to Algeria in 2006.

Robert S. Ford’s mandate as “Number Two” (Minister Counsellor for Political Affairs) under the helm of Ambassador John Negroponte was to coordinate out of the US embassy, the covert support to death squads and paramilitary groups in Iraq with a view to fomenting sectarian violence and weakening the resistance movement.[5] (emphasis added)

Thus, one must be suspect that the same man who has had experience organizing death squads in Iraq would be sent over to aid the Syrian opposition in their restructuring.

While Ford may be good at creating violent groups, it may not mean a thing if the Syrians themselves cannot get along to carry out the US agenda. The Star Ledger reported on October 4th that “Sharp disagreements arose Sunday on the first day of a Syrian opposition conference meant to forge a more cohesive leadership” and that the SNC dismissed the optimism of Raid Seif, whose plan for changing the opposition involves creating a new leadership group of about 50 members, with more influence from military commanders and local leaders. SNC chief Abdelbaset Sieda stated that he and others in the SNC no longer trust promises of international support that are linked to restructuring of the opposition.

“We faced this situation before, when we formed the SNC (last year),” he told The Associated Press. “There were promises like that, but the international community in fact did not give us the support needed for the SNC to do its job.”[6]

Currently, whether or not the SNC will accept the Seif’s plan is currently unknown. It seems that the Syrian opposition may very well be fracturing at the seams and that Washington’s hopes to decimate Syria could potentially collapse.