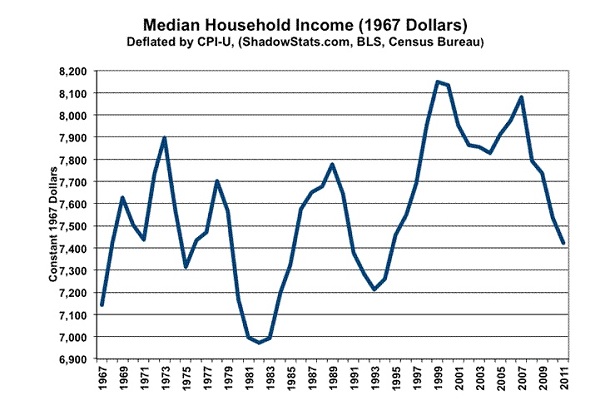 In my opinion, the Federal Reserve’s purchase of bonds in order to drive down interest rates has produced a bond market bubble that is larger than the real estate and derivative bubbles. Economically, it is nonsensical for a bond to carry a negative real interest rate, especially when the government issuing the bond is running large budget deficits that it seems unable to reduce and when the central bank is monetizing the debt.

The bubble has been protected by the euro “crisis,” which possibly is more of a virtual crisis than a real one. The euro crisis has caused money to seek refuge in dollars, thus supporting the dollar’s value even while the Federal Reserve prints money with which to purchase the never-ending flow of the governments’ bonds to finance trillion dollar plus annual budget deficits—about 5 times the “Reagan deficits” that Wall Street alleged would wreck the US economy.

Indeed, the US dollar’s exchange value is itself a bubble waiting to pop. The sharp rise in the dollar price of gold and silver since 2003 indicates a flight from the US dollar. (The chart is courtesy of John Williams, shadowstats.com.) 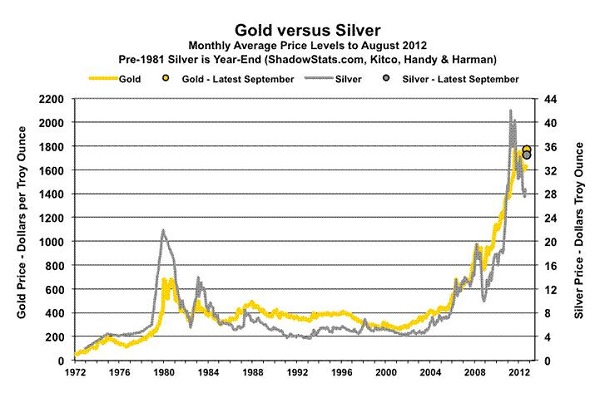 The bond market bubble will pop if the dollar bubble pops. The Federal Reserve can sustain the bond market bubble by purchasing bonds, and there are no limits on the Federal Reserve’s ability to purchase bonds. However, the endless monetization of debt, even if the new money is stuck in the banks and does not find its way into the economy, can spook foreign holders of dollar-denominated assets.

Foreign central banks can decide that they want to hold fewer dollars and more precious metals as their reserves. Other countries, sensing the US dollar’s demise, are organizing to conduct their trade without the use of the world’s reserve currency. Brazil, Russia, India, China, and South Africa intend to conduct their trade with one another in their own currencies. China and Japan have also negotiated to settle their trade balances with one another in their own currencies.

These agreements substantially reduce the use of the US dollar in international trade and, thus, the demand for dollars. When demand falls, so does price, unless the supply shrinks. But the Federal Reserve has announced, essentially, unlimited supply of US dollars. So we are faced with a paradox. The US dollar is supposed to remain valuable despite its enormous increase in supply.

In addition, China, America’s largest creditor and in the past a reliable purchaser of US Treasury bonds, holds some two trillion in dollar-denominated assets, primarily Treasury bonds. How is Washington treating its largest foreign creditor? Not with appreciation or deference. Washington is surrounding China with naval and air bases, interfering in China’s disputes with other countries, and bringing contrived actions against China in the World Trade Organization. Washington claims that US corporations are deserting the US not because of the lower cost of labor in China, but because of Chinese “subsidies” to the relocated US firms.

In my April 30 column, “Brewing a Conflict with China,” I wrote that Washington would like to substitute a cold war with China for the hot wars in the Middle East. The problem with the hot wars is the loss of superpower face from Washington’s inability to prevail after eleven years, and although the hot wars are profitable for the military/security complex, the wars don’t generate the level of profits that would flow from a high-tech arms race with China. Moreover, Washington believes that diverting Chinese investment from the economy into a military buildup would slow the rate at which the Chinese economy is overtaking the US economy.

What if instead of taking the bait from Washington, China targets Washington’s Archilles heel—the dollar’s role as reserve currency—and decides it is cheaper to dump one trillion dollars of US Treasury debt on the bond market than to commit to a 30 year arms race? To keep the price of Treasuries from collapsing, the Federal Reserve could print the money to buy the bonds. But if China then dumps the printed one trillion dollars in the foreign exchange markets, Washington cannot print euros, British pounds, Russian rubles, Swiss francs, and other currencies in order to buy up the dollars.

Frantic, Washington would try to arrange currency swaps with foreign countries in order to acquire the foreign exchange with which to buy up the dollars that, otherwise, will drive down the dollar exchange rate and destroy the Federal Reserve’s control over interest rates.

But if the Chinese don’t want the dollars, will other countries want to swap their currencies for the abandoned US dollar?

Sooner or later the dollar will collapse from Washington’s abuse of the dollar’s role as reserve currency, and the dollar will lose its “safe haven” status. US inflation will rise, and US political stability, along with America’s hegemonic power, will wane.

The rest of the world will sigh with relief. And China will have defeated the superpower without an arms race or firing a shot.