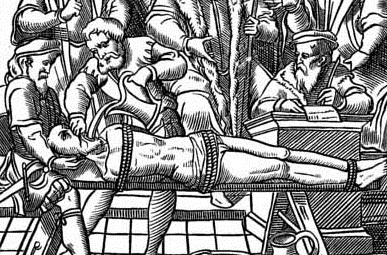 "The Water Torture.— Facsimile of a Woodcut in J. Damhoudère's Praxis Rerum Criminalium: in 4to, Antwerp, 1556" (Wikimedia Commons). The U.S. has used the medieval torture method of waterboarding on prisoners in its so-called "war on terrorism".

“The Water Torture.— Facsimile of a Woodcut in J. Damhoudère’s Praxis Rerum Criminalium: in 4to, Antwerp, 1556” (Wikimedia Commons). The U.S. has used the medieval torture method of waterboarding on prisoners in its so-called “war on terrorism”.

On May 31, 2010, the Israeli right-wing government sent armed military troops to illegally board in international waters Gaza aid ships of the Gaza Freedom Flotilla organized by the Free Gaza Movement and the Turkish Foundation for Human Rights and Freedoms and Humanitarian Relief. The Israelis murdered eight Turkish citizens and one US citizen in cold blood.  Many others were wounded by the forces of “the only democracy in the Middle East.”

Despite the murder of its citizen, Washington immediately took the side of the crazed Israeli government. The Turks had a different response. The prime minister of Turkey, Erdogan, said that the next aid ships would be protected by the Turkish navy.  But Washington got hold of its puppet and paid him to shut up. Once upon a time, the Turks were a fierce people.  Today they are Washington’s puppets.

We have witnessed this during the past week. The Turkish government is permitting the Islamists from outside Syria, organized by the CIA and Israel, to attack Syria from Turkish territory. On several occasions a mortar shell has, according to news reports if you believe them, fallen just inside the Turkey border. The Turkish military has used the excuse to launch artillery barrages into Syria.

People who with good cause no longer believe the US and western media or the US and western governments think that the mortar shells were fired by US or Israeli operatives, or by the “rebels” they support, in order to give Turkey the excuse to start a NATO war with Syria.  A UN sanctioned NATO invasion or air strikes, as in Libya, has been blocked by the Russians and Chinese. But if Syria and Turkey get into a war, NATO must come to the aid of its NATO member, Turkey.

Washington knows this, which is one reason why Washington began its assertion of world hegemony in the Muslim Middle East.

In the West, the Ministry of Propaganda continues to talk about the “Syrian revolt.”  There is no revolt. What has happened is that the US and Israel have equipped with weapons and sent into Syria Islamists who wish to overthrow the secular Syrian government. Washington knows that if the Syrian government can be destroyed, the country will dissolve into warring factions like Iraq and Libya.

America’s European and Japanese puppet states are, of course, part of Washington’s operation.  There will be no complaints from them. But why is the rest of the world content for Washington to interfere in the sovereign affairs of nations to the point of invading, sending in drones and assassination teams, and murdering vast numbers of citizens in seven countries?

Does this acquiescence mean that the world has accepted Washington’s claim that it is the indispensable country with the right to rule the world?

Why, for example, do Russia and Venezuela permit the US government to fund their political opposition?

The one-party American state has no political opposition.  But imagine if it did. Would Washington tolerate the funding of its opposition by Russia or Venezuela?  Obviously not. Those running against America with foreign money would be arrested and imprisoned, but not in Venezuela or Russia, countries where, apparently, treason is legal.

This would be an amazing margin of victory in a US presidential election. However, in his previous reelection Chavez won by 27%.  Obviously, Washington’s money and the propaganda activities of the US-financed Non-Governmental Organizations succeeded in swaying Venezuelans and reducing Chavez’s margin of victory to 10%. Washington’s interference is a massive barrier to leadership in other countries.  Fully 44% of the Venezuelan people were too brainwashed or too stupid to vote for their own country’s candidate and voted instead for Washington’s candidate.

As a high government official once told me, “Empire costs us a great deal of money.”

Washington has to pay its puppets to represent Washington instead of their own peoples.

Washington in its hubris forgets that its rule is purchased and not loved. Washington’s puppets have sold their integrity and that of their countries for filthy lucre.

When the money runs out, so does the empire.

By then the American people will be as corrupted as the foreign “leaders.”  In his review of The United States And Torture, edited by Marjorie Cohn (New York University Press, 2011) in the Fall 2012 Independent Review, Anthony Gregory writes:

“In Reagan’s America, a common theme in Cold War rhetoric was that the Soviets tortured people and detained them without cause, extracted phony confessions through cruel violence, and did the unspeakable to detainees who were helpless against the full, heartless weight of the Communist state. As much as any other evil, torture differentiated the bad guys, the Commies, from the good guys, the American people and their government. However imperfect the U.S. system might be, it had civilized standards that the enemy rejected.”

By 2005, a year after torture photos from Abu Ghraib were leaked, polls of Americans showed that 38% had succumbed to the propaganda that torture was justified in some circumstances. After four more years of neoconservative advocacy of torture, an Associated Press poll reported in 2009 that 52% of Americans approved of torture.

Torture apparently was an instrument of US cold war policy. Torture was taught to Latin American militaries by the US School of the Americas, which operated in Panama and subsequently at Fort Benning, Georgia. However, this was a clandestine operation.  It awaited the neoconservative Bush regime for US Department of Justice (sic) attorneys, graduates of the best law schools, to write legal memos justifying torture despite US statutory and international laws prohibiting torture, and for both the president and vice president of the United States to openly acknowledge and justify torture. Some of the criminals who wrote these memos are now teaching in prestigious law schools. One was appointed to the federal judiciary and sits as a judge sentencing others for their offenses.

We can conclude with Anthony Gregory that it is not only foreign political regimes that are corrupted by Washington’s evil, but also Americans themselves.  “Nothing better demonstrates the moral degeneracy of American political culture than the U.S. torture state.”

Washington still masquerades wearing the white hat, and most of the rest of the world is paid to go along with the masquerade.